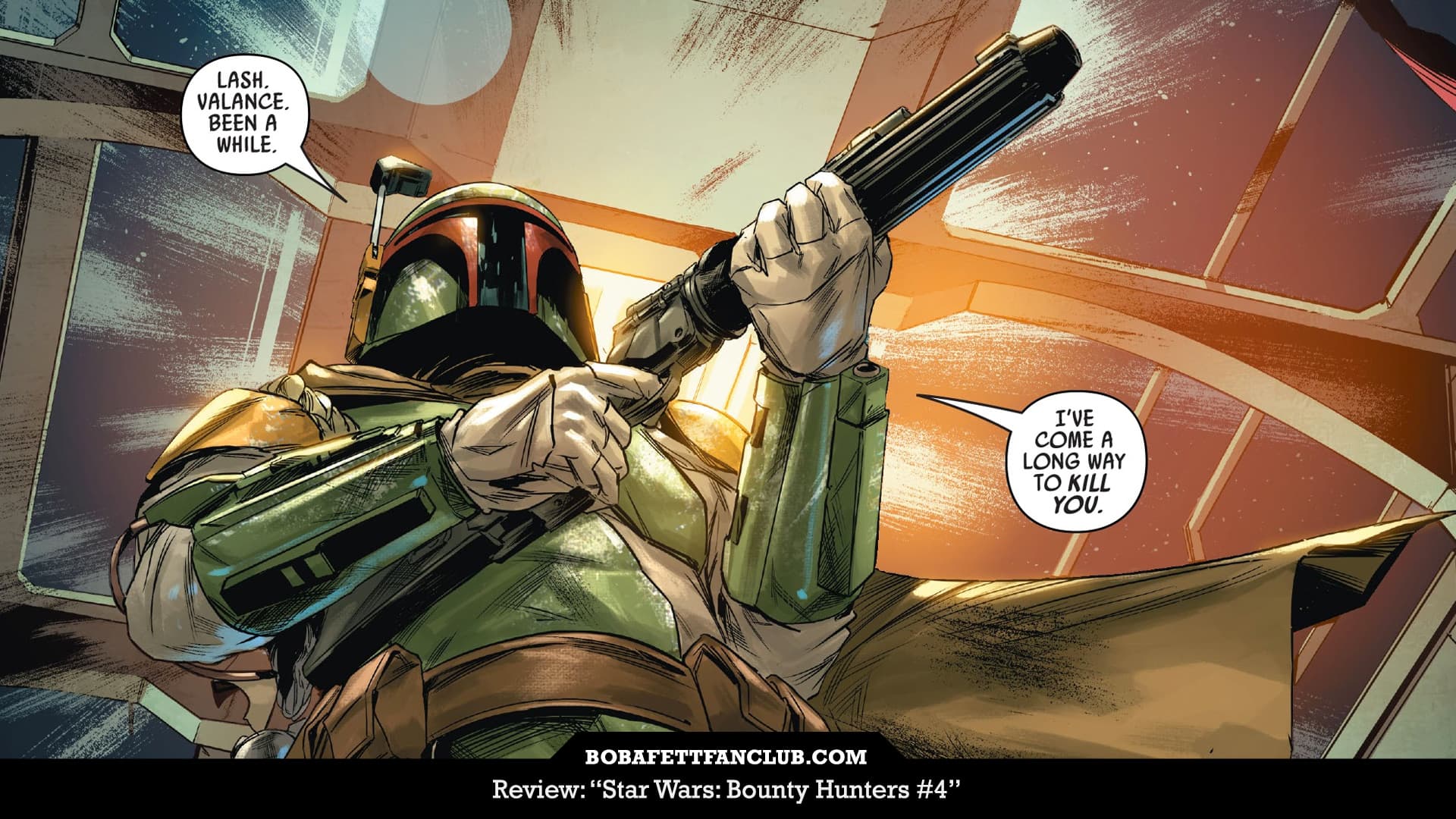 Star Wars: Bounty Hunters #4 picks up right where we last left Valance: cornered by the bounty hunter T’onga aboard his own ship, the Broken Wing. She explains that she wants to avenge her brother T’ongor, who had died as a result of Lash’s actions. Valance reluctantly agrees to help her and she fits him with a restraining bolt. These devices are normally used to subdue droids, but Valance has enough cybernetic parts that it affects him as well. 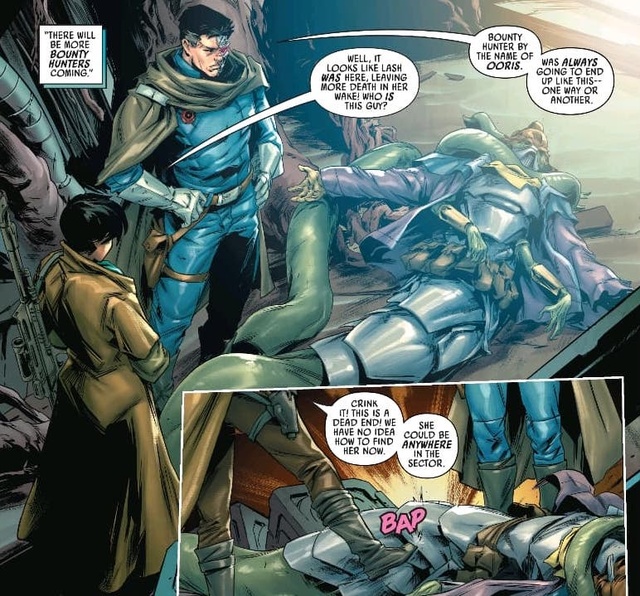 Back on Ruusan, the bounty hunter Ooris is holding the human companion of Nakano Lash, Cadeliah, hostage. He has his serpentine body wrapped tightly around her. Ooris gloats about the situation and slams Lash with his tail. Unbeknownst to him, Cadeliah is able to pull a blade and uses it to stab Ooris in the eye. This is enough of a distraction for Ooris to let her go and for Lash to reach for her weapons. Lash uses a cleaver-like blade to cut Ooris’ hand off and strangles him to death with his own tail, seemingly breaking his neck as well. Thus, Ooris becomes the first bounty hunter casualty in this hunt for Nakano Lash. He seemed mediocre from the beginning and that impression turned out to be correct.

We briefly return to Galmerah, where Bossk has awoken after his defeat at the hands of Valance. Someone unseen interrogates him for the whereabouts of Valance and Lash. I suspect it may be Boba Fett, but their identity is not revealed at this time. 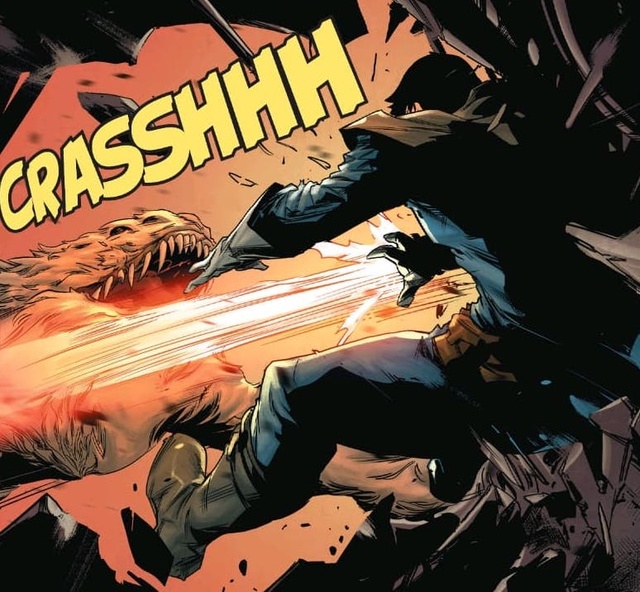 Not long after this, Valance and T’onga reach Ruusan and discover the dead body of Ooris. Cursing it as a dead end, they try to ask the locals for information. Unfortunately for Valance and T’onga, these villagers are clearly loyal to Lash and they don’t cooperate. They open fire on the bounty hunters, and even unleash a Nexu, the lion-like creature from the Geonosis arena in Attack of the Clones. T’onga handles the villagers while Valance is able to subdue the Nexu with his palm blaster after a brief but brutal struggle. An elder who had been told of Valance by Lash reveals where Lash is hiding: there is a lot of rubble in the atmosphere of the plant, wreckage from a space battle during the Clone Wars. Thus, it is a good place to hide a small starship from scanners. 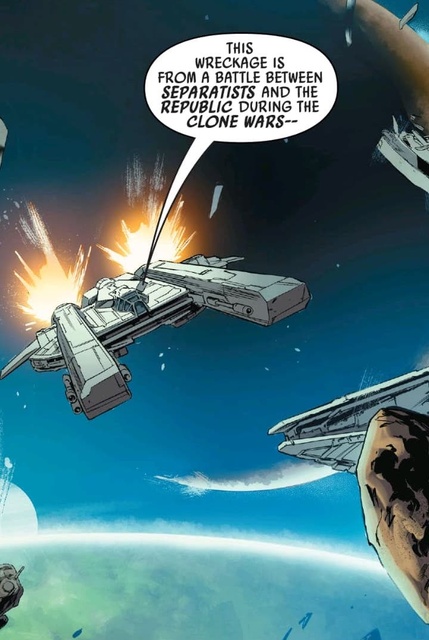 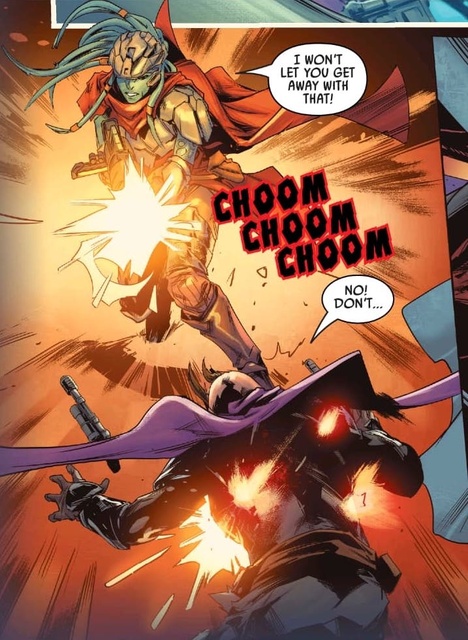 Valance and T’onga locate the ship, and encounter Lash and Cadeliah aboard. T’onga threatens to kill Lash, but Lash asks to explain what really happened with T’ongor and the ruined mission from the flashbacks of this comic series. We are finally able to fully understand what really happened. The team of bounty hunters — Lash, Boba Fett, Bossk, Valance, and T’ongor — had been hired to escort the male heir of the Mourner’s Wail crime syndicate, Khamus, to a location in the territory of the Unbroken Clan, the rival syndicate of Mourner’s Wail. When they reach the site, however, Khamus opens fire on a pregnant woman and her subjects. It turns out that Khamus had a relationship with Krynthia, the daughter of the one true ruler of the Unbroken Clan. Khamus’ father, who was the leader of Mourner’s Wail, would have disowned Khamus if he had found out about this relationship. Thus, Khamus had decided to kill both his lover and unborn child. When Lash saw all this, she turned on Khamus and killed him. As the team tried to escape with Krynthia, T’ongor was shot down by a sniper. This incident sparked a vicious war between the two syndicates, and they’ve been in conflict ever since. A few weeks after this, Krynthia died in childbirth and Lash adopted the child, who is her human companion Cadeliah. Lash had chosen to resurface after so many years because Cadeliah is the rightful heir to both the Mourner’s Wail and the Unbroken Clan. When she comes of age, she would be able to bring peace to their conflict. Also, Lash is dying from a condition called Pheumogray.

After hearing all this, T’onga forgives Lash. She decides to leave all of this conflict behind and return to her wife. However, she is suddenly shot through the torso and killed. The group is cornered aboard the ship by this sudden intruder, who is revealed to be… Boba Fett. 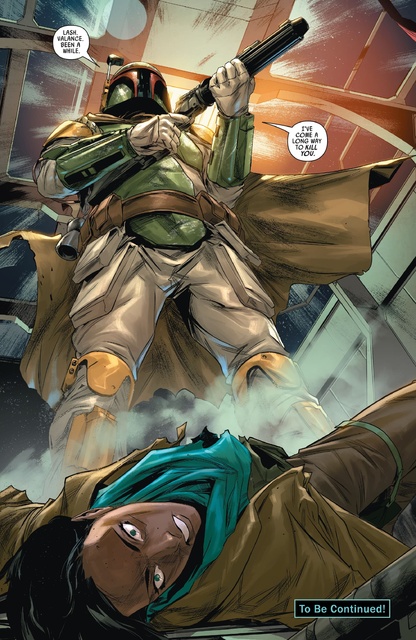 I thought this issue was decent, but a bit short and slow. At the very least, I was pleased to now fully understand the flashback that started this entire conflict. However, I feel that all of this is beneath someone like Boba Fett. The present part of this comic takes places right after The Empire Strikes Back, to the point that Han Solo is still aboard the Slave I frozen in carbonite. I would’ve assumed that delivering him to Jabba the Hutt to claim the second bounty on Solo would be a greater priority than taking revenge on a retired bounty hunter from a botched mission that had occurred years ago. Fett did not lose anyone in that conflict, in contrast to someone like T’onga trying to avenge her brother. So I hope that his involvement in this arc is justified in some way. Or perhaps Fett is so confident in his ability to bring Solo to Jabba that he decides to take on this endeavor at the same time. We already know that he succeeds either way, but it still seems like an odd change of course. I’m certainly not complaining however, Boba Fett has been underused in the new canon. In the Legends multimedia project Shadows of the Empire, other bounty hunters try to take Solo away from Fett. Perhaps we will see this happen in these comics as well.

I also wanted to give another shout out to Beilert Valance. In the previous issue (see review), he took on Bossk one on one and in this one he takes on a Nexu by himself as well. The man is a beast in his own right and puts those cybernetic enhancements to good use. In his original appearance in the Expanded Universe/Legends, Valance had an interesting arc which ended with him sacrificing his life in a duel with Darth Vader in order to save Luke Skywalker. If Valance meets his maker in the official canon as well, I hope he goes out with a bang, because even Trandoshans and Nexus are not enough to stop him. Having once been the secret savior of Luke Skywalker himself, Valance has always been underrated and certainly deserves his moments in the spotlight.