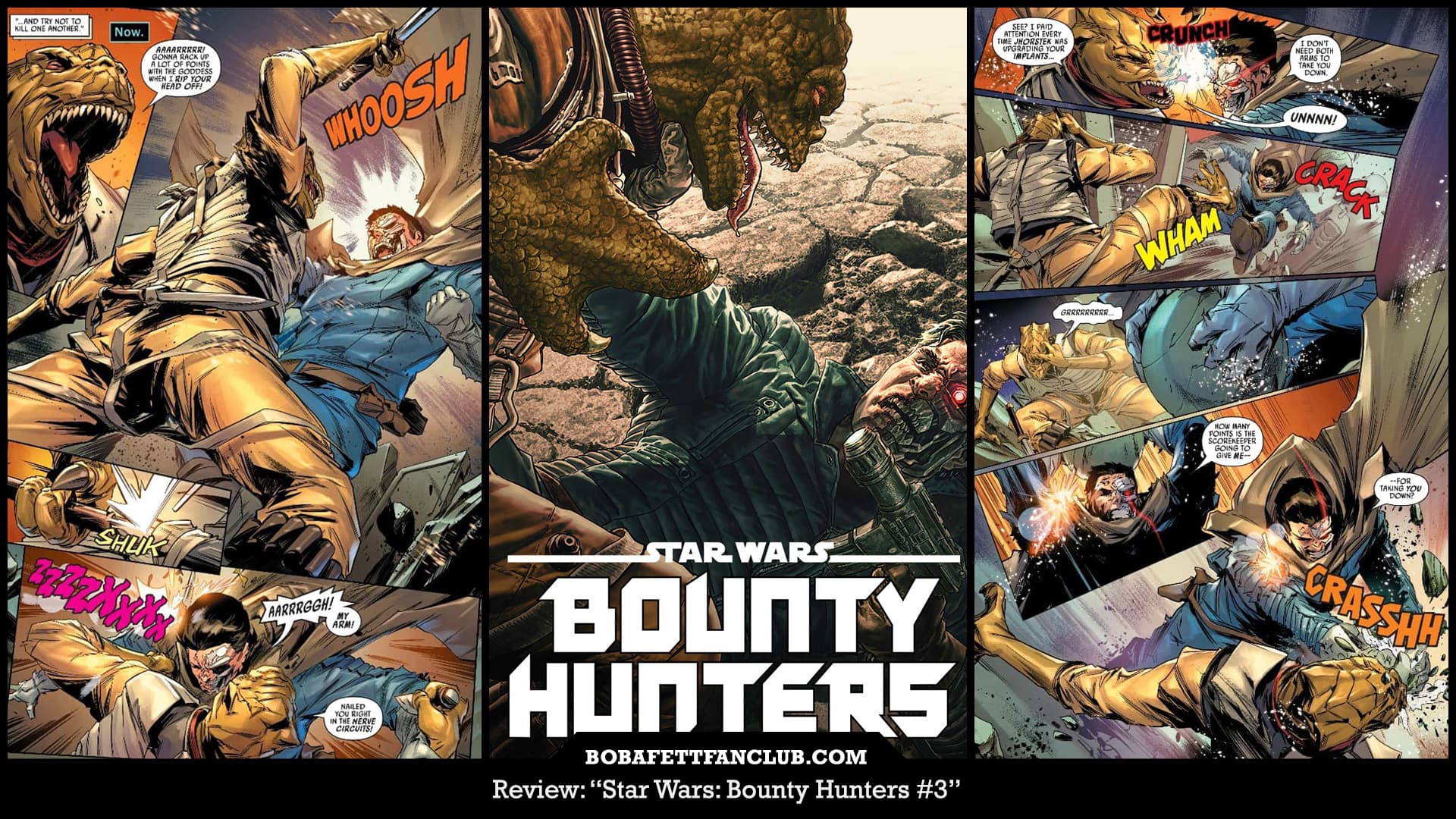 After a significant hiatus due to the COVID-19 pandemic affecting publishing, we now resume our regularly scheduled adventures with Star Wars: Bounty Hunters #3. In the previous issue, we last saw Beilert Valance in a stand-off against Bossk. Both had come to the grave site of Nakano Lash’s parents, in order to find the next clue that would lead them to her location. Also present is the bounty hunter Ooris, who had followed Valance’s ship.

Before their confrontation can begin, it is revealed that Nakano Lash is alive and well on planet Ruusan. Her associate discusses the events of Empire Strikes Back to her: the Rebel defeat on Hoth and the Imperial occupation of Bespin. However, she is only concerned with knowing if anyone has picked up on the messages she left behind; specifically, Beilert Valance.

We are taken back to the showdown between Bossk and Valance, where Bossk has initiated an attack and Valance tries to return fire. It is of interest to note that Bossk has two kukri blades on his back. These are weapons he has not been seen with before in current canon, but I find them to be a good fit for a Trandoshan hunter. Bossk uses the onslaught of his firepower to draw out Valance, and ends up destroying Valance’s blaster. Valance attempts to use his palm blasters, but they fail because they have not been properly repaired. He then leaps and attacks Bossk, who in a spectacular move retaliates by somersaulting over Valance’s head and drawing one of his blades.

As Bossk muses that he should have killed Valance years ago, we are treated to a brief flashback. It takes us back to the events preceding the mission where Nakano Lash turned on her client and put the entire bounty hunter team in danger (This mission was covered in the articles of the past issues of this series.) The team is aboard her ship, the Starskimmer. Valance considers contacting his love interest, Vega, but ends up not doing so. Bossk taunts him for that, and it causes tension between the two of them. Lash interrupts and says she needs one more person on the team. Bossk mentions that he used to work with someone “by the name of Boba Fett.” This mention was very interesting, because Nakano Lash did not recognize Boba Fett’s name. And judging by the context Bossk mentions him, it seems that Boba Fett has yet to reach his unparalleled, galaxy-wide infamy as a bounty hunter. The specific year or era of this flashback has not been specified, but if Boba Fett is still not widely known, it must have been quite some time ago, at least many years before the era of the Galactic Civil War in the original trilogy.

Flashing forward to the present, Bossk and Valance are slugging out in a vicious fight. Bossk draws his second blade and is able to impale Valance in the nerves of one of his arms. However, this is not enough. Valance uses his cybernetic strength to pick up a heavy stone and land a critical blow to Bossk’s head. This puts Bossk down for the count. Valance considers killing him, but decides to spare Bossk and instead handcuffs him while he is unconscious. He then turns to find his droid in order to decipher the clue he found concerning Lash. However, he finds that his droid has been decapitated. Its head was taken by Ooris while Bossk and Valance were fighting. Ooris uses it to discover Lash is on Ruusan.

Lash decides her hiding place is no longer safe, and decides to leave. She goes to retrieve her human companion, but finds her in the grip of Ooris Bynar, who is now the first bounty hunter to find Lash. This is left as a cliffhanger.

The last part of this comic sees Valance return to his ship. Aboard it is T’onga who, as established in the previous issues, is the sister of one of the bounty hunters slain in the aftermath of Lash’s betrayal. Holding her blaster rifle, she asks Valance why she shouldn’t kill him, and this too is left as a cliffhanger.

From the issues released so far, I like this issue better than the previous one, but the first issue is still my favorite. Although I enjoyed this issue, I was not pleased to be left with two cliffhangers after such a long wait for this story arc to continue. However, I understand this was due to circumstances from the pandemic, and the writers are not at fault.

I was very pleased with the Bossk vs. Valance fight. I thought it was appropriately brutal and entertaining. I like both of their characters very much, so I was unsure who I wanted to root for. Conversely, I also did not want a draw of some kind, as this would be anticlimactic. I had no idea who would win between these two, since they are both powerful bounty hunters. Given how narrowly Valance won, I am sure he would’ve lost without the cybernetic enhancements. Nonetheless, both bounty hunters fought well.