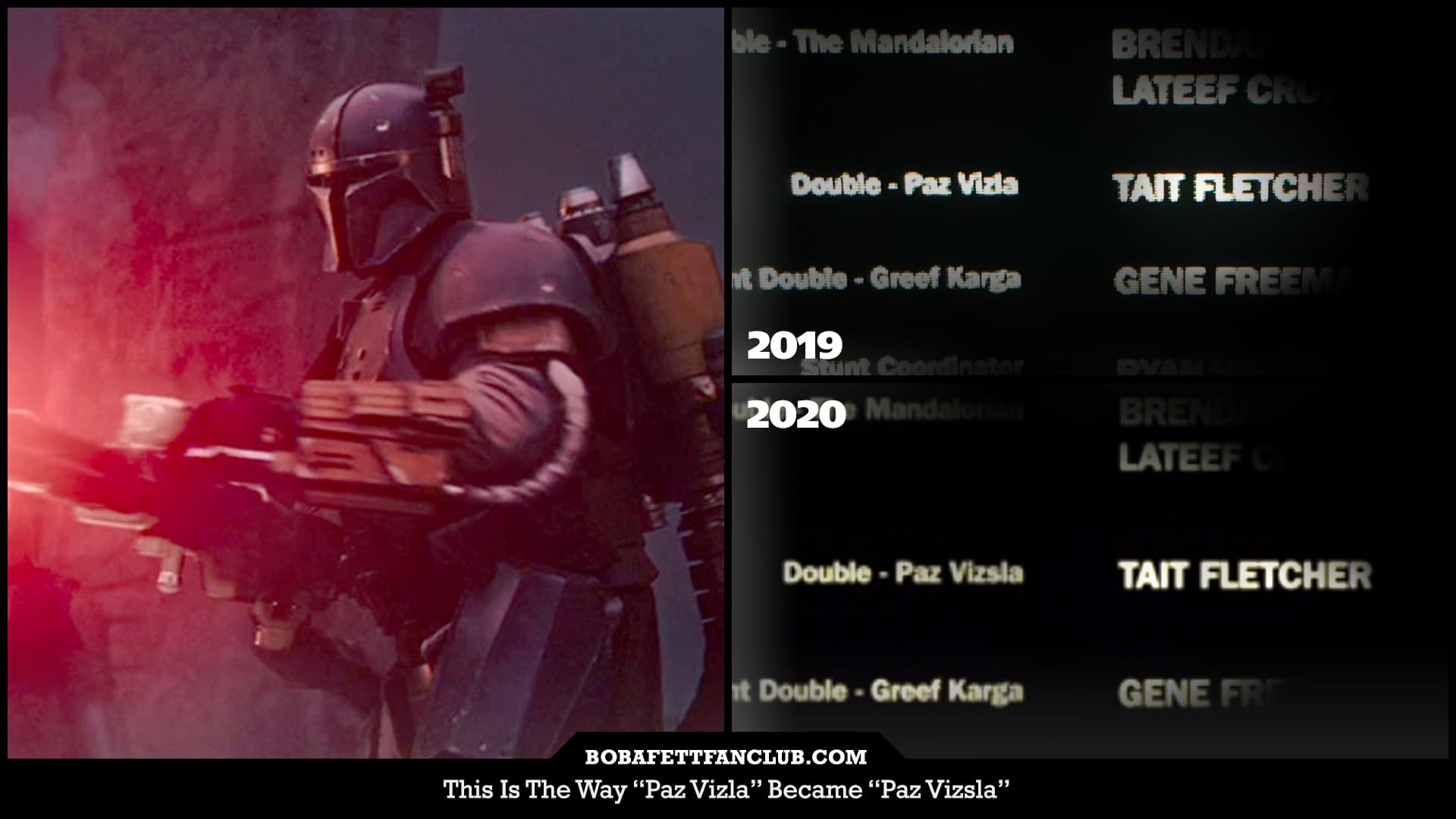 This Is The Way "Paz Vizla" Became "Paz Vizsla"

BFFC spoke with a handful of folks at Lucasfilm and confirmed last week that “Paz Vizsla” is the correct spelling now for the Heavy Infantry Mandalorian, voiced by Jon Favreau and played by Tait Fletcher. The character is especially known for saying “this is the way.”

The original episode in November 2019 had it spelled wrong (“Paz Vizla”) and it was uncorrected for a while… until at least recently.

Wikipedia, IMDb, and even official licensees like Topps Star Wars Authentics have it wrong now.

Here’s what we collectively know and when:

Jon Favreau voiced the character of Pre Vizsla in The Clone Wars animated series. The character was a Mandalorian and member of Death Watch.

Chapter 3 of “The Mandalorian” (Season 1) premiered on November 22, 2019. At the end of the show, Tait Fletcher is credited as the double for “Paz Vizla.” Jon Favreau is not credited for the voice, but it’s very clearly him. Here’s a tweet we authored after the show aired:

Great job by @Jon_Favreau who voiced Paz Vizla in episode 3 of #TheMandalorian pic.twitter.com/arf4weO1Hv

On the same day, Vanity Fair ran an episode recap with the following commentary:

[T]he credits reveal that this new character is named Paz Vizla—a slightly different spelling of the last name (perhaps a mistake?) but too close to be coincidence. This has to be someone from the House of Vizsla, and a nod toward Favreau’s earlier character.

TLDR: “Vizla” ended up being a mistake. “Vizsla” is how the end credits appear now on the Disney+ stream; they’ve been retroactively corrected.

In honor of @TaitFletcher's birthday, a question for @dan_brooks, @PhilSzostak, and the great folks at Lucasfilm. Thought "Paz Vizla" was the more common spelling but pulling up the Disney+ stream right now, it says "Paz Vizsla" in Ep. 3 of #TheMandalorian. This is a typo, right? pic.twitter.com/UtOT5bBcxM

For comparison, here’s a tweet by James Weible showing the original credits and wondering the same thing:

@Jon_Favreau is paz vizla the same person as the heavy infantry mando, did you voice him, and is he a descendant of pre viszla?

P.S. is the lack of 's' in vizla a typo, or is that the correct spelling? pic.twitter.com/akuYCcVyhk

So for all this time, we’ve been correcting fans: no, this is a different spelling. Well, now the source material has changed.

To circle back to our confirmation with Lucasfilm, here’s a reply we got from Lucasfilm Story Group member Matt Martin, who we’ve known for years like even saying hello at Star Wars Celebrations and even Galaxy’s Edge one time:

I doubt they switched it on accident, right?

We also heard back from Lucasfilm’s Phil Szostak:

If I were to venture a guess, the intention was for Paz Vizsla to be in Clan Vizsla, since both Paz and Pre Vizsla were voiced by Jon Favreau. But the initial Mandalorian Chapter 3 credits misspelled the name to "Vizla". That's since been corrected.

There you have it. This is the way it is now spelled.