I wasn’t going to buy GameStop’s Gentle Giant Boba Fett Mini Bust Statue at first. Mostly because it was ROTJ. But I hadn’t gotten anything from Gentle Giant lately, and my local store had it in stock so I didn’t have to pay shipping so I grabbed it anyway.

The box is consistent with all of GG’s offerings, with the added “GameStop Exclusive” badge on the front. Inside is the usual Styrofoam packing and a trading card COA with the number, edition size, and on the back the same image as the front of the box minus the GameStop Exclusive badge.

The first thing I noticed when unpacking is that the Wookiee scalps aren’t very well executed. I’ll come back to that. The other interesting bit is that the rangefinder comes unattached to the helmet. It just slides into a slot on top of the helmet’s side piece (technical term?) and gravity holds it there. This is actually a great method of preventing them from getting bent, which is probably my single largest gripe with any of my Boba pieces. The only downside is that keeps it from being hinged for anyone who might want to display it in the down position. I’m 99% sure I’ve never displayed any of my Fett’s with the rangefinder down, other than to briefly show someone it moves, so this isn’t an issue for me. I don’t think I got mine in all the way because it looks longer than on the actual piece than on the box, but I packed it back up already as I don’t have room on the shelf at the moment.

For the most part the piece is very well done. The paint job looks great. That’s not intended to be a comment on screen accuracy, I’m sure the guys at TDH will pick that apart as necessary. The base looks good too, and the Mythosaur skulls are a very nice touch. The only negative to it (mine anyway) are the Wookiee scalps. They’re frayed on the braids, the braids don’t appear to be very well done, and it doesn’t look very well glued on. You can see one spot in front of the shoulder/arm where there’s glue on the piece but the scalps didn’t adhere.

Overall best I can say is I’m not unhappy with this piece. It wasn’t something I was eagerly anticipating to begin with so I’m not really let down by the scalps. But it definitely takes away from my appreciation of the piece. I’d say $80 is about right for the price if you can pick it up locally. Another $10 or so (for S&H) and I would have skipped it. I’m very curious to know how the scalps have come out on other pieces. 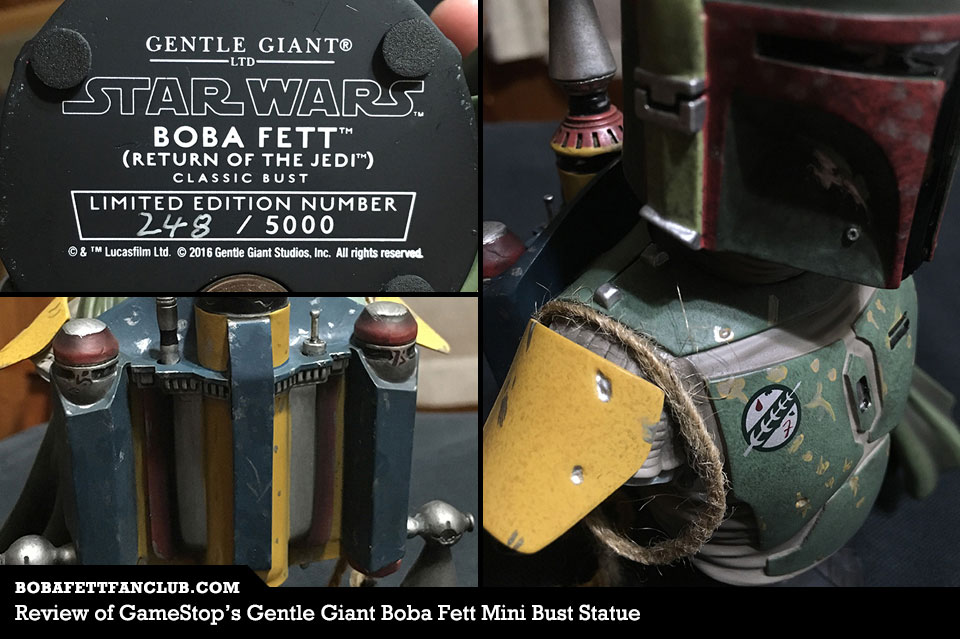