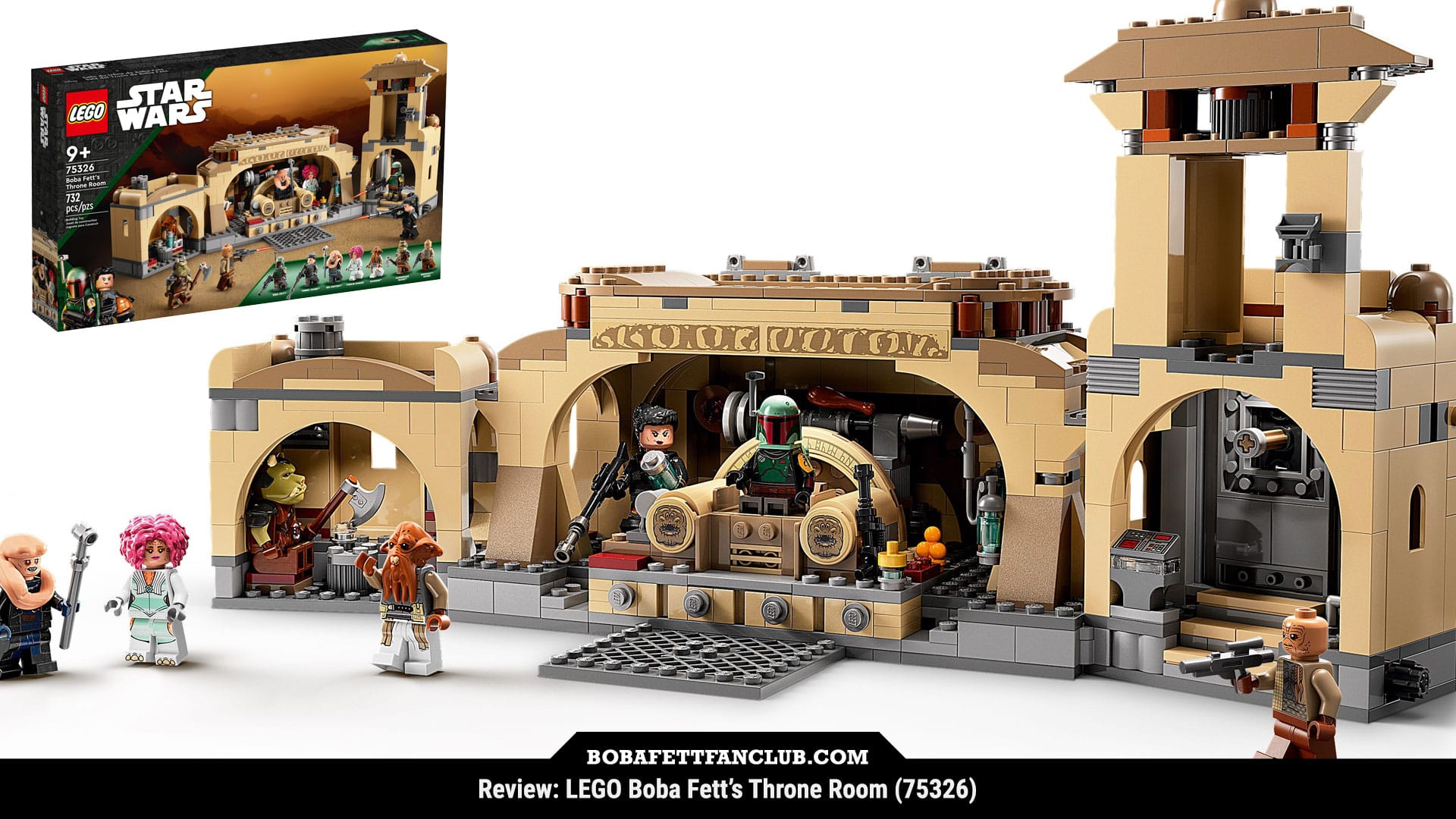 Boba Fett’s Throne Room by LEGO is a great way to continue the adventures of Boba Fett and Fennec Shand. A revision and expansion of LEGO Jabba’s Palace (9516) from 2012, Boba Fett’s version has been updated to reflect both the changes in the former’s palace, as well as use of newer pieces, colors, and techniques from LEGO all while maintaining a familiar design aesthetic. Boba Fett’s Throne Room retails from LEGO at $99.99, however it is currently listed at $79.99 on Zavvi.com. Zavvi provided the set for this review. 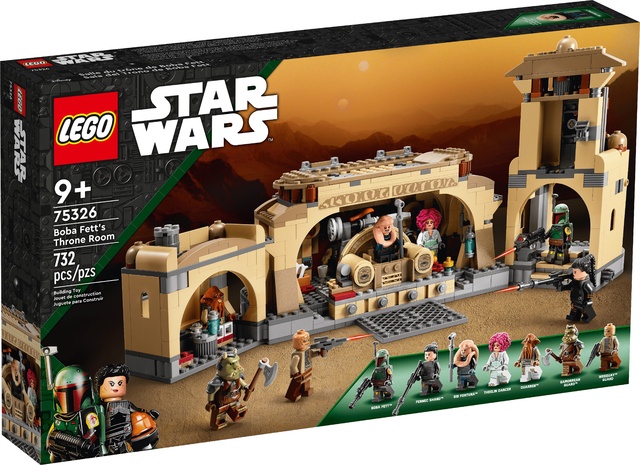 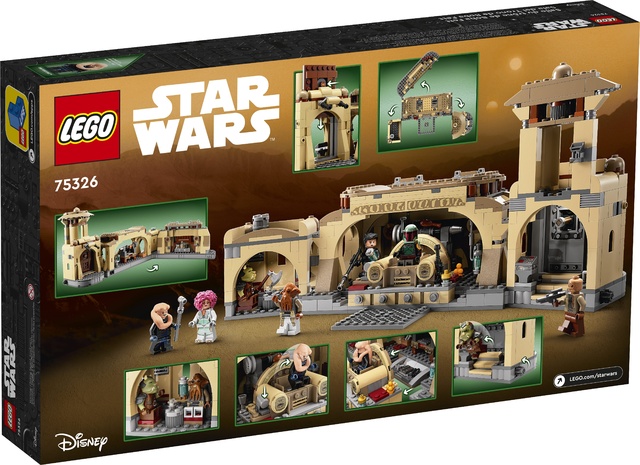 The main gate with telescoping ball droid returns, still functional in that the droid can be extended and retracted, and the gate can be raised and lowered. If you make it past the gate, you best be careful though because the stairs into the throne room are rigged to knock you off your feet! Above the entrance we find an observation tower and platform, most likely meant to replicate the terrace from which Boba and Fennec look out over Tatooine. Luckily there is a pair of macrobinoculars handy to help keep a lookout. 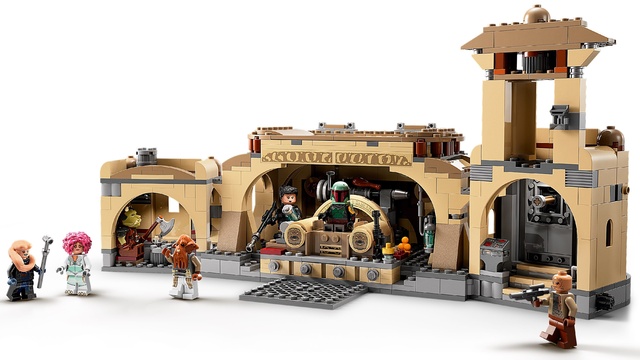 Moving into the throne room itself we find Jabba’s dais gone, replaced with a large throne on which the current occupant may sit and hold court. Be careful though because similar to the entrance stairs the throne is rigged to throw you off! The rancor pit is still represented by a grate on the floor in front of the throne. Both the throne and the grate slide forward out of the playset to reveal blasters and other treasure hidden beneath it. Behind the throne we find a rotating spit roasting some meat, and a bar with plenty of spotchka. There’s even a crate to drop your bones in after eating. The back half of the throne room hinges open for better minifigure access to the food and drink. 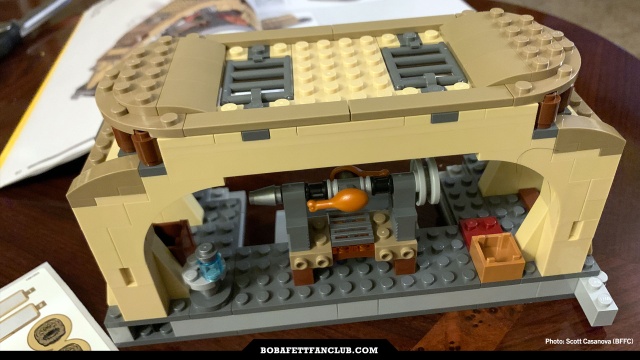 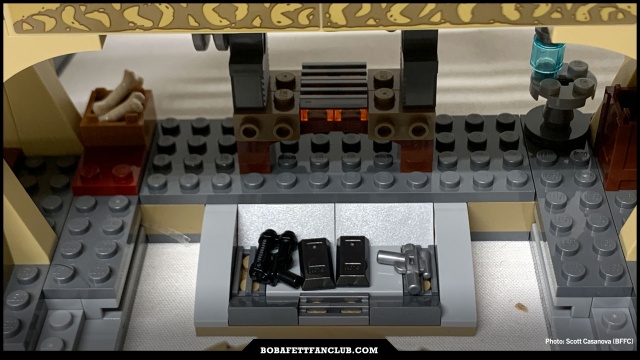 Past the throne room is a small nook with a table and chairs to allow some of the shadier characters a private space to solidify some private arrangements. If things get dicey though, watch out of the storage barrel on the roof hiding some thermal detonators. 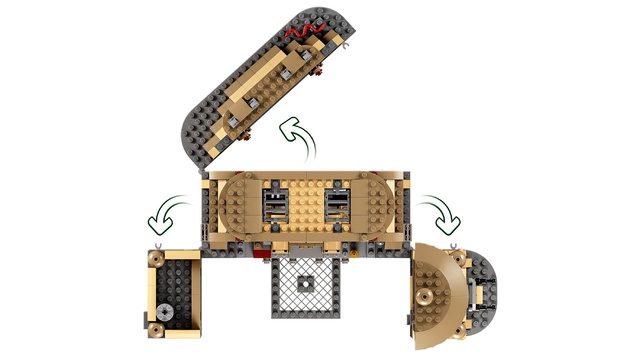 Both the gate/tower building and the meeting nook are hinged to the main throne room to allow you to open them wide for better viewing or spin them closer to create a more accurate representation of the palace layout. 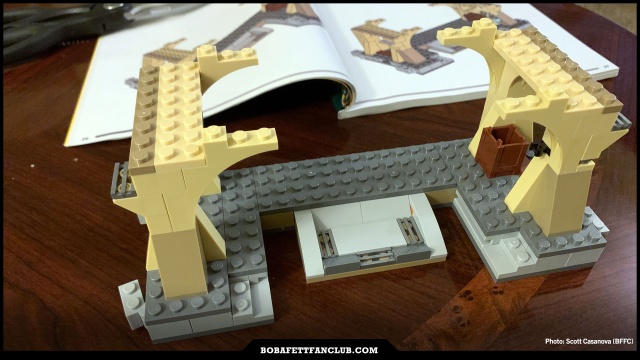 Assembly is easy — 732 pieces took me about 2 hours with distractions. The set is laid out into 6 major components and the instructions are easy to follow. It also includes 7 minifigures, some of which seem curious to have been included whereas other may have made more sense. 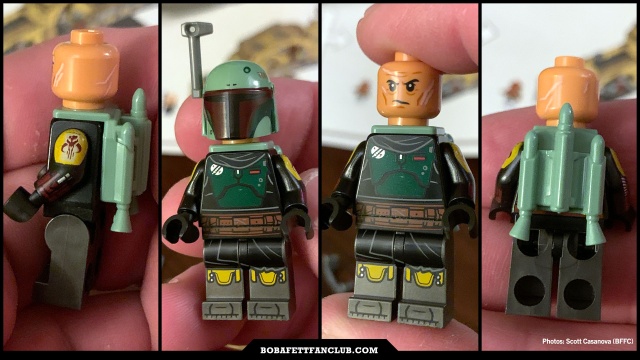 Boba Fett has been mostly repainted to match his “Book of Boba Fett” stylings, including the head to represent the Sarlacc scaring. The included helmet is the wrong green for BOBF, however with other OT Fett LEGO offerings currently on the market it’s not surprising. My only real disappointment in this set is they’re still using the Jango arena style jetpack for Boba. The OG Boba mini-figures had a much more accurately shaped jet-pack for his ESB/ROTJ looks but ever since AOTC and now with Din and other Mandos having a very similar design LEGO seems content to keep recycling the Jango arena jet-pack. 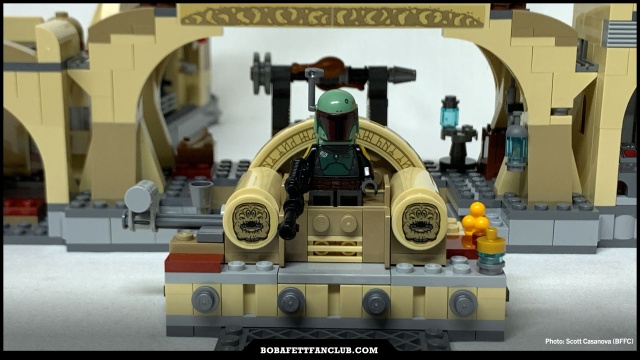 The Theelin, weequay and quarren are interesting choices to include. LEGO already has other Twi-lek sculpts to possibly include the Majordomo or Garsa Fwip, Wookie sculpts to include Black Krrsantan, or even Trandoshan or Ithorian sculpts as well. And other than recreating his death, calling it Boba Fett’s throne room and including Bib Fortuna seems a bit of an odd choice. I would say that’s my only other criticism of this set in that LEGO could have included alternate characters to make it more relevant to “The Book of Boba Fett.”

Despite my criticisms, this isn’t an Ultimate Collectors Set, it’s for the kids and for fun. I love the design. It does a great job of recreating the aesthetic of the filming sets used both in ROTJ and TBOBF. And overall, it’s a fun build, an easy build, and it incorporates a lot of features and accessories to keep the little Daimyo in your family entertained.

LEGO Boba Fett's Throne Room (75326)
2022
Review disclosure
BFFC was provided with a free product in return for an honest review. All thoughts and opinions expressed herein are those of the author and not influenced by the manufacturer and/or its affiliates in any way.
Affiliate marketing disclosure
When you make a purchase through clicking on a vendor link at BFFC, we may receive a small commission. We hand pick links for official merchandise to vendors with great reputations with their costs, shipping, and customer service. We are independently run and make our own decisions — nobody tells us what to do. Best of all, there is no extra cost to you. All proceeds go towards our costs to be online. Thanks for your support!
Enjoy this post? Consider sharing it on Facebook and Twitter or adding a comment below.
You can easily share this page with this short URL: