At a time when Disney appears to be ignoring the prequels, Gentle Giant bucks that trend by releasing Jango Fett as their latest offering in their Classic Bust line. If you’re a Jango Fett fan, or even a Fett fan in general, there is so much to love about this bust. The attention to detail and the design decisions (save one seemingly large oversight) can put this squarely in the “must buy” column for collectors.

The one-sixth scale bust is starting to ship now from their warehouse now. It retails for $80.

Once again, the packaging is consistent in style and design with all Gentle Giant’s other offerings. One thing that does appear to be new here is a sticker on the styrofoam inserts indicating the piece number and over all run. As with other releases this is noted via a sticker on the bottom of the box and handwritten/printed again on the COA card as well as the piece itself. My guess is that now labeling the styrofoam ensures a matched set.

At 1,500 pieces, Jango seems to be a smaller than usual run for the classic busts, although my only firsthand comparison is the Boba Fett (GameStop Exclusive) which was 5,000. An odd curiosity about the packaging, specifically about the character description on the back: it refers to Jango as using a "sleek armored suit that concealed his scarred face." Ok, yeah, they gave Tem some make-up but it’s not like he was horribly disfigured or grotesque and needing to hide it. Also, no mention of him or his armor being Mandalorian at all. What’s up with that?

The first thing I look for on a new Jango piece is which jetpack was chosen. Personally, I prefer the "Boba" style jetpack over the "Arena" style, but GG’s decision to go "Arena" helps set this apart from their Boba and pacify the repaint critics. The next thing I look for is the helmet’s neck seal. More specifically, is there one? None of the screen-used Boba buckets had neck seals. The actors wore what is essentially a balaclava covering their necks, chins, and head. While the Jango costume features a similar neck piece for the actor, the costume designers took the extra step of adding what appears to be a foam doughnut that attaches to the bottom rim of the helmet and fills that space from the helmet to Jango’s neck. If you ever catch these costumes on display, you can check that out. GG nailed this detail in adding it to the bust.

Another difference from their Boba is the rangefinder. Jango’s is permanently attached, and while it looks like it might have the freedom to be rotated to the down position it’s permanently up. I never lower mine anyway but I know some collectors do. The packaging prevents this from getting bent so probably a better production choice than Boba’s whose is removable (or losable).

One oversight to note. All the Classic Busts feature the insignia of the character’s allegiance. Since Boba doesn’t really have one, they used the Mythosaur, an insignia featured on his armor. Otherwise the Rebels have the Rebel Alliance insignia and the Imperials have the Galactic Empire insignia. Sequel trilogy characters feature the First Order or Resistance insignias. Jango features an exceptionally detailed Galactic Empire insignia.

Unfortunately, Jango dies approximately 3 years before the Galactic Empire even comes into existence. Like Boba, Jango is basically a freelancer except his armor doesn’t have any insignia to pull from. My best guess is that it should be the Republic insignia since he is the clone template, even though he’s actually working for the Sith/Separatists in doing so.

In all fairness the canon Republic insignia does very closely resemble that of the Galactic Empire. The Republic one has 6 spokes and the Empire one has 8. As best as I can tell, Jango is the first prequel era character to be produced in the Classic Bust line. However, given the attention to detail that is exhibited in not only recreating the costume but also in carving the very intricate insignia into the base it does leave me slightly disappointed that their research missed the difference in insignias.

If the mismatched insignia doesn’t bother you -- or your love for Jango, or Fetts, or prequels outweighs that -- then this belongs in your display. It’s a great piece and a very faithful reproduction of the armor. And if you’re fortunate enough to have the Boba, they look amazing together.

Photos by Scott Casanova for BFFC. 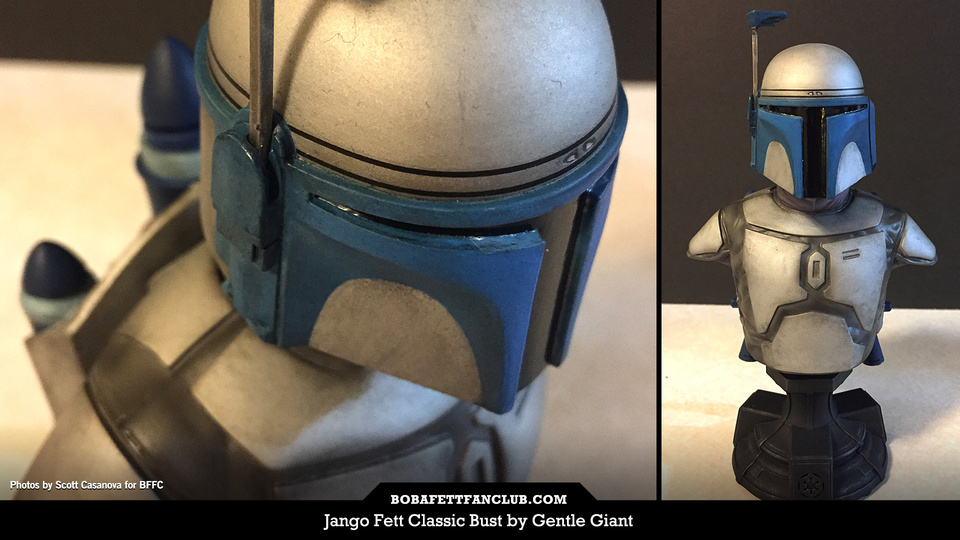