As of September 29, 2010, the first canon appearance of the face of Boba Fett was published in Dark Horse’s “The Force Unleashed Vol. 2” trade paperback. The comic coincides with the storyline of the upcoming “The Force Unleashed II” video game, but does not follow it. The writer of the game and previous comic, Hayden Blackman, is a Fett-fan favorite after writing the “Jango Fett: Open Seasons” comics back in 2003.

Though we had previously seen Fett’s face in print in both Star Wars Insider issue #80 in “The History of the Mandalorians” article (later retconned to be an image of Spar)  and a non-canon appearance in the “Empire Strikes Back Infinities” TPB. In both cases, obviously, Boba bears a striking resemblance to his father, Jango.

In this comic, Boba  and a female bounty hunter named Xasha are seen in very casual attire, discussing their current financial states, before being contacted by Darth Vader with a job. The two set off immediately for Cato Neimoidia in search for the clone of Galen Marek. 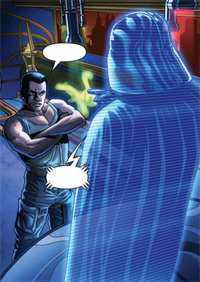 Not only does Boba’s involvement in the storyline bolster the Starkiller franchise with more of a “cult” following, but it also throws a wrench, yet again, in the Fett psyche. In the canon storylines, this would be several years after Boba’s leaving Sintas Vel, and according to various previous texts, he had not been involved with any other women since Sintas. Leave it to Star Wars to mess up an existing storyline to make a buck. Join this discussion on our forums.

Regardless, the art looks terrific, and this comic coupled with Tom Taylor’s “Blood Ties: A Tale of Jango And Boba Fett“, fans are getting more reading material that has been absent for some time.