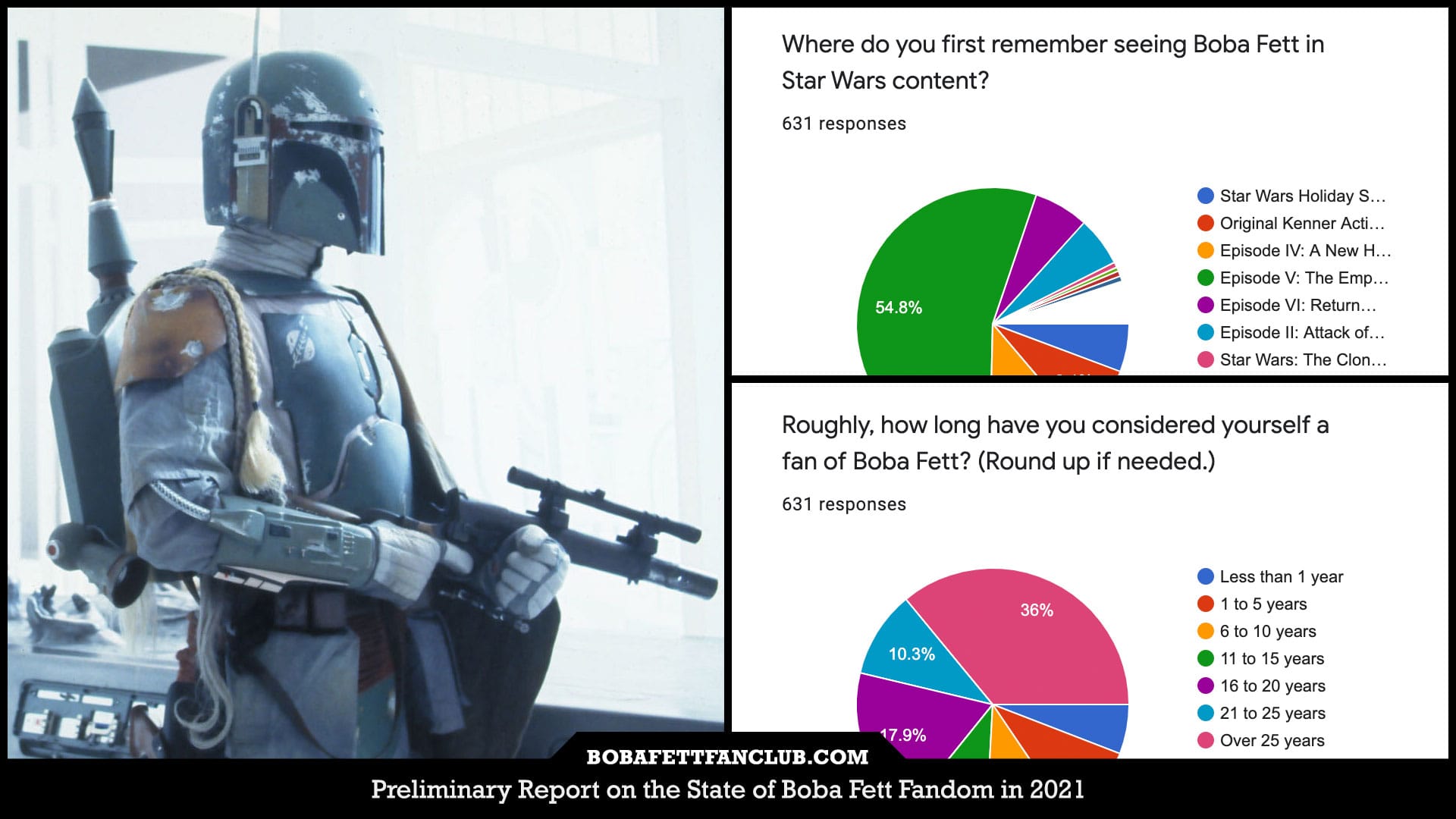 Preliminary Report on the State of Boba Fett Fandom in 2021

Earlier this year, we launched our “State of Boba Fett Fandom” survey to better understand the Boba Fett Fan Club’s audience as well as the broader community of Fett fans. Since we started collecting responses in April, we’ve heard from over 600 of our followers and fans! We’ve been digging into the data and are finally excited to share with you what we’ve learned about the general Fett fandom. What follows is a preliminary dive into a general overview of the Fett fandom who participated in our survey. 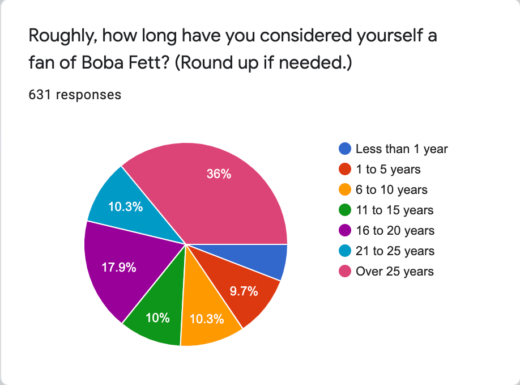 36% of those who responded have been fans of Fett for over 25 years. BFFC recently celebrated its own 25th anniversary, which is quite a rare milestone for a Star Wars website. It would seem that a significant portion of the Fett fan base have been fans just as long as we have! Indeed, 74.4% of survey respondents have been Fett fans for 11 or more years. We’ve known that Fett’s been a cult favorite for decades, but seeing these numbers really hit home the longevity of interest in Fett’s character (and for that matter, Star Wars). 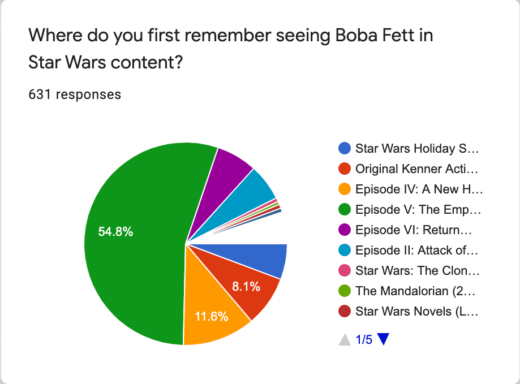 Most — almost 55% — first remember seeing Boba Fett in Star Wars Episode V: The Empire Strikes Back (1980 or 1997 Special Edition release). Given that this is also the first canonical appearance of the bounty hunter in Star Wars media, this isn’t super surprising, but it also demonstrates the strong impression a side character like Boba can have on viewers. The second most-common memory of first seeing Fett is in Episode VI: A New Hope Special Edition (1997 release). Still, a little over 8% of our respondents remember first seeing Boba Fett in the form of the Original Kenner Action Figure (released 1979 – a year before his film debut!). It goes to show how a cool toy promotion can help elevate the appeal of an interesting character, albeit one with a small amount of actual film screen time.

We asked fans all to let us know what it was about Boba Fett that was initially appealing to them (by selecting top three choices from a list of suggested reasons). Overwhelmingly, 85% of respondents were initially drawn to his appearance (i.e., the armor), followed by his character (e.g., how he acts towards other characters and responds to his situations) at 46.3%. Not far behind on these reasons to be initially drawn to Fett are his gadgets (like Slave I and his jetpack) at 35.9% and his history and lore (such as his relation to Jango Fett and the Mandalorians) at 28.8%. Given the amount of significance placed on his physical appearance in making his character intriguing and appealing, it would seem that the iconic T-shaped visor and Mandalorian armor make quite an impression on fans!

When looking at responses to a question about particular moments or content that strongly resonated and turned people into fans, moments from The Empire Strikes Back are prevalent. Fans enjoy how he outsmarted Han and appears suddenly from behind Darth Vader on Cloud City in the dining hall. And, they appreciate his mysterious introduction on the Star Destroyer’s bridge along with Vader’s quip, “No disintegrations.” Fans describe him as having an appearance that is different and unique from everyone else in Empire, which lingered in the minds and imaginations of many respondents as young children. Fans also appreciate that, as a bounty hunter, he didn’t fit neatly into the “good” or “bad” alignment as so many of other film’s characters do.

Outside of the films, fans recall being pulled into Fett’s story through comics and books, like the now-Legends The Mandalorian Armor and The Legacy of the Force: Bloodlines. His backstory and relationship to Jango and the clone army as explored in Episode II: Attack of the Clones was also a catalyst for many fans to learn more about him and grow attached. 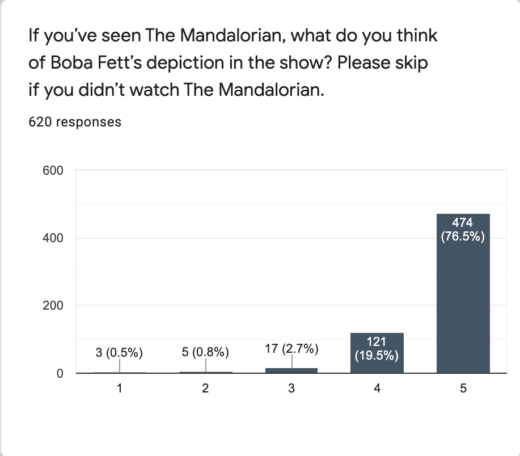 When it comes to the modern depiction of Boba Fett on The Mandalorian, most fans who took our survey felt his portrayal on the show is excellent (76.8%) while a minority felt Fett’s portrayal is poor (0.5%). With most fans holding positive sentiment of how Boba Fett is portrayed in The Mandalorian, it would seem the show has likely only solidified or intensified fan opinion of Fett, at the same time earning him some new ones.

We also asked fans to tell us about the creative activities they engage in that tie into their love of Fett. The most popular creative activity taken up by Fett fans as an expression of their fandom is making a Boba Fett related art piece of craft (44.8%). Nearly 25% have created a Boba Fett cosplay or costume.

When it comes to simply dropping some credits on Fett-related goods, a significant number of fans have purchased a Boba Fett action figure (87.2%), clothing or accessories (79.4%), or a book/comic featuring Fett (71.8%). As for engaging in fan content, over 58% have watched a fan film starring Fett, 43.2% have purchased unofficial Fett artwork, and just over 40% have read Boba Fett fan fiction. 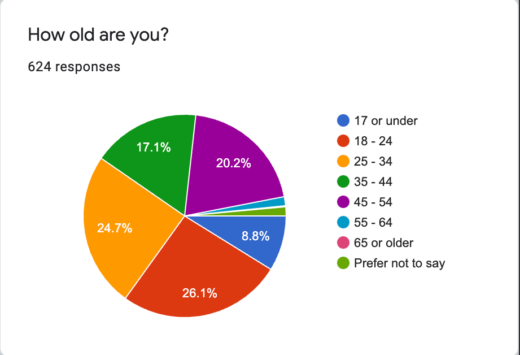 With “The Book of Boba Fett” being approximately 3 months out, it’s a good time to be a fan. And for those of us who have been fans for over a decade, or in many cases — over 25 years — it would seem that Fett getting his own show might be taking us into the new golden age of Fett content and fandom. It will be exciting to see how the show encourages more viewers to become fans, partake in activities like speculating about the show, producing fan art, and writing new fan theories and stories. As we’ve been along for the ride for 25 years, BFFC will continue to be here right with you all, through every exciting step and reveal.