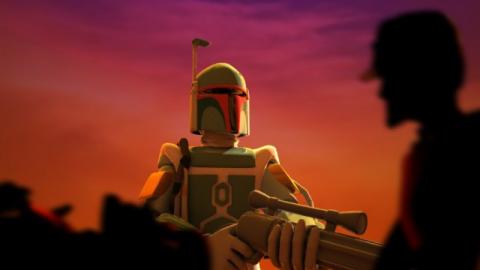 Adam Brandish [site no longer online], a young 3D artist who worked on Boba Fett in the “Tales of the New Republic” fan film trailer, wrote a “making of” the construction of an animated bounty hunter for his two CG shots. One is a the medium shot of Boba Fett on Cloud City where Han Solo in carbonite is brought aboard Slave I; the other a close-up of a post-Jedi Fett landing outside the Pit, gun drawn. The “making of” explains from the artist’s perspective the shots’ construction and difficulties.

Much like the case in filming Empire, where shots aboard Slave I hit the cutting room floor, a shot in the trailer — a wide shot of Fett flying out of the Sarlacc — was dropped for the sake of timing, as is the case with most edits, since the cuts need to keep moving the abbreviated storyline along. The document, at the official site for the fan film, also includes the layers used to composite the Cloud City shots as well as an un-rendered screenshot from inside the Sarlacc.

The final project is available on YouTube as well as multiple formats on the official fan film site [site no longer online].

Adam also includes a moment of Boba Fett in his showreel.

“Tales of the New Republic” is one of many fan films that feature Boba Fett. See a full listing of films.