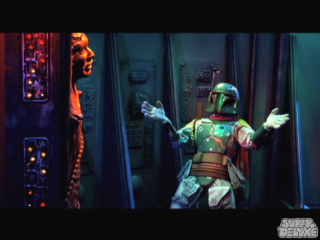 The much-hyped special, directed by self-proclaimed Boba Fett fan Seth Green, has some fun with Fett and Solo in the 30-minute television special, which aired tonight on Cartoon Network. The one-minute scene is what the LA Weekly [UPDATE: link no longer available] calls “Boba Fett in an unveiled moment alone with a frozen Han Solo.”

As of 10 pm PST, you can see the entire episode on Superdeluxe [UPDATE: link no longer available], actually courtesy of Robot Chicken, even before its scheduled airtime. Boba Fett’s scene begins 15 minutes into the episode. Fans have already been commenting on our message boards.

“Green observes as Josh Jennings animates a scene in which Boba Fett transports a carbonite-encased Han to Jabba’s palace.” (Photo and caption via WizardWorld.com)

In March 2006, Seth Green told StarWars.com [UPDATE: link no longer available] that “the original Boba Fett that I got as a kid is still my favorite (action figure). … I always had a fascination with Boba Fett because he’s such an intriguing character. One of these days I want to have a chat with Jeremy Bulloch and ask him about how his small five-line role as been turned into a lifestyle.”

Boba Fett had a cameo in the film Can’t Hardly Wait, which features Seth Green in a lead role.

Zuckuss, one of the bounty hunters on deck with Boba Fett in The Empire Strikes Back, has a scene in Robot Chicken: Star Wars, with voice talent provided by comedian Conan O’Brien.

As we saw in the trailer, Boba Fett is in Slave I with Han Solo in Carbonite. “Hey, Mr. Solo. Solo on the rocks. You can’t beat me, I’m Boba Fett. I’m the greatest bounty hunter ever.”

He draws his gun, “Oh, don-don-don’t. Hah, yeah! What’s that Solo? Ol’ blasters aren’t fair? OK, dig it. No blasters.” He holsters, but then, “oh, ahh, didn’t see that one coming, did ‘ya? So slow. Thought I was over there, but guess what!” He dives head-first in a roll across the room. He pops up in front of Solo, “Oh, oh, over here.”

He’s out of breath and thinks Solo’s talking to him. “Huh? What’s that? What, you want a little face-to-face? Well, let me just take this bad boy off.”

He pops his helmet off. (Yup, unmasked and aged for mid-Empire.) “Oh, he’s even better looking without the helmet.”

Fett smiles, “Surprise ending. Eh, oh, you want me to come closer? Oh, you don’t want to fight anymore?” He moves closer to Han and says, “Oh, your hands are up there almost like you’re beggin’. Beggin’ for a little piece of Boba.”

Boba places his hands on Han’s, “Yeah, you like that, don’t you?” Then he starts stoking Han’s face and lips and it ends with Boba saying, “You like it cause you’re bad. Oh yeah, you dirty little smuggler.”

Special thanks to BFFC member Manji_Ninja for contributing to this story.