Last year, Jeremy Bulloch attended a Sci Fi Expo in Dallas Texas. During this event, Alex Alva (aka SpideyFett) had an opportunity to speak with the original Boba Fett. Jeremy had told Alex about how amazed he was at the Fett costumes that The Dented Helmet had at the expo and it reminded him of the suit he wore during filming.

Later Alex learned that Jeremy actually wanted a full Fett suit for himself and had been wanting one for some time. And so, the “Jeremy Bulloch Project” began. The joint powers of memebers from The Dented Helmet and Rebelscum worked on the project for 6 months. The final costume was presented to Jeremy on April 5, 2008 at the Dallas Comic Con.

Pictures of the event and a link to the original story at Ricks Family Website Blog.

The Dallas Morning News wrote up a post, which includes a picture. “‘To get this suit is a highlight,’ Mr. Bulloch said. ‘We never got to keep our costumes after filming. I now have one to wear to events.’ The British actor flew in especially for the Boba Fett fete.”

According the project coordinator, here’s the makers list on The Dented Helmet of who contributed what to the “Jeremy Bulloch Project.” (We’ve updated it for clarity and some minor typos.)

Portrait of Jeremy Bulloch in his ESB suit, painted by Obi-Dan 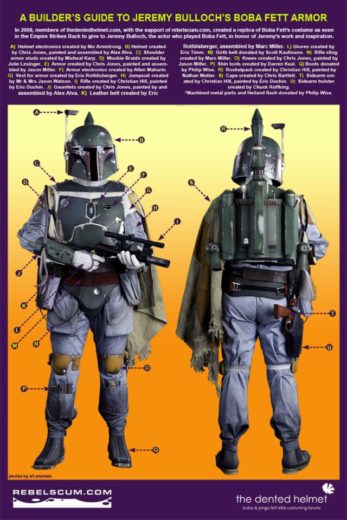