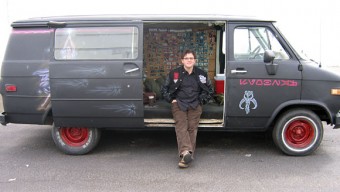 As many Star Wars fans may know by now, Fanboys is an upcoming film giving homage to the Star Wars fan base. The film, once only a simple script that Harry Knowles had been promoting on his movie site Aint It Cool News, now has The Weinstein Company financing the film.

The story is set in 1998 and centers on a road trip by a group of friends who literally can’t wait until Star Wars: Episode I – The Phantom Menace hits theaters. They head to George Lucas’ Skywalker Ranch intent on sneaking a peek at a rough cut. They can’t wait because one of the friends is dying of cancer and may not live to see the release of Episode I. Their road trip is like a geeky, illegal version of the Make-a-Wish Foundation.

That version of the film, however, has been changed. The studio thought that the film wouldn’t be much of a comedy with cancer being mentioned.

“Have you seen the cancer version of this movie?” writes Steven Brill, the director of Little Nicky and Drillbit Taylor, in an email to an angry fan. “I have. It is unreleaseable. It would be irresponsible to release it.” Brill was brought in to re-shoot the film and erase any reference of cancer.

Rebellious fans have rallied under the banner Stop Darth Weinstein! They have begun spamming the email addresses of Weinstein employees and protested at the NYC and LA premiers of the Weinstein film Superhero Movie.

The release date of the movie is yet to be announced, and fans will try their hardest to get the Weinstein company to change the film back to its original form. The form that most beleive had heart, but now may just be another run-of-the-mill comedy. Only time will tell.

On a side note, a story more related to the BFFC was the picture of Boba Fett next to the actual article in Wired Magazine. It seems our Fett man was featured in the magazine, although it appears to be a fan made costume. The picture can be seen in the link.

On the blog Married to the Empire, you can see behind-the-scenes pictures of the Wired photo shoot, which include candid shots of a Boba Fett costumer from the 501st.