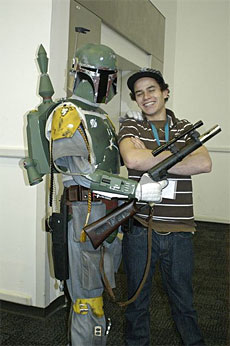 With the news of Boba Fett being in the upcoming live-action Star Wars TV show, we here at The Boba Fett Fan Club sat down with actor Daniel Logan to check up and see how the man who played young Boba in “Star Wars Episode II: Attack of the Clones” is keeping himself busy as of late.

In the years since AOTC, what other projects have you been working on?

I did a film, called The Legend of Johnny Lingo, just after Star Wars came out. I also did some voice over work in New Zealand. I was the voice of TakaPu, a bird who traveled the Pacific Islands. It was a fun project and still plays in New Zealand to this day. I have also been going to school and taking acting classes here in California.

With all the rumors of Boba Fett being a central character in the live-action Star Wars TV show going around, what have you heard of the show? Also, are you interested in reprising the more mature and darker role of Boba for the show?

I have not heard any more news than anyone else. I would be honored to come back and play Boba Fett again. I do think it is going to be amazing and I am looking forward to seeing it!

What do you hope to see out of Boba Fett as a character in the live-action series? After all, he’ll be right around your age in his life as the galaxy’s most notorious bounty hunter.

I am sure the creative team behind the series will do a great job with Boba Fett, assuming the character is going to be a part of the series. There is a lot more to explore about Boba. If he is part of the series, I am sure many exciting adventures will be seen.

When you’re not working, what do you like to do to have fun or relax?

I like to paint and go hiking with my dogs. Near where I live there is a great place to hike that has waterfalls and open expanse to have a great time. I also enjoy playing videos games, they get better and better each year.

Do you still live in New Zealand and travel to all of your appearances or do you live in the States now? If so, is there any major difference?

I now live in southern California. Have been here for almost 7 years now, at least at the time of this interview. There are big differences between the US and New Zealand. First off, there are only about 4 million people in the entire country of New Zealand. Plus southern California is one of the main places for the entertainment business. I love New Zealand and it is a beautiful country with great people. I also love the US, for the same reasons. It is great to be able to go back and forth and experience the best of both countries. If you have not been to New Zealand, try to get there. Great people, great scenic beauties to see and a great time to be had!

You’re a familiar face at several science fiction conventions around the world, what is your relationship like with the fan community?

The fans are wonderful! They are so supportive and kind. To this day I am still amazed at how global the fandom of Star Wars is. I have been all over the world thanks to Star Wars and the fans. I really enjoy going to events and meeting people. I hope they feel the same about meeting me! I want to give a huge thanks to all the fans out there. You have made Star Wars what it is today. Without you guys I would not have been a part of something so fantastic as Star Wars.

Do you have any favorite convention moments that stand out in your mind that you’d like to share?

There are so many. But one that stands out is a recent one in France. I was at an event in Cusset, France and it was wonderful. One of my favorite moment from that event was the parade around the town with all the costumed fans. Traffic was stopped and we were driving around all the streets of the town with music playing and people joining in from the street. It was a blast!

Describe to us, if you will, a bit about your relationship with Jeremy Bulloch and Tem Morrison.

Jeremy and Tem are both great guys. I was a fan of Tem even before I worked on Star Wars. He was the star of a New Zealand film called “Once Were Warriors. He played a very nasty guy in that film. But in reality his is one of the nicest and kind people I have met. I had a wonderful time with him during filming and continue to have a great relationship with him to this day.

Jeremy has always been great to appear at events with. We have fun together and I love going on stage with him. He has been a mentor to me. Jeremy is so good with fans and I really respect him for his good nature.

Both Jeremy and Tem are good friends and I respect both of them very much.

Do you get into or have you read any of the Expanded Universe comics or books about Boba Fett, especially those written by Karen Traviss?

I did read the young Boba Fett from Scholastic series. I really liked them. However, I was sad to find out Boba had to throw his aquatic pet into the Kamino ocean, only to see it get eaten by a bigger animal. I do want to read some of the other Boba Fett stories. I am sure they are fascinating! Any suggestions?

Lastly, is there a website for you or do you keep a blog updated with projects or things you have going on that fans can check out?

Yes, I have a blog on starwars.com, http://blogs.starwars.com/daniellogan. It has been a while since I posted, but I will be on there more often. Feel free to stop by.

Thanks for talking to us, I know everyone will enjoy it especially with all the huge news at Comic Con that was announced. Hope your trip to London and San Diego was fun, take it easy!

Thanks for taking the time to read my interview and thanks to therealmccoy and the other great staff at bobafett.com for asking me to do the interview. Take care and may the Force be with you all!

Stay tuned at BFFC for updates on the new TV show.