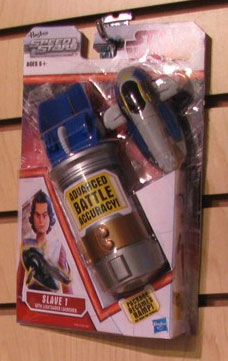 BFFC just got a tip from fan Peter G. about the RebelScum.com's post regarding a clue for Boba Fett making his way into the Clone Wars animated series:

Justin L. pointed out that the young Boba Fett character shown on the Speed Stars packaging at Toy Fair 2010 looked like a young Boba Fett. After further research I think its safe to say that baby boy Boba is indeed ready to make an appearance on the animated television series, The Clone Wars. When will it happen? That's another story, but with product being shown that will be released prior to season three, my guess is sometime between now and the end of season two. We did just bump into some Mandalorians in the series, remember?