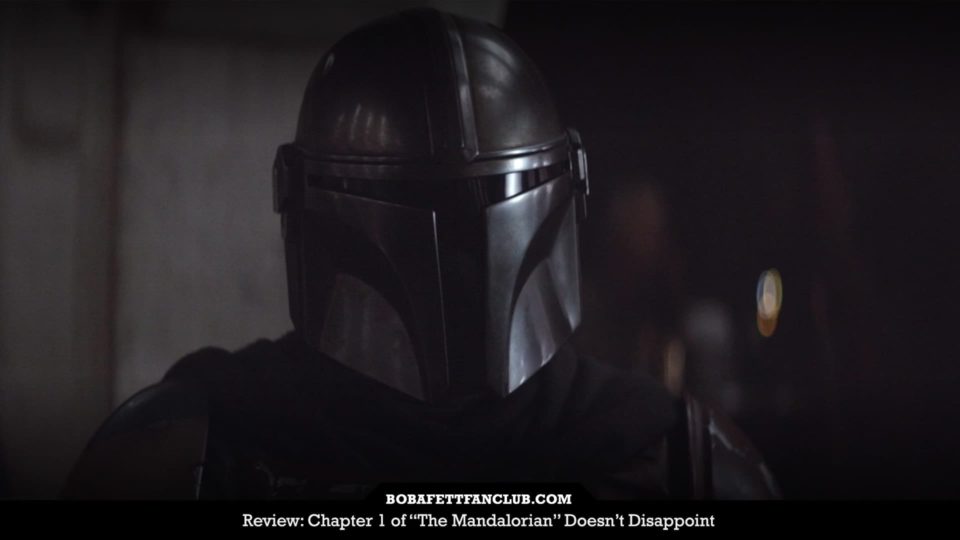 “The Mandalorian” is a new show exclusively on Disney’s debut streaming service, Disney+. It is also the first live-action Star Wars television series. I have been anticipating this show for a long time now and after watching the first episode, I was not disappointed. Here is my review of the first episode.

The tone of “The Mandalorian” is definitely set within the first few minutes of the episode. The “Mando” does not hesitate to end a fight before it has begun. He takes out three cantina patrons with just his hands (and a door) and then proceeds to cash in on the bounty he was originally after. I am glad that they chose to go the route of hand to hand combat in this scene rather than have a shootout. It feels like we don’t get many non-lightsaber fights in live action films.

Once the hunter had acquired his bounty, a talkative blue alien, he proceeded to his ship where they encountered a sea serpent like creature. The creature bites onto the Razor Crest, the ship of our yet-to-be-named Mandalorian, which requires him to grab his stun rifle and zap the creature. For those of you who have seen the “Star Wars Holiday Special,” then this should look very similar to when Boba Fett used his stun rifle on a water creature. Once the ship had taken off, the Mandalorian wasted no time in freezing his target in carbonite and placing him alongside his many other frozen bounties. He arrives at his set destination and turns in his bounties to the Bounty Hunter Guild leader, Greef Carga, who then directs the “Mando” to a mysterious client for more work.

The masked Mandalorian meets with this “client” who hires him to retrieve a bounty dead or alive. In exchange, the bounty hunter is given a piece of Beskar ore as down payment — Beskar is the metal that Mandalorians forge their armor from. The Mandalorian accepts the contract and is on his way. Before he heads off, however, he enters into an underground building that appears to be the home of a Mandalorian Clan. This is probably my favorite scene from this episode because it shows off many, fully armored Mandalorians, which is something we’ve never seen before in live-action. He goes into a back room where a Mandalorian blacksmith is working on some metal. He sits at a table and hands a Beskar slab to the blacksmith. The female blacksmith proceeds to smelt the slab down into a liquid and forges it into a new shoulder plate for the Mandalorian.

While she is doing that, the Mandalorian has a flashback of what appears to be him as a child. His parents and village appear to be under attack and he is put into a hidden room underground. He says that he used to be a “foundling.” This is new terminology but we can assume that it means he was adopted by Mandalorians shortly after his parents were killed. I like this because it is very similar to the act of adopting war orphans by Mandalorians in “Legends” (previously “Expanded Universe”).

The next scene we see is the Mandalorian landing on the planet to track down his target. Shortly after he leaves his ship, he is attacked by two Blurrg, which are two-legged beasts. Luckily, they are sedated by a Ugnought named Kuiil, who offers to help the Mandalorian in his mission and even takes him into his home. The Ugnaught determines that they must travel by Blurrg to get to their destination. The Mandalorian responds, “I don’t know how to ride a Blurrg.” Kuiil simply replies, “I have spoken.” We then have a short scene where the “Mando” learns to ride a Blurrg. He has trouble with it until Kuiil reminds him that the Mandalorian’s people tamed and rode the great Mythosaurs. This reference to the Mythosaurs is quite interesting. In “Legends,” the Mandalorians hunted the Mythosaurs to extinction and used their bones for buildings.

In the final act of this episode, Kuiil guides the Mandalorian to the camp where his target resides. However, while scouting the base from afar, the “Mando” sees an IG assassin droid approach the base. The droid reveals himself as a Guild member and demands for his target to be handed over. The guards at the base refuse and open fire on the droid. The IG unit makes quick work of them and moves into the base. The Mandalorian rushes in and tells the droid to stand down. The IG unit shoots the Mandalorian on the shoulder plate, which sparks a humorous moment of the Mandalorian explaining who he is. The two hunters decide to combine forces and split the reward. Shortly after this, they are attacked by a regrouped enemy and are forced to shoot themselves out of the situation. This scene was loads of fun to watch. The action wasn’t rushed and watching the IG unit swivel around and fire on the enemy was a sight to behold.

After the fight, the two bounty hunters proceed into the building in search for their target. The transponder easily locates it, which is revealed to be a child — an alien of the same species of Master Yoda. The IG unit chooses the typical droid approach and wants to bring the child in dead. The Mandalorian, however, has other plans and shoots the IG unit before he could carry out his objective, ending the episode.

Even though the episode itself wasn’t an hour long, I found many enjoyable things about it and I definitely see this show succeeding from here on.