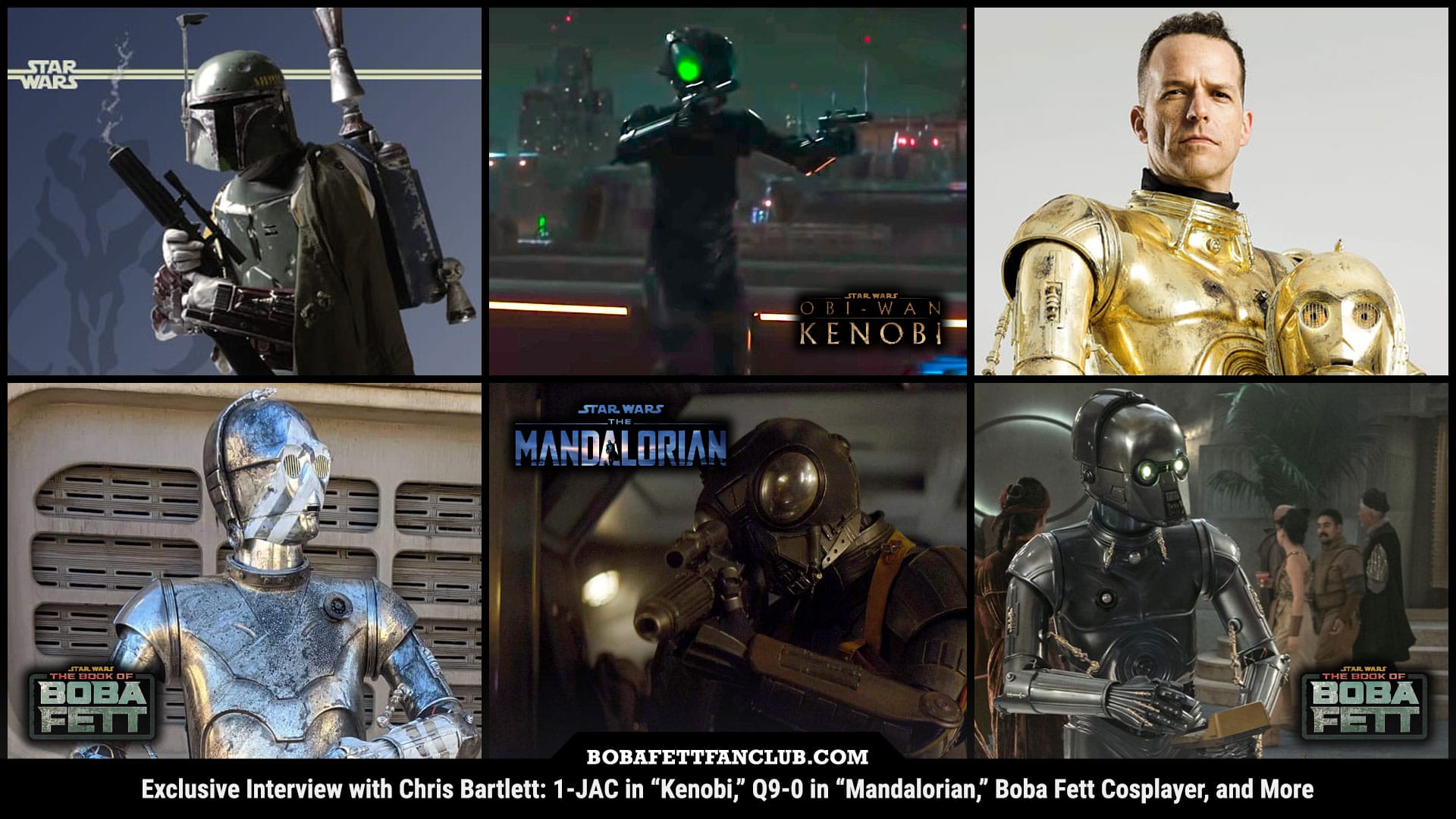 If you’ve seen any of the Disney+ Star Wars shows, you’ve seen actor Chris Bartlett, even if you didn’t know it. Bartlett is the man behind the mask of many of the live action droids in those series, including Q9-0 (Zero), a mercenary protocol droid in “The Mandalorian,” and an unnamed server droid at Garsa Fwip’s Sanctuary in “The Book of Boba Fett” who met an untimely camtono-explosive death. He most recently appeared in “Obi-Wan Kenobi” as the original protocol droid C-3PO, first played by Anthony Daniels, and 1-JAC, a new LOM-class bounty hunter droid.

Boba Fett Fan Club spoke with Bartlett to find out how an ugly website and a Boba Fett costume led to Bartlett’s acting career, what makes a good Fett cosplayer and his process for creating all-new droid characters.

Boba Fett Fan Club: What’s your Star Wars origin story – how did you become a fan?

Chris Bartlett: I watched the original film in the theaters in 1977. Droids, stormtroopers, star cruisers, dark villains, explosions, heroes, a princess. Then there were the action figures (they’re not dolls!) that allowed me to sustain my young imagination in making my own stories in the backyard or in the shag carpet in my bedroom. Building my own Luke Skywalker or droid costumes  or cardboard spaceships with my parents as a kid also kept me pretending to be part of this galaxy in my own way.

BFFC: You’ve been involved in the Star Wars movie-accurate prop and costume communities for quite some time, and have a history of cosplaying as Boba Fett. How did you get your start with that?

CB: In 1999, I found an ugly website that sold stormtrooper armor and licensed Don Post helmets. I offered to redesign the website in trade for stormtrooper armor. Once the job was done, I assembled the armor kit and looked online for events I could wear it to astronomy shows, toy store openings, fan conventions. Then I found the 501st [the volunteer-led group that creates and wears screen-accurate Star Wars costumes for charity] and helped found the Central California Garrison. Then, I found the Replica Prop Forum where I learned from hundreds of people how I could build my own prop replicas out of off-the-shelf items. Then I was inspired to build other costumes so I built a Tusken Raider, Jawas, Twileks, bounty hunters, and GNK droids for my kids.

Then I saw people building Boba Fett costumes (my all-time favorite character), so I asked questions of the seasoned builders on The Dented Helmet forum, studied all I could and became one of many Fett costumers. In 2003, once I got my costume to the point I felt it was acceptable (even with always improving), I would wear it to conventions as a fan, but I would work on making it appear that Boba Fett was real. As a performer, I had actually become Boba Fett – indistinguishable from the real thing – so I’d act that way with show attendees. Talk how he talked, walk how he walked, nod how he’d nod – all to try and give a realistic little show for each person who encountered Boba. That’s what led to a career in acting. 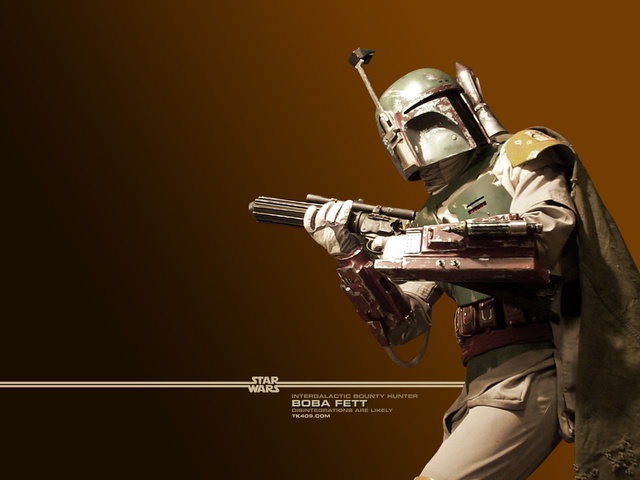 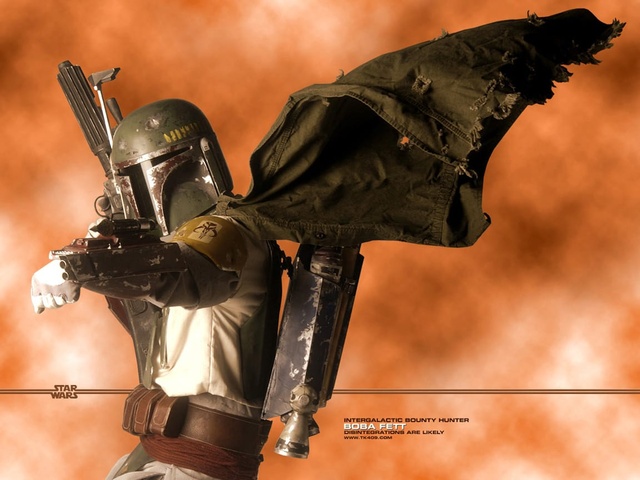 BFFC: We spoke to artist Joe Corroney earlier this year and he said that you were his model for Boba Fett for his “Mandalorian History” piece that appeared in Star Wars Insider. You also were Tommy Lee Edwards’ Boba Fett model for the cover art of Star Wars Empire #28. What were those experiences like, from the modeling through to seeing the final products?

CB: Yes! A few years ago Joe contacted me because he seen my costume online. He was looking for some action pose references for Boba Fett. I sent him a bunch of shots, showing some real energy, and then I sent a few extra. That was it. Joe did all the rest of the work! 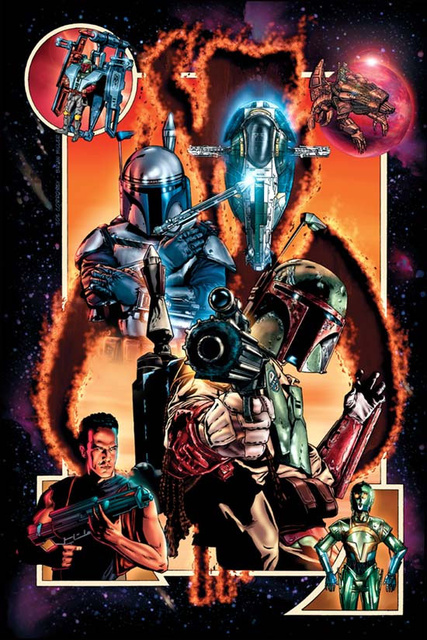 When Tommy Lee Edwards contacted me, he had seen my photos online. He invited me to his studio in North Carolina to do a photo shoot for reference. I tried to exude the character that I wanted to see on a comic book cover. In 2021, Tommy contacted me again and I sent him a bunch of shots for a new Fett cover. So I’ve been thankful to have appeared as the bounty hunter on two covers, courtesy of Tommy’s fabulous technique. 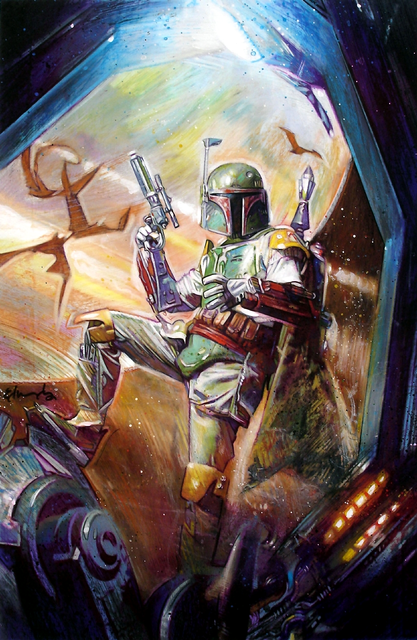 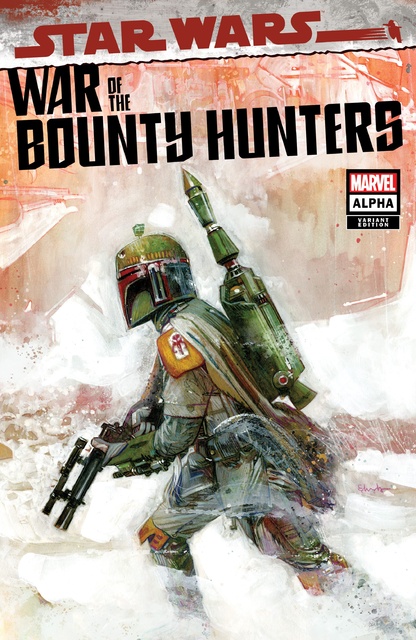 BFFC: What do you need to do to be a good Boba Fett cosplayer?

CB: You know what? I saw a 10-year-old kid at Star Wars Celebration Anaheim this year walking to the Uber pick-up spot with his parents. He was portraying the latest, darker Boba Fett. He had a nice Hasbro helmet, homemade armor, spray painted blaster held as if ready to draw, walking with purpose, looking straight ahead. He was already doing well. When I said, “Looking good, Boba…” he did something that totally sold it. Without hesitation, he did the NOD. Oh my gosh, that kid was not playing. He was committed and in that moment, was ACTUALLY Boba Fett!

It isn’t even having the best costume that does it. It is the confidence and the commitment to performing with purpose that transforms any costume into a CHARACTER. 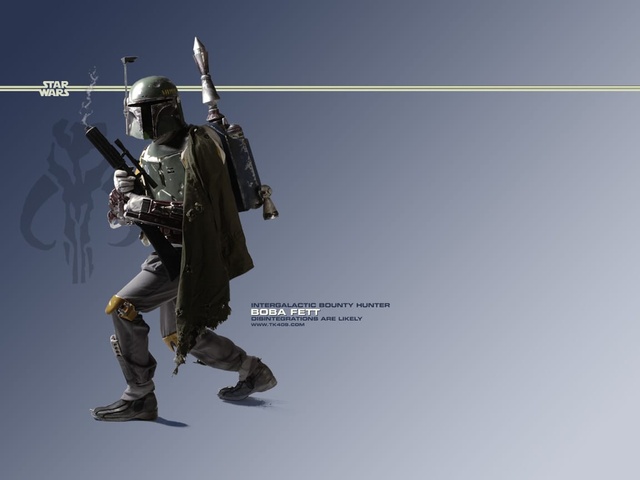 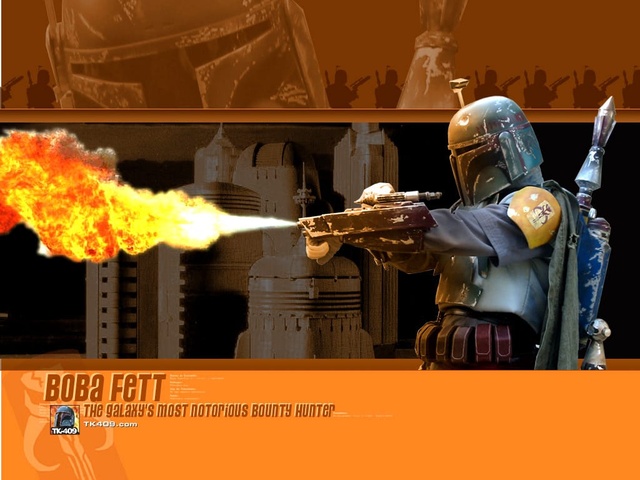 BFFC: What was it like to be called in by Lucasfilm to audition after they saw your local performances?

CB: It was completely unexpected! You know, when building these costumes, it is always the dream to be able to work in Star Wars as a character. I dreamed about it every day, but I never imagined it would actually happen.

The audition was for C-3PO. After I built Boba Fett, I started C-3PO, and because of a serendipitous sequence of events that I can only attribute to the providence of The Maker, the golden droid happened to be what got their attention.

Steve Sansweet [chairman and president of Rancho Obi-Wan, a non-profit museum of Star Wars memorabilia] was the one who found me and recommended that Mary Franklin [former Sr. Events Lead for Lucasfilm] contact me to come in. The suit was at the chrome shop when they called, so they had the costume shipped to Lucasfilm and flew me out from North Carolina to finish building the costume at Lucasfilm. That alone was the pinnacle of my fandom at that point in my life.

I suited up, and I said the line, “Hello, I am See-Threepio, human-cyborg relations.” The next day we flew with the costume to Sydney, Australia, for the audition. Now, it’s been 16 years that I’ve performed continuously on television as this character for Lucasfilm.

But it all started because I loved making the character shine through the costume. 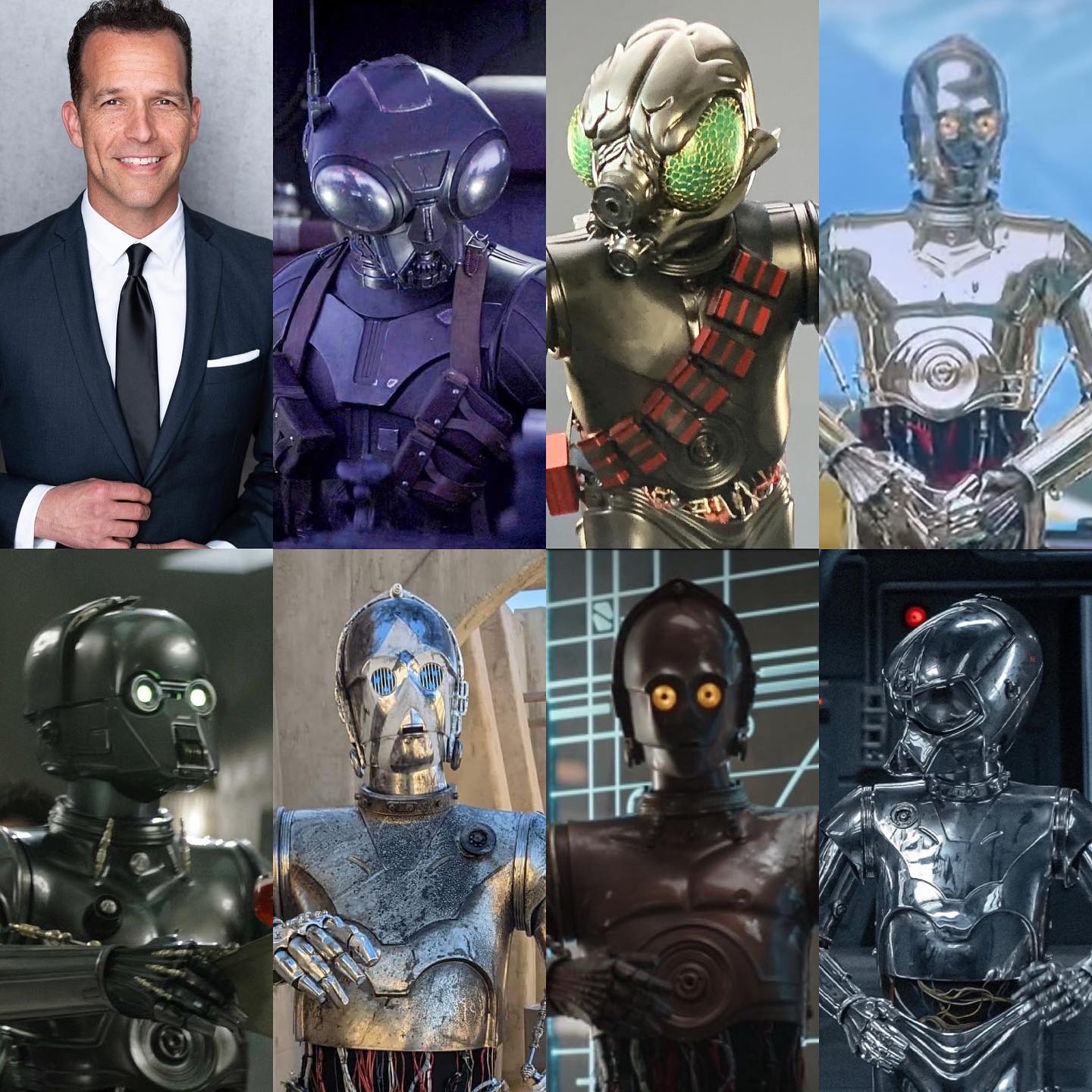 Chris Bartlett and his roles, recently shared on his Instagram

BFFC: How do you develop your characters, whether they be those that are well known like C-3PO, or those you have to create from scratch?

CB: Well, C-3PO is a well-established character, so I have tons of performance reference with Anthony Daniels. I studied those exhaustively. Watching over and over to understand his animation helped get the mechanics down. But it’s more than that.

The other characters, all new, each have their own personality: Q9-0 is a cold, calculating machine. The Teacher droid [in “The Mandalorian”] is a patient and kind helper. The Traffic droid [in “The Book of Boba Fett”] is a worn-out and loosely-jointed antique. 1-JAC is a quick-response gunslinger. I look at them, and the script, and I create a backstory for each one. I play them all so I can make them feel different from each other. 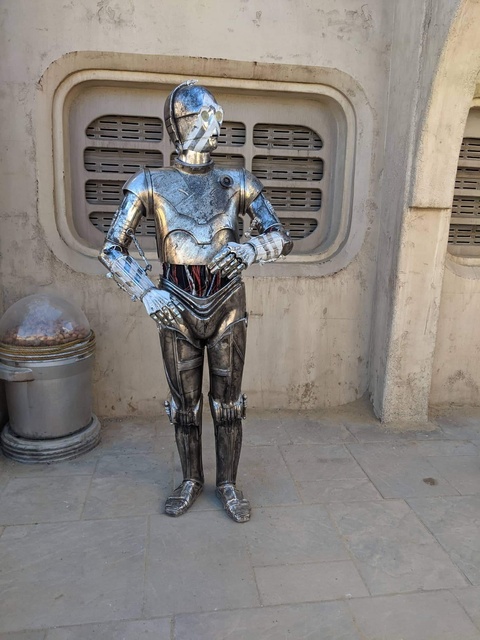 BFFC: What was filming “The Mandalorian” and “The Book of Boba Fett” like?

CB: A lifelong dream come true. Mando more so because I got to fly through hyperspace in the Razor Crest, had shootouts in the street of Nevarro, and a few magnificent deaths. 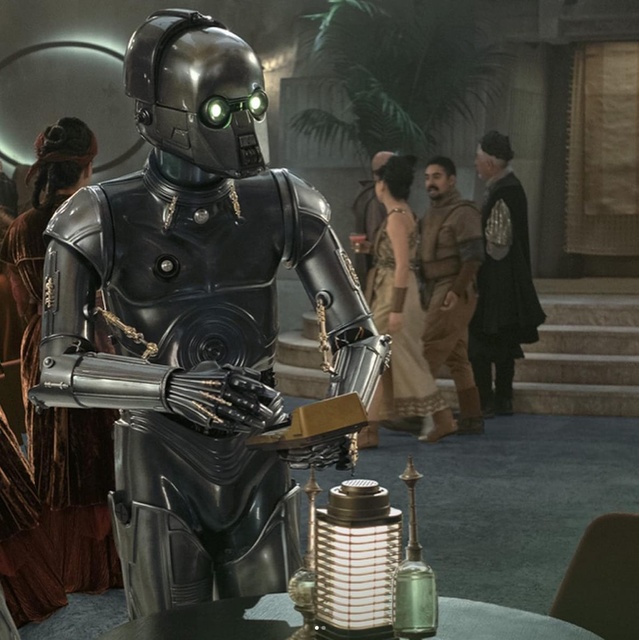 BFFC: Who is your favorite Star Wars character that you’ve played and why?

CB: Zero. I Like him the best because I got to do so many different things with him. I worked with a crew of excellent actors, plus bad guys are more interesting to play. They’re more unpredictable. Also, anytime you get a great death, it’s fun for an actor.

BFFC: What did you do to prepare for your roles in Kenobi as C-3PO and 1-JAC? What was your backstory that you created for 1-JAC?

CB: For C-3PO, I had been preparing for 15 years. Practicing, studying, rewatching and performing on television and live events. 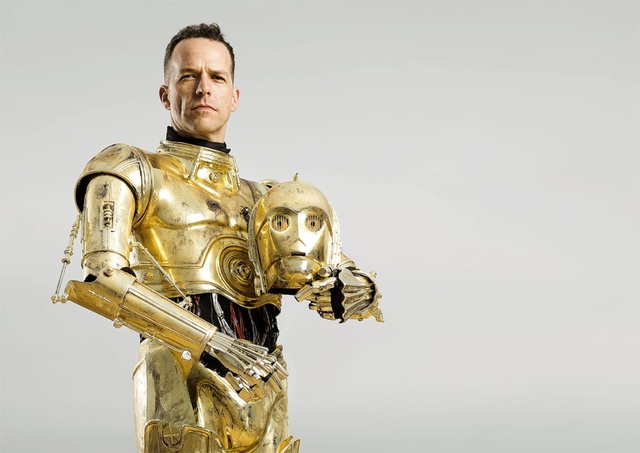 1-JAC is a LOM-class droid. In “The Empire Strikes Back,” 4-LOM  was very static. Our childhood imaginations went wild with what his history might be, what his potential could be, and how he came to be chosen by Darth Vader. I’ve never seen 4-LOM in action except in the comics!

I tailored the suit to allow my body to be less restricted by the design of C-3PO and more open to wider stances, quicker draw and to have more of an agile ability. We designed 1-JAC to be the droid of action we always imagined while playing with the figures or reading the comic books. And so that’s how I played him, exactly how I wanted to see a LOM class droid. In the end, I met with another fantastic death. That had its own category of action… or deactivation. And that was pretty satisfying to see it on the screen. 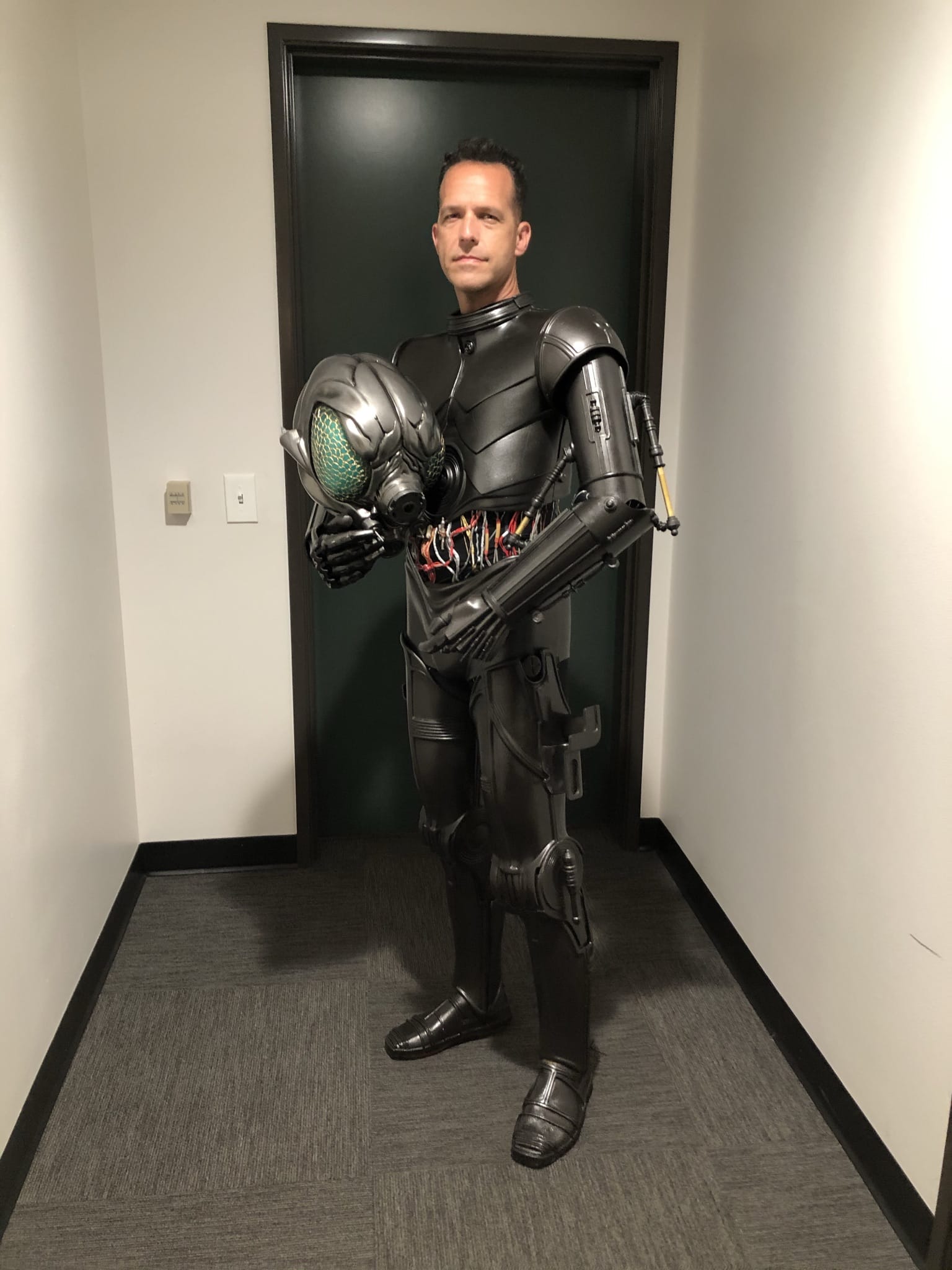