"Return of the Jedi" Was To Include More Boba Fett, Says Former Lucasfilm Fan Rep

“Originally Boba Fett was set up in Empire as a character, and the third movie’s plot was going to be more about Boba Fett rescuing Han Solo and all of that,” Miller revealed. “Boba was gonna be the main villain… That was set up, why he was taking Han Solo away, why there was a thing with him in the Christmas special.

“When George decided not to make a third trilogy, he completely jettisoned that story line, which is why in the first ten minutes, Boba Fett gets bumped into and falls into the mouth of a giant monster,” Miller added. “So he took what was planned for the third trilogy, which was the confrontation between Luke and Darth Vader, and the battle with the Emperor, and that got squished down from three movies to one movie. And that became the plot of Jedi.”

See their full article for more context and revelations from their interview.

While Miller worked for Lucasfilm when it was called Black Falcon, Ltd., we can’t find any copies of Lucas’ written outlines for the original sequel trilogy — of course well before we got “The Force Awakens,” which differed from the plan. We do know that Boba Fett wasn’t even mentioned in the first typed draft of “Revenge of the Jedi” (the original title before being re-named) and only showed up later when co-written by Lawrence Kasdan.

Zakarin’s article also cites Starlog #31 from February 1980, where Craig also provided some commentary on the record at that time for the science fiction magazine. Check out this early description of Boba Fett and some rumors about him:

Another of the new characters has the evil-smelling name of Boba Fett. They say he’ll rival Darth Vader for sheer terrorism. Apparently, he’s a remnant of the old Imperial Shocktroopers — who once made the Stormtroopers look like school-crossing guards. Then others say:

No, he was never a Shocktrooper; he has merely adopted their uniform as a symbol of his nefarious purpose.

(You may have actually seen Boba Fett before; he appeared with Darth Vader in the Star Wars Holiday Special on CBS TV last November.)

Boba Fett wears Wookiee scalps on his shoulder! (Or, alternately, dangling from his belt.)

The most interesting speculation about Boba Fett is that he is a bounty hunter who will work for whichever side pays him the most, and he plays both sides when he can get away with it.

Here’s a rumor within a rumor: Boba Fett will be played by one actor, and his voice will be overdubbed by another — and even those in the Lucasfilm office do not know who will be dubbing the voice!

Not included in Inverse’s article, some other trivia that we can add to this from official sources includes the “Star Wars: The Annotated Screenplays,” where it’s noted George considered a fight with Boba Fett and Lando:

Originally George Lucas envisioned a fight between Boba Fett and Lando but eventually suggested instead that the power pack on Boba’s back should be hit and thrown around, as if he had “a balloon on his back that got air out of it.” — Star Wars: The Annotated Screenplays (p. 259)

George Lucas has also said on the record that he considered a different ending for Boba Fett climbing out of the Sarlacc. Here’s our transcript of his remarks at 33:01 on the “Return of the Jedi” DVD commentary circa September 2004:

“In the case of Boba Fett’s death, had I known he was gonna turn into such a popular character, I probably would’ve made it a little bit more exciting. Boba Fett was just another one of the minions, another one of the bounty hunters and badguys. But, he became such a favorite of everybody’s that, for having such a small part, uh he had a very large presence. And now that his history has been told in the first trilogy, y’know, it makes it even more of a misstep that we wouldn’t make more out of the event of his defeat, because most people don’t believe he died anyway. I’d contemplated putting in that extra shot in where he climbs out of the hole, but y’know I figure that’s . . . it doesn’t quite fit, in the end.” 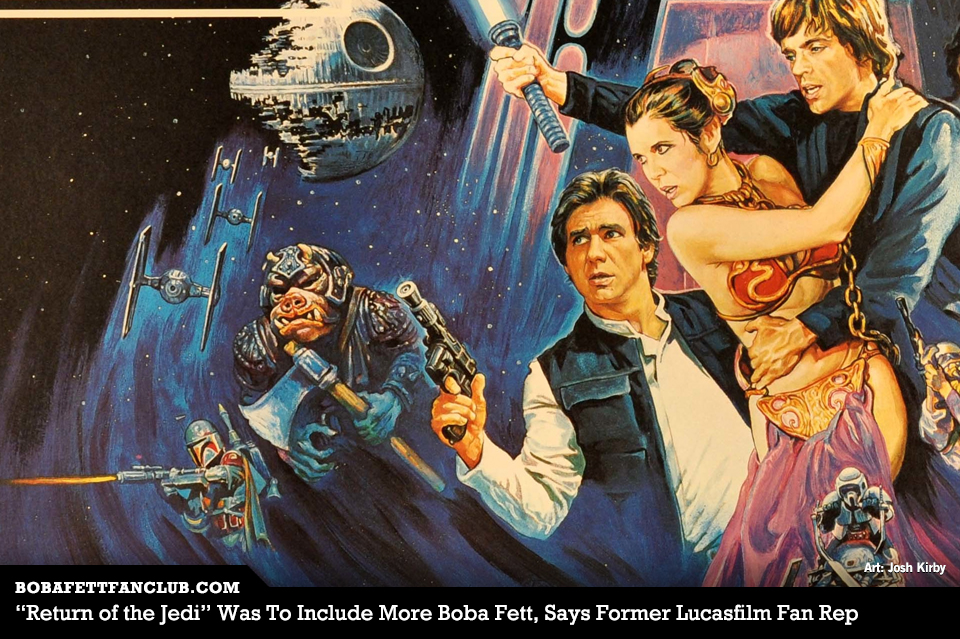