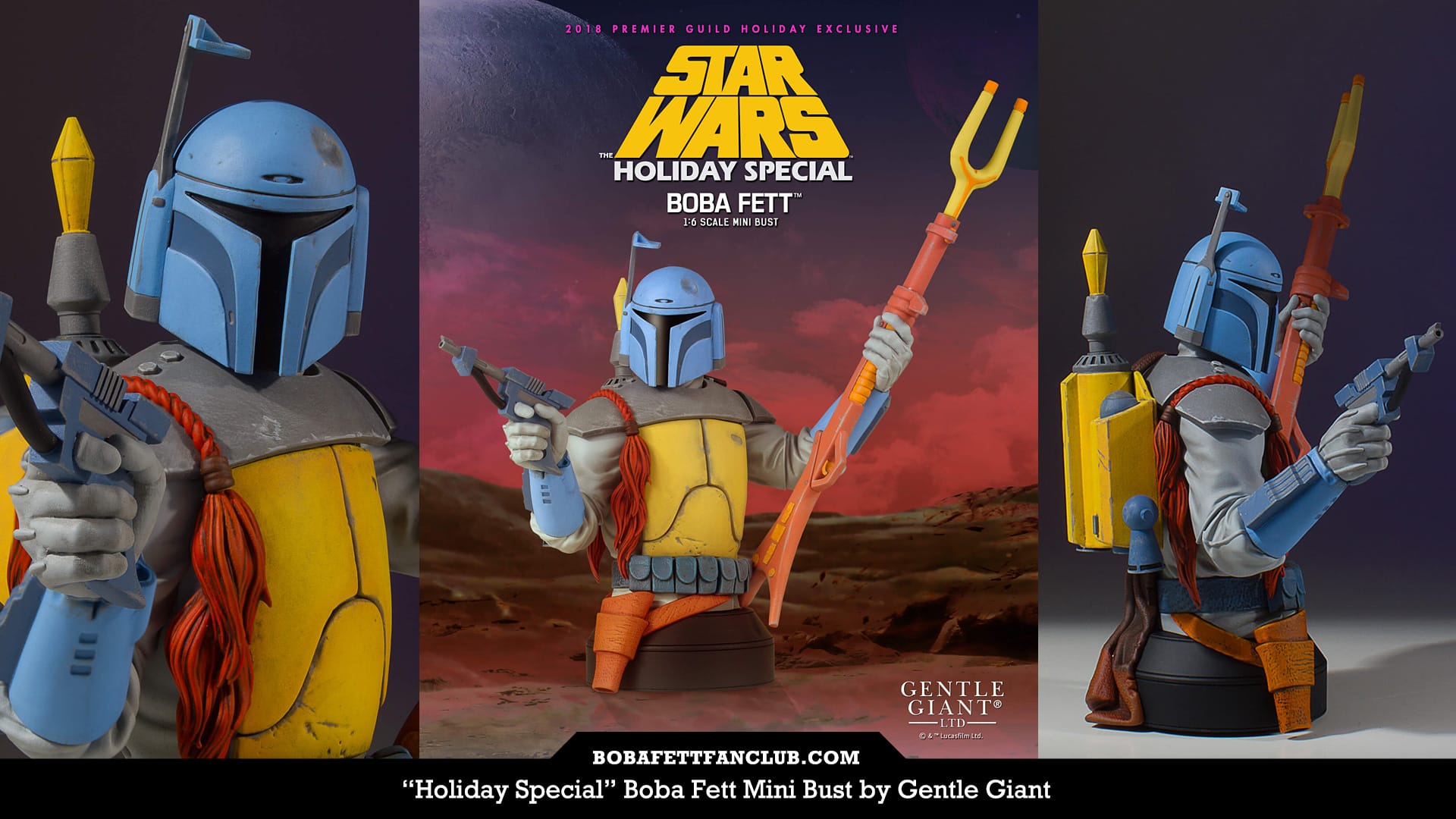 For the causal Star Wars fan, some of the current Boba Fett offerings might be a bit confusing. But for the hardcore Boba Fett fans who love the more obscure Fett stylings it’s a boon time. Enter the latest entry from Gentle Giant Ltd.

What’s not to love about this 1/6 scale mini bust of the Holiday Special Animated Boba Fett? Well, maybe the fact you have to be a Premiere Guild member to order one. Fortunately we had the chance to ask them some questions to get the skinny on this piece.

You have until closing time today (Friday 8/17) at GentleGiantLTD.com to place your order to be guaranteed to get one.

BFFC: Has a Holiday Special Boba Fett been on the drawing board for a while or was it a spur of the moment idea for his 40th birthday?

GG: I think the idea first came up over a year ago when we were looking at our plans for the 40th Anniversary of Star Wars: A New Hope. As we looked ahead we said “you know… one year later is the 40th anniversary of the Star Wars Holiday Special…”

BFFC: Did you use any other research or reference material for sculpting and coloring besides the original animated short?

GG: We relied mostly on the original animation for our reference, but we have previously made an animated maquette of the animated Holiday Fett several years ago.

BFFC: Were other formats considered? If so why settle on the mini bust?

GG: The majority of our annual holiday items have been mini busts, and it was a version of the character that we had not made in that format already.

BFFC: Why make it a premiere guild exclusive?

GG: Every year we make items that are exclusive to members of our Premier Guild collector’s club and we always do one of them at the holidays that often is holiday themed. Since this is the 40th anniversary of the Star Wars Holiday Special, we thought this would make a great holiday item. Happy Life Day!

BFFC: How was the pose decided upon? Was it inspired by a particular moment in the animated short?

GG: We left the pose up to our pre-production artists. We just wanted to make sure Boba Fett had both the blaster and the twin-pronged electropole, because they are so retro-cool!

BFFC: Holiday Boba fans who aren’t Premiere Guild members will probably drive up the secondary markets (eBay etc.) to get one. Is that ever a consideration on how large a run is or how a particular piece is released?

GG: No. We do not consider the secondary market. These are exclusive to our Premier Guild as well as a short list of Gentle Giant friends and vendors and we make them to accommodate those orders. Again, access to order these is one of the benefits of being a PG member.

BFFC: Any chance of seeing a Holiday Special Boba Fett turn up in any other Gentle Giant formats down the line? Will the success of this one play a role in that decision?

It is possible. As I said we have done him as an animated maquette previously. If the fans really love him, we could possibly see him in other formats down the line.

BFFC: Any Boba plans for the 40th anniversary of The Empire Strikes Back?

Nothing to announce yet.

So what do you think? Planning on picking up this piece? Let us know your thoughts.