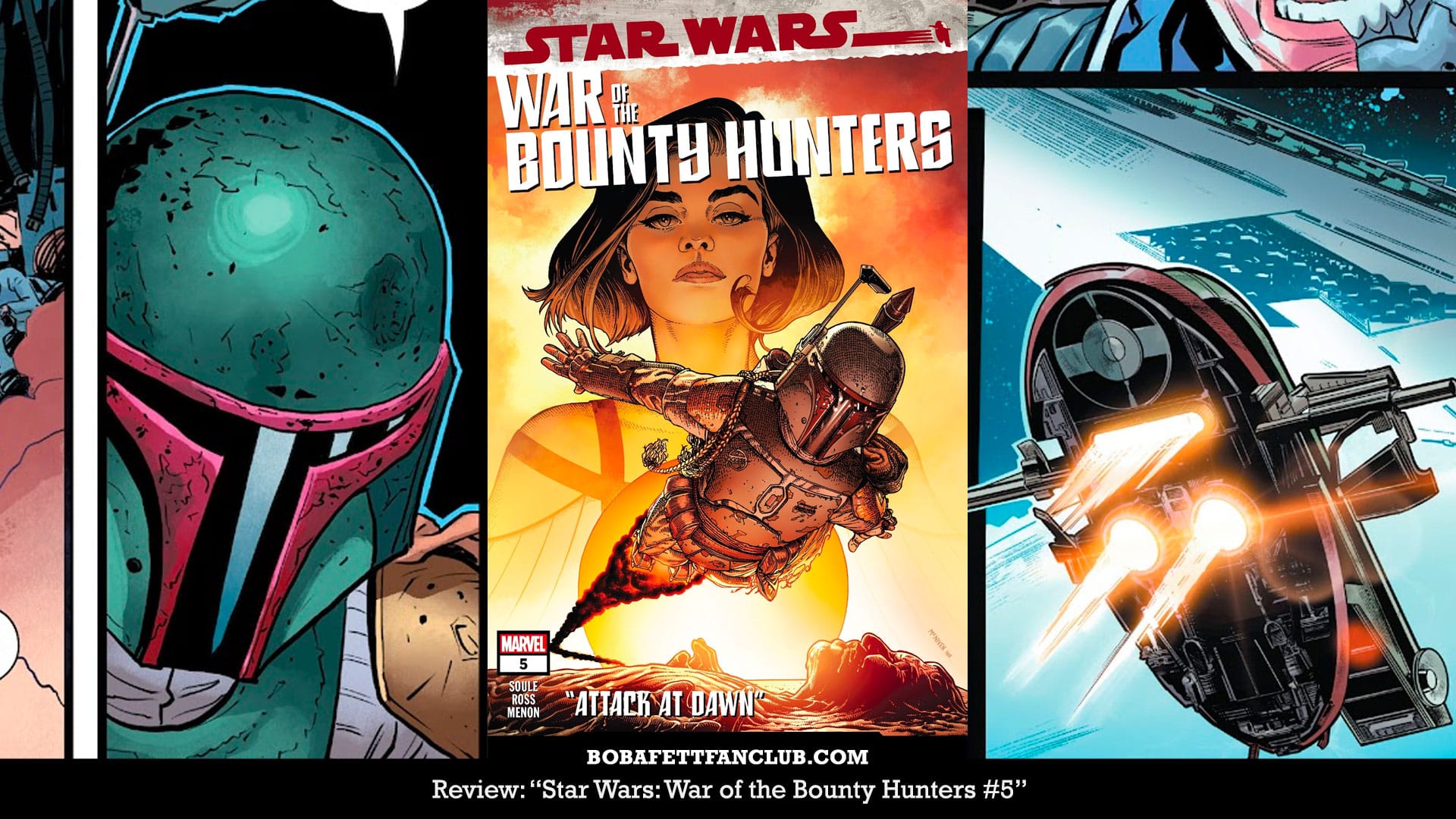 After a strong start and a weak middle, at last we reach the “final” issue of the so-called “War of the Bounty Hunters.” It wasn’t much of a war at all, sadly. The original “Bounty Hunter Wars” book trilogy and “Shadows of the Empire” showed us a way better war. But at least this last issue was better in some ways than the previous two — I will give credit where credit is due — but alas still too full of out-of-character stunts.

The Imperial shuttle which has Han Solo aboard is being pursued the might of the Hutt fleet. This is a hilariously bad move by Bokku the buff Hutt, and I am all here for it. It results in a lot of carnage and chaos, the kind of thing that would’ve been awesome to see in live-action. We get a few panels showing off the action, but this space battle should have been a greater focus in the comic. A pity.

The Imperials note that, other than the Hutt fleet, there are 2 vessels. “Scans indicate they’re a Firespray-class prison guardship and a Corellian Freighter — both ancient.” I love that archetype in science fiction of an old, supposedly obsolete weapon or ship still being able to throw down with the best of them, years after it was first conceived. 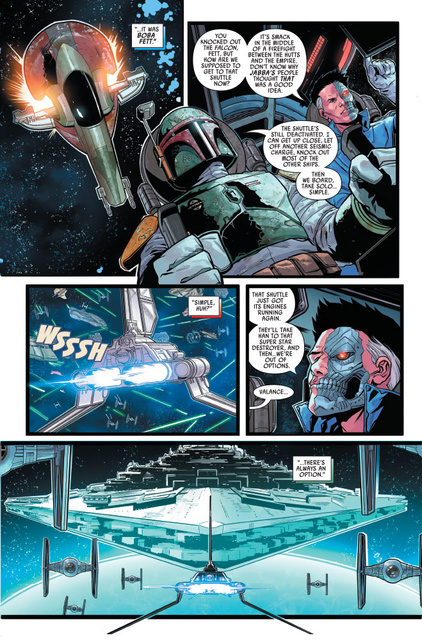 Meanwhile, fan favorites Boba Fett and Beilert Valance are able to board the Star Destroyer. Boba Fett simply requests boarding, claiming to still be working for Darth Vader. The Imperials grant him permission to land, since they have a much bigger issue dealing with the Hutt fleet. Sometimes the best opportunity is a distraction, and sometimes the best distraction is someone else causing a tidal wave of sheer, moronic, all-consuming chaos. To succeed in the bounty hunter life, you have to seize these opportunities like a rancor seizing it’s prey before eating it. Let there be carnage while you complete the mission.

The Rebel leaders Leia, Lando, and Chewy are also able to board. To make a long story short, an Imperial officer has defected to Crimson Dawn, or a member of Crimson Dawn infiltrated the Star Destroyer. This is never specified, but they give a hint to the Falcon indicating they are working for Qi’ra.

We also see a brief conversation between buff Bokku and someone unseen. They both end the conversation with “Await the Dawn” which implies that Bokku is working for Crimson Dawn. Maybe this all-out assault was done intentionally, to weaken the power of the Hutts… if so, Bokku has betrayed his own race and, although his gains at the gym are impressive, I really don’t think that will be enough to protect him from the wrath of the Hutt clans. I never thought I would be complimenting the physique of a Hutt, but here we are. Welcome to Star Wars in 2021. 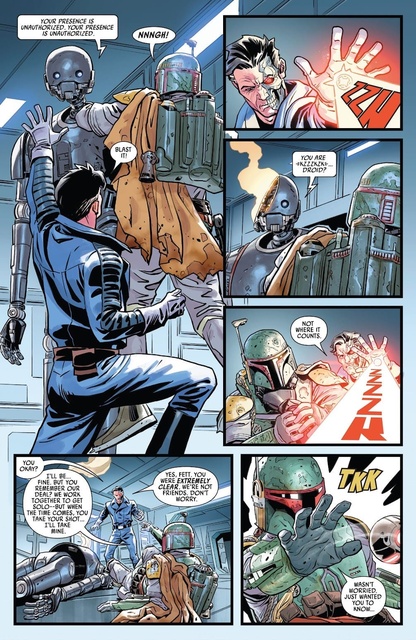 While the battle in space continues, Valance guides Boba through the Star Destroyer to the detention block. A droid that is the same model as K-2S0 grabs Boba. I find it odd that a loud, clanking droid could get the drop on Boba. But of course, as I have noted before, this comic is being written without much understanding of Boba at all. Valance blasts the droid, saving Boba. Our favorite bounty hunter returns the favor by chucking a sticky grenade on Valance, which blows him apart quite severely. He’s not dead — the final panel of the comic implies a future arc with Crimson Dawn — but he is for sure incapacitated and out of the fight. His inner cyborg parts are blown open and exposed. If he had still been an ordinary human, he would be beyond dead right now.

Meanwhile, Vader is still pursuing Luke, starfighter to starfighter. Their exchange is boring and forgettable. We already know what will happen in “Return of the Jedi” and nothing said or done here can compare to that. Vader is contacted by the Emperor, to stop the Hutts and make an example of them. Thus, he lets Luke go.

Boba Fett and the Rebel Leaders reach Han at the same time in the detention block. Before any of them can do anything, a missile from a Hutt starship hits that part of the Star Destroyer. It opens up the Star Destroyer, and what follows is a very laughable, childish sequence. Before it continues, we see Vader arrive to the location where the Hutt council was monitoring the situation from. He ignites his lightsaber, and I’m sure you know what happens next. 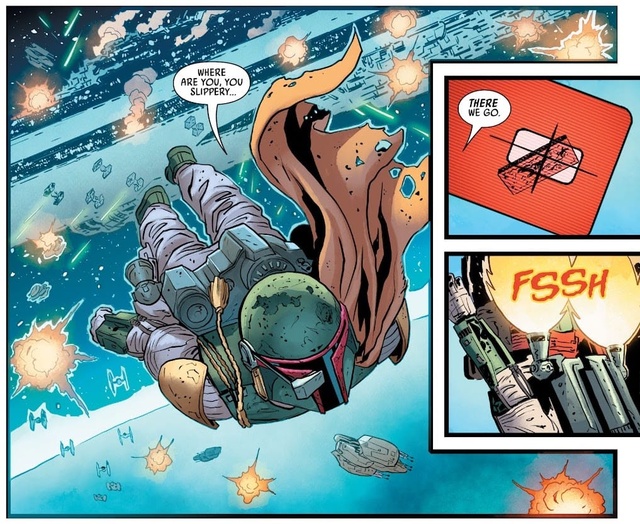 Back to the situation with Han: Han’s carbonite block drops out of the Star Destroyer and free falls from space down to the planet’s atmosphere. It is as stupid and absurd as it sounds. It literally falls OUT of the Star Destroyer, during a space battle, and DOWN into the SKY. Boba Fett flies out with the jetpack, chases it for MILES, and catches it with his whipcord when it splashes into the ocean. It’s hard to adequately describe how flat out stupid this is. And to think that these events are “canon.” Laughable. 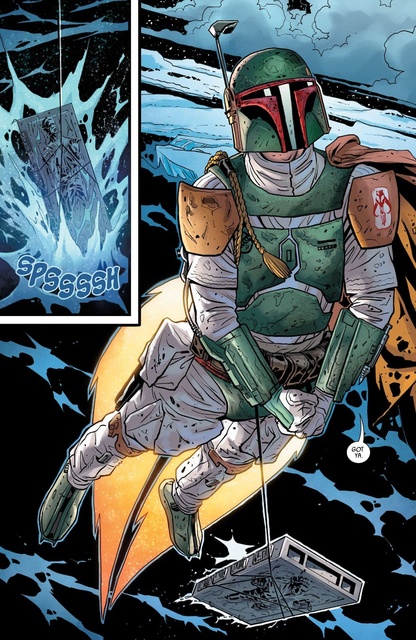 The last part is a conclusion narrated by Qi’ra. We see Leia crying over the failure to save Han. We see the aftermath of Vader’s onslaught, with the Hutt Council dead. We see a critically wounded Beilert Valance who “might serve the Dawn.” She finishes with “The Dawn has come. Now, the real work begins. Await the reign.” It turns out that she was saying all of this… to the Knights of Ren, being led by none other than Ren himself. No, not Kylo Ren. Ren is the original leader of these knights, and wields an unstable red lightsaber. He is the person who Kylo Ren inherited his mantle from. In other words, this would have been a groundbreaking revelation. But there are two reasons it’s not: one, this comic series sucked and, two, the sequel trilogy era also sucks and is essentially a dead end, in almost every way. Nothing that happens with Ren and his Knights will change that.

We get an epilogue where we see Boba delivering Han to Jabba, a moment that has been imagined countless times, by countless fans. This conversation is also lame and forgettable. Boba is sour about Jabba putting a bounty on him, but Jabba brushes it off. He also says Jabba should throw Han into the Sarlacc, a bit of foreshadowing that is too much on the nose. Jabba asks Boba to stick around — not because of the Rebels, but because of Crimson Dawn. It is laughable to hear this since we know it is the Rebel Alliance that Jabba should be worried about. But whatever, Boba asks Jabba to pay him and the “main” mini series of “War of the Bounty Hunters” finally ends.

By the way, all of this was nothing but an advertisement for an “epic trilogy” revolving around Crimson Dawn. 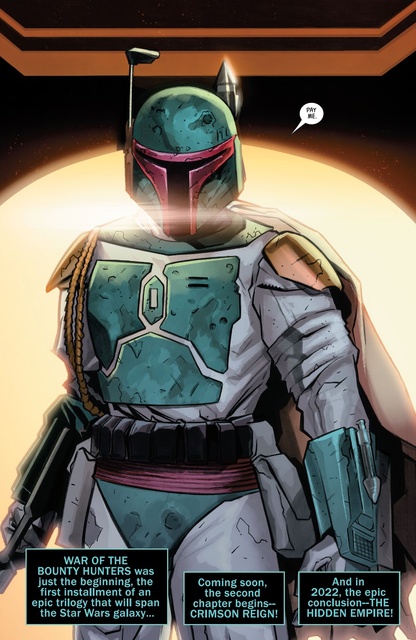 Overall, this is a mediocre ending at best to a terrible comic run. What else can I even say at this point? The plot alternated mostly between boring and stupid, with a few awesome moments sparingly sprinkled in. I’m just grateful that Boba Fett won’t be involved in the rest of the Crimson Dawn arc. Legendary characters like him should be left to competent storytellers. These comics make me grateful that the likes of Dave Filoni, Jon Favreau, and Robert Rodriguez will be handling “The Book of Boba Fett.” This final sequence was decent — I was close to giving this comic a 3 out of 5. However, the moronic and ridiculous fall of Han Solo from space, through the sky, and down to the ocean brings the issue down to a 2.

Do I recommend this series? If you like high quality storytelling, then no. If you like laughable, cheesy, childish stunts, then yes, this is the series for you!