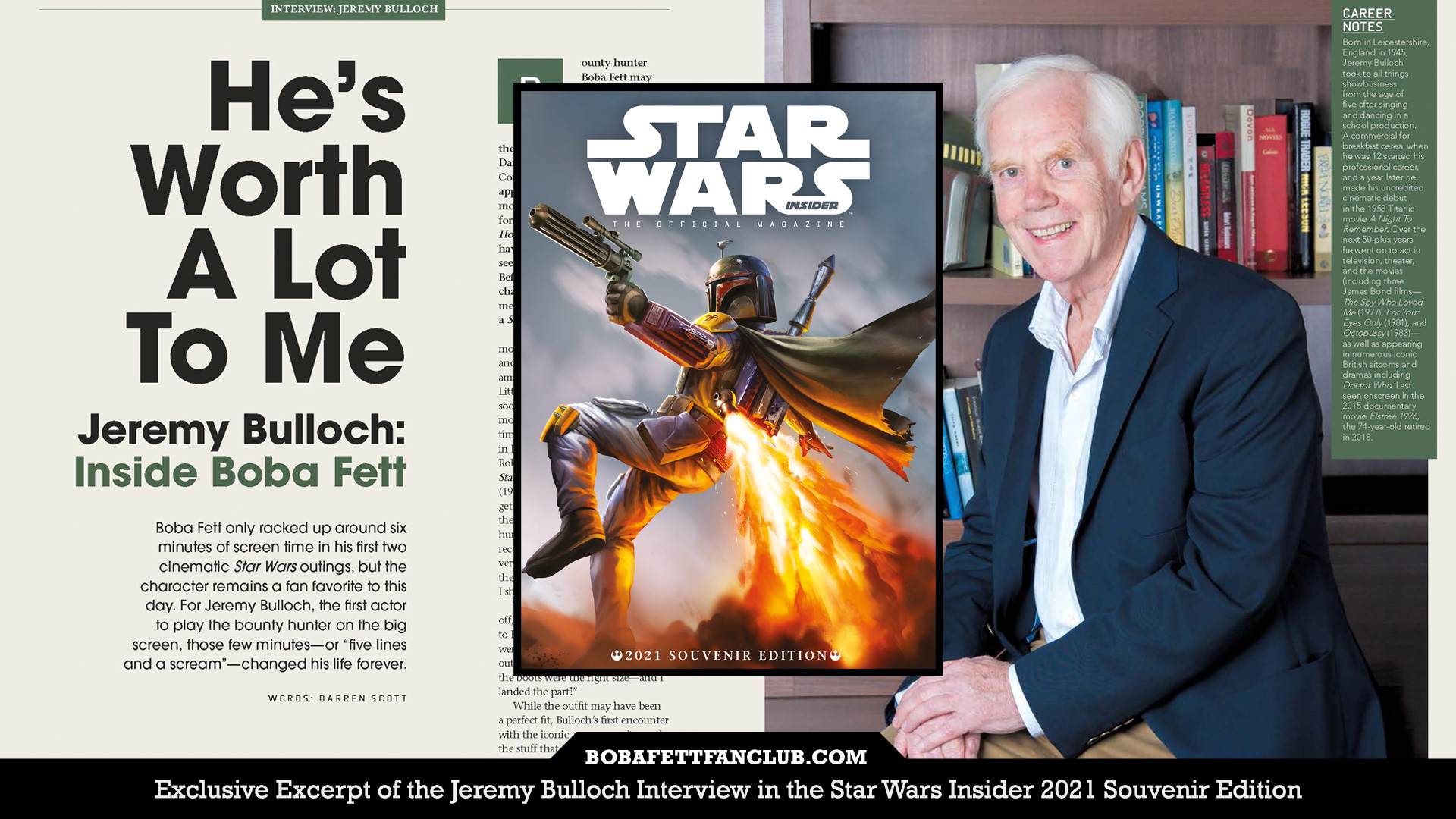 Titan, the publisher of the Star Wars Insider, has graciously given us the exclusive to publish the following extract from their brand-new Jeremy Bulloch interview from the Star Wars Insider 2021 Souvenir Edition, which is now available in the U.S./Canada, U.K./Europe, and rest of the world.

In an bittersweet coincidence, the Star Wars Insider was already planning this feature interview with the original actor to play Boba Fett before he passed away on December 17th. Along with an incredible Boba Fett cover, both on the newsstand edition (shown above) but also the Previews edition, you’ll want to get this issue for your collection.

Bounty Hunter Boba Fett may have made his public debut on September 24 1978, when the character marched alongside Darth Vader in the San Anselmo County Fair Parade, and first appeared on screen almost two months later – albeit in animated form – as part of TV Star Wars Holiday Special, but fans would have to wait until May 1980 to see Boba Fett on the big screen. Before securing the part, the actor charged with playing the armored mercenary was, himself, already a Star Wars fan.

“I did see the original Star Wars movie with my two young sons, and thought it was something quite amazing,” says Jeremy Bulloch. Little did he know that he would soon become part of one of the most celebrated film franchises of all time. “I was working in the theater in London when my half-brother, Robert Watts – the co-producer on Star Wars: The Empire Strikes Back (1980) – rang me and suggested I get my agent onto Lucasfilm as there was a small part of a bounty hunter that was being cast,” Bulloch recalls. “I explained it would be very difficult as I was working in the theater, but he suggested that I should, ‘Just give it a go.’”

Watt’s gentle persuasion paid off, and Bulloch made the journey to Elstree Studios in London. “I went along and was dressed in the outfit, which fitted perfectly – even the boots were the right size – and I landed the part!”

While the outfit might have been a perfect fit, Bulloch’s first encounter with the iconic armor wasn’t exactly the stuff that legendary cinematic memories are made of. When faced with his Fett ensemble, he recalls with laughter that his initial reaction was, “My goodness – how do I get into that?” Donning the costume required “the help of several dressers,” but the actor admits that when he finally got suited up, he was “astonished at how cool I looked.”

With the small matter of Fett’s accoutrements sorted, the time finally came for Bulloch to bring his character to life and he began filming his scenes for The Empire Strikes Back. “I remember the early mornings, arriving at Elstree Studios to get into the outfit, and the first time I walked onto the set as Boba Fett, everyone just stopped what they were doing to gaze at the costume,” the actor recalls.

However cool the costume looked, it still presented several problems for the actor inside. “The helmet tended to steam up, which seriously affected my vision walking around the set,” Bulloch says of wearing the suit in action. “And the backpack was very heavy. It became quite uncomfortable after wearing it for some time, but Boba never complained!” It was these issues with the practicality of the costume which led to one of his most famous on-screen bloopers. “I trod on Darth Vader’s cape due to poor vision, and we both nearly fell on the floor. I think they edited that out,” he chuckles at the memory.

Despite the role being small, Bulloch wasn’t the only person to play Boba Fett during filming. “John Morton stepped in for me once because I was also appearing every night in the theater in London’s West End, so therefore had to leave the studio in good time every afternoon,” he explains. “That particular day they were running a bit late for the scene with Darth Vader, Boba, and Lando, so John filled in. Obviously, the stunt men stepped in for the more dangerous scenes.”

Such was the popularity of the bounty hunter that he also appeared in Star Wars: Return of the Jedi (1983), with Bulloch happy to wear the mask once more. Fondly recalling his time on the shoot, he reveals that it was the scenes in Jabba’s palace that particularly stood out for him, “because of all of the extraordinary characters that were there. I was thrilled to be called back for Return of the Jedi, but not so thrilled to end up in the Sarlacc Pit,” he laughs.

Bulloch didn’t return to reprise the role in the Special Edition of Return of the Jedi, with Don Bies instead taking on the mantle of Boba. Re-casting – and different voices for updates – isn’t something that Bulloch lets bother him, though. “It didn’t worry me at all. It was Jason Wingreen who voiced the Boba Fett character in The Empire Strikes Back and Return of the Jedi, after all” he says.

With various other actors having stepped into the armor, voiced the character, or played an earlier incarnation of the notorious bounty hunter over the years, there’s now an extended Boba Fett family that Bulloch is very happy to be a part of. “I get thanks from Daniel Logan for portraying the character, which indirectly led to him playing Boba as a young boy,” he says of Logan’s role in Star Wars: Attack of the Clones (2002). “Temuera Morrison, likewise considers that his character, Jango Fett, came about because of the popularity of Boba. On the rare occasions we have gotten together at conventions, we marvel at the fact that Boba Fett played such a small role in the films but became so iconic.”

Read the rest of the interview in the Star Wars Insider 2021 Souvenir Edition to learn about his early convention experiences, and to discover how he returned to the saga!

The issue is available to order online in the U.S./Canada, U.K./Europe, and rest of the world. 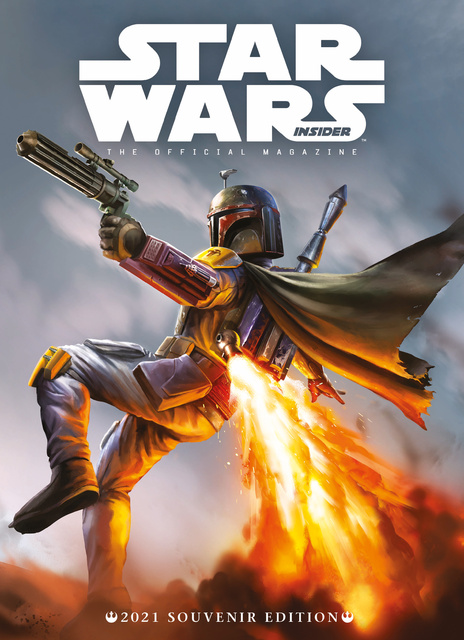 The Previews exclusive is a little harder to track down. 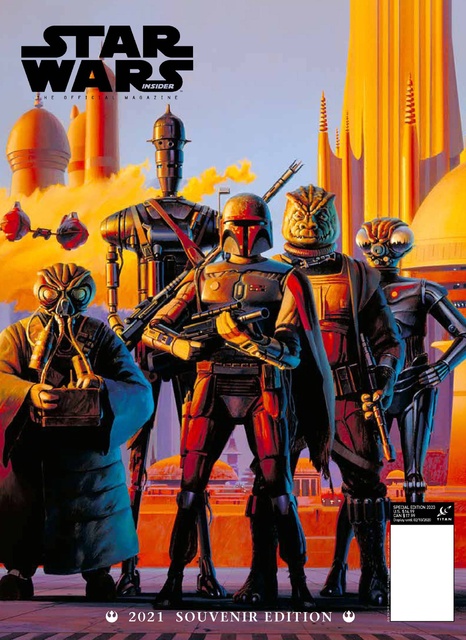