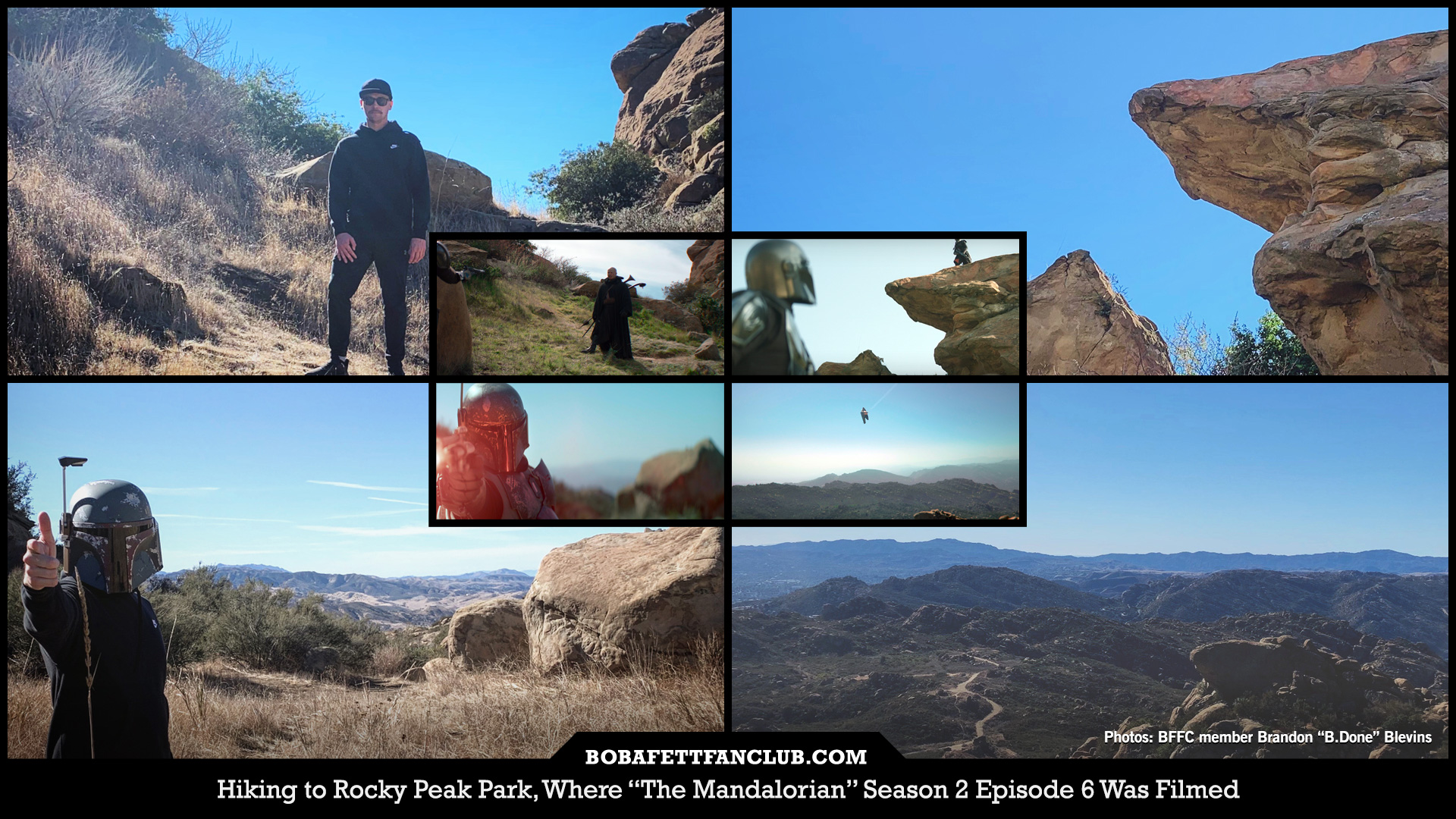 Hiking to Rocky Peak Park, Where "The Mandalorian" Season 2 Episode 6 Was Filmed

You can stand exactly where Boba Fett stood if you stop by for a short hike in Simi Valley, California.

BFFC member Brandon “B.Done” Blevins shared with us some of his detective work, finding the exact filming location of where Boba Fett (Temuera Morrison) finally confronted Din Djarin (Pedro Pascal) in “The Mandalorian.” It’s also not a huge secret — others have found and shared the location by now, too. (As of 2022, there’s also a handy Google Maps with all Star Wars filming locations pinpointed.) But this is uniquely from a Fett fan’s perspective.

First, you’ll want to look up the Rocky Peak Summit Trail on All Trails, Google Maps, Modern Hiker or your preferred hiking site. It’s by the 118 freeway, which has a Rocky Peak Road exit.

There are about six parking spots at the base of the trailhead. Note the “no parking” signs. You can also park across the bridge on the other side of the freeway overpass. For the majority of this, you’ll be walking on a fire road and the main path. Don’t forget to carry water and have some good shoes on. Depending on the season, you might want long pants to avoid some prickly plants just off the trail.

Note that, for all of the comparison shots, the lens and camera height will not match perfectly, but you can definitely line up the geography. Also, official Star Wars productions love to employ visual effects to add this and remove that too. 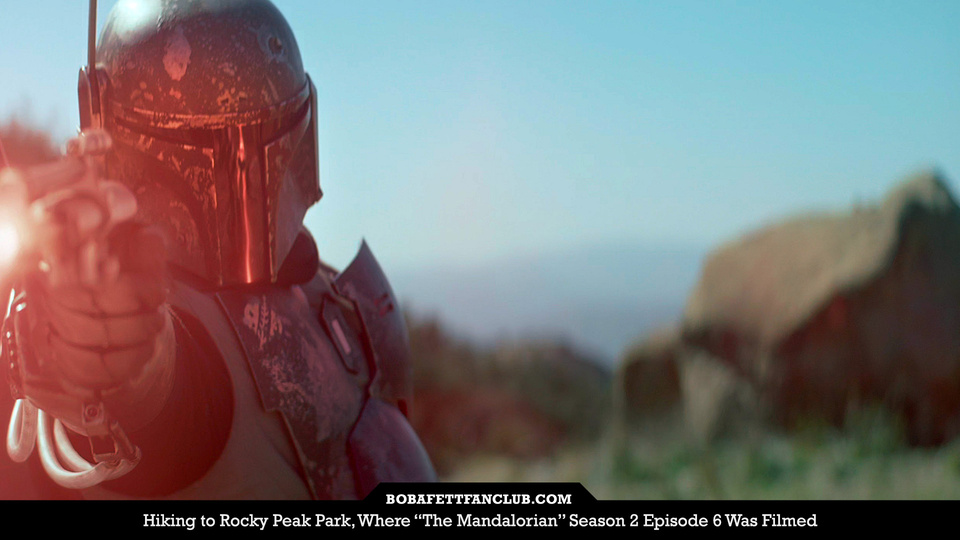 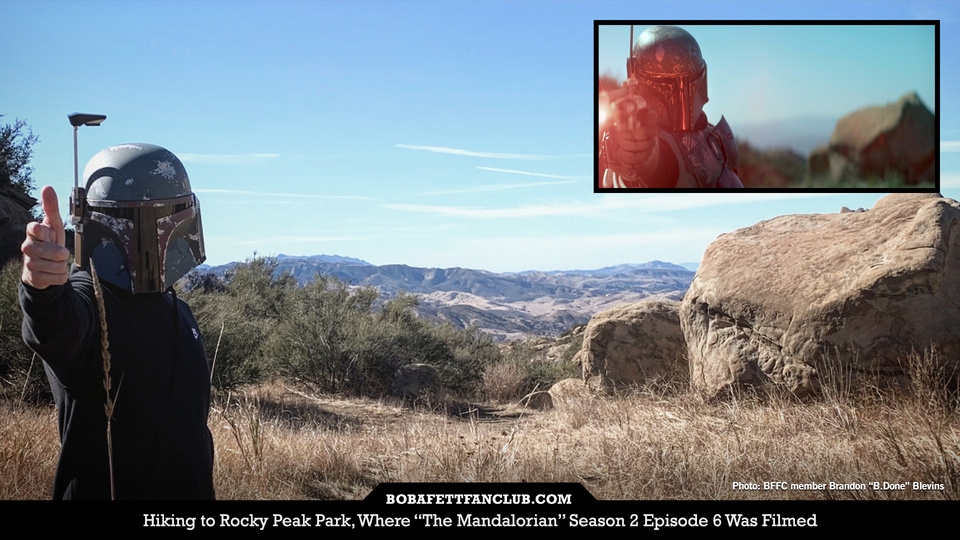 For the Boba Fett filming locations, they shot either right next to the main trail, which is a fire road sized path, or they’re just off to the side, as if to be away from prying eyes during the production.

“It’s actually only about a mile in,” notes Blevins. Normally the hike is 4.6 miles out and back, so depending on how much time you’ve got, you have options. For these photos, you’ll want to head toward Oven Mitt Rock, which you can find on the Google Maps version to the right after a little ways in.

Note that if you get all the way to the base of Oven Mitt Rock, you’ve gone too far: turn around and on the left you’ll find the rock where sniper Fennec is perched and where Boba Fett first confronts Din Djarin to ask for his armor back. (If you didn’t reach Oven Mitt Rock exactly, it’s on the right from hiking up from the lot.) 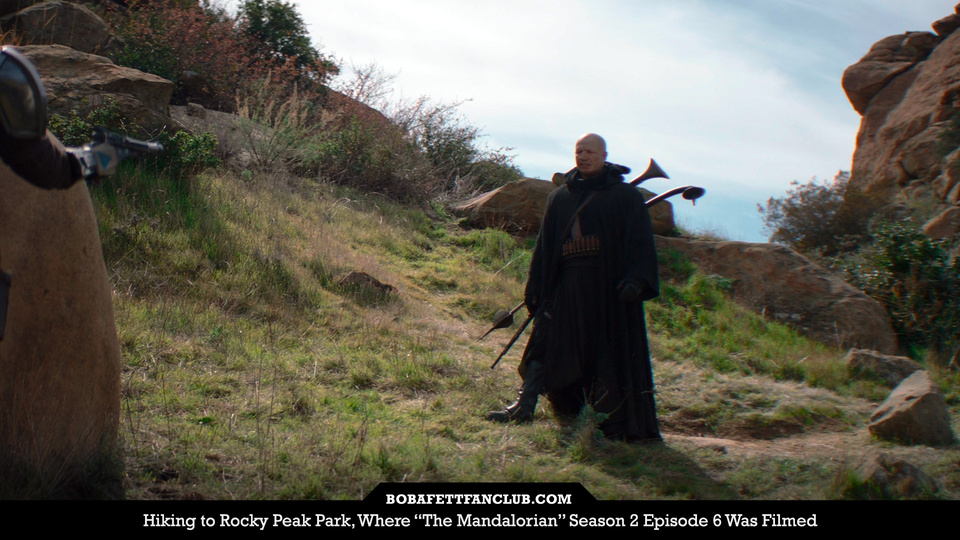 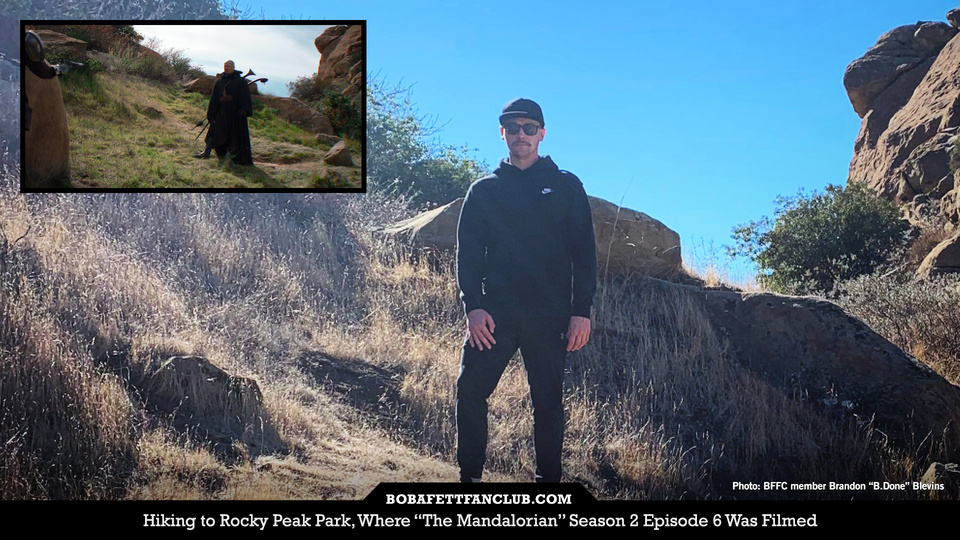 “You begin to go between a small crevasse between two small peaks and it’s on the right. You have to see where Fennec Shand was scoping on the ridge.” 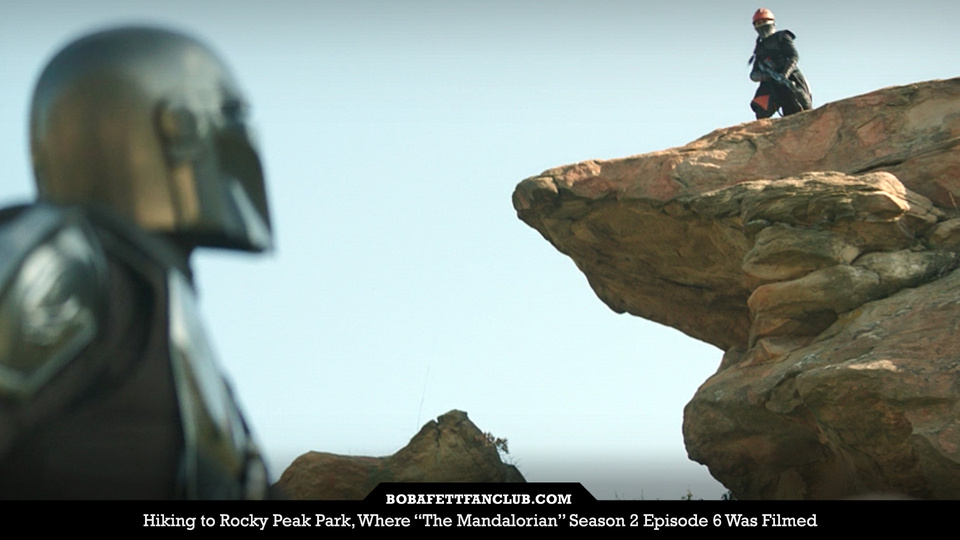 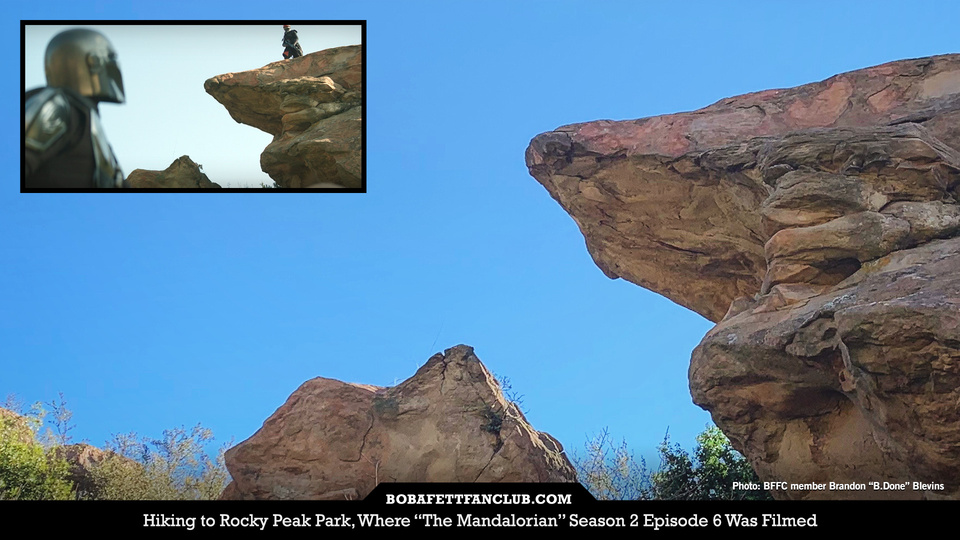 This is the only “off road” part. There’s a gentle slope where they surely hauled film equipment up, just to the right of Fennec’s rock. Walk about 50 feet and you’ll come up and down a small hill to find the big open space where most of the armored battle happens. 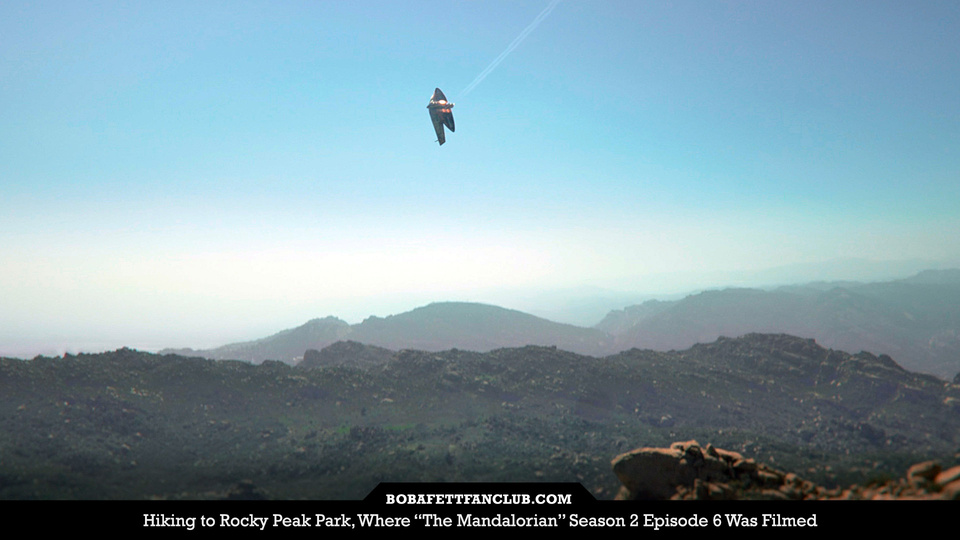 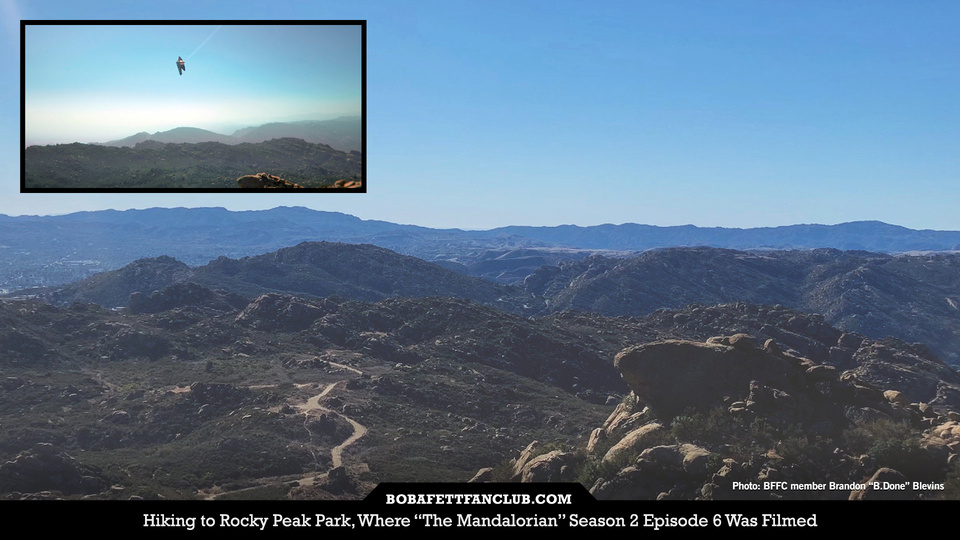 Rocky Peak Park is free and open to the public. It’s part of the Santa Monica Mountains Conservancy in cooperation with the Mountain Recreation and Conservation Authority and the Rancho Simi Recreation and Park District. Be sure to follow all signs, especially for parking. It also goes without saying: please be respectful of nature.

Add a comment below if you decide to make it out there and have any more tips to add. Enjoy and happy trails to you!