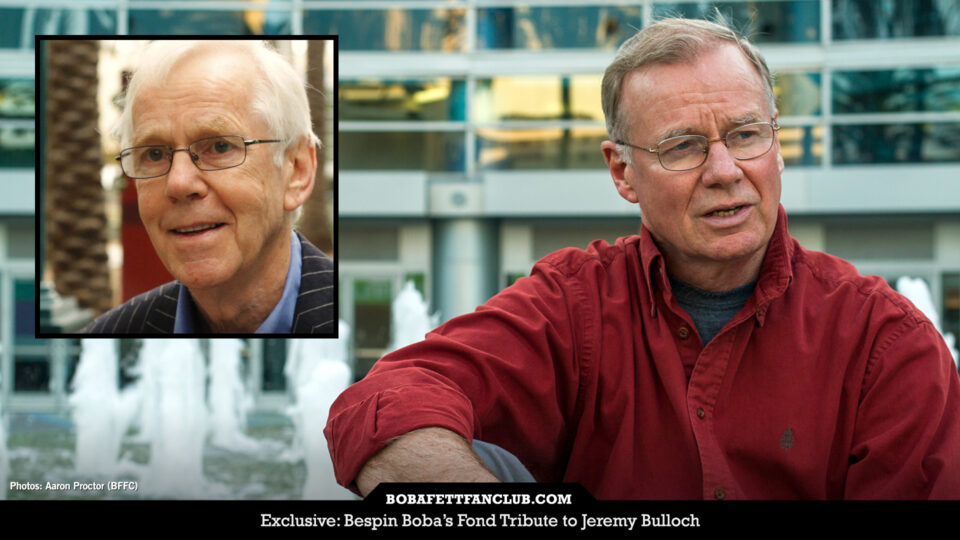 Jeremy Bulloch. When I asked my wife Gail what most struck her about Jeremy, she said it was the way he looked one straight in the eye and listened. That he treated everyone as a person with something to say that he wanted to hear. That he was a true gent.

When I read comments, gentleman is the term most applied to him. Isn’t it counter-intuitive that the cool menace associated with Boba Fett was conveyed so convincingly by an actor whom everyone has regarded as a gentleman?

When I think of Jeremy as Fett, I am often reminded of Kyuzo in Kurosawa’s masterful The Seven Samurai. One particular scene brings to mind the guidance that Jeremy gave to me, when I covered for him to play the “he’s-no-good-to-me-dead” scene in The Empire Strikes Back. Kyuzo is leaning against a forest tree, absolutely still, meditative, as he and another await to ambush several bandits. When they come around the tree, behind him, Kyuzo stands, draws his sword and swiftly attacks with precise and lethal economy. Kurosawa’s character was very much in keeping with Jeremy. Not a man who struts with braggadocio, as is the manner of some warriors. Rather a thoughtful, respectful soul who, when called to battle as a warrior, rises to the moment and does what has to be done with dispatch and efficiency.

One of Jeremy’s favorite anecdotes about Boba was the first day he walked onto the set in costume to be presented (in between shooting during a set-up) to George for final approval of Joe Johnston’s design. Jeremy said that as each of the crew saw Boba coming, he or she stopped and watched him pass in awe. He attributed Boba’s appeal to the impact of Joe’s costume design. To be sure, Boba has been variously ranked as the fourth most popular Star Wars character. And Joe’s design has inspired artwork worldwide. Both Jeremy and I have acquired numerous pieces that are really quite exquisite renditions and interpretations by artists and illustrators from many cultures.

But I have always maintained that Jeremy was the one who gave soul to Boba Fett. His words to me when I stepped in for him were exactly these: “Think Clint Eastwood. A Fist Full Of Dollars. Play everything slow and menacing.” (Editor’s Note: see “Becoming Boba: Coming to Terms with an Alter Ego” on StarWars.com, written by John Morton.). Jeremy thought out his part with the deliberateness of a trained stage actor. His dialogue would not be his. His instrument would not be his voice. Masked, neither would his facial expressions. His instrument would be solely his body. Boba came to life with Jeremy’s movement and his gesturers. And as an accomplished actor, Jeremy put Boba’s spirit into the minutest of moments, as great British actors do so very well. These gestures weren’t tossed away without thought. No, they were crafted aforethought. This sort of detailed attention is still present in Star Wars today. I’m thinking specifically of the creature effects work of Paul Kasey, who is a trainer dancer and most accomplished movement artiste. Jeremy and Paul’s work is not to be seen as random. They were and are high art, though often overlooked by a public.

And Jeremy’s art did not end there. I have signed thousands upon thousands of Boba Fett images, and Jeremy’s autograph is usually there as a calligrapher’s exquisite work of art. The precision he applied to his acting, he applied to his signature. Jeremy once told me that a grammar school master told him something like, “Bulloch, you are certainly not a student, but you do have a good hand.” Or words to that effect. I can tell you, in all those thousands of autographs, I NEVER saw a sloppy “Jeremy Bulloch.” Not reliant on convention-issued Sharpies, Jeremy traveled with his own selection of pens, in a variety of colors with a variety of inks, including metallics, and a variety of points. I’d say his table would have a selection of some 30 to accommodate any surface or taste.

Frequently, I, Dickey Beer, Daniel Logan and sometimes the late Alan Harris would appear altogether, packaged as the Fetts; so I witnessed Jeremy in action at conventions scores of times over the years in America, the UK and Europe. With Jeremy was his lovely wife Maureen, who was always there to manage the table with or without an assigned assistant. While the rest of us Fetts always had a fair share of fans steadily coming forth to meet us, Jeremy dealt with lines that were usually 20 deep throughout a con.

Now, Jeremy’s MO, with Maureen at the table, was to stand in front of the table with the fans where he would greet and chat. I thought this approach was absolutely great. It put one with the fans on an even footing as one of them. A great gesture. So I attempted the same one time. After perhaps half a day, I had to abandon it. Being with fans at a convention table is honestly like giving a performance. Yes, one should be himself or herself, but one has to be what the fans expect, which is entertaining. After all, we are there for them. I found that I couldn’t somehow manage all the inputs and stimuli on the fan side of the table. I couldn’t keep a focus, and it was exhausting. But Jeremy could manage to do all that with consummate grace, effortlessly. Mind you, when he was done, he and Maureen would retire to themselves to recharge their batteries for the next day.

As a couple, they had their priorities right. The convention circuit took them around the world. For years, they structured the faraway trips to allow them time to explore countries and cultures. They were a couple that got it right the first time and stayed together to enjoy for decades their house in Tooting, South London, their children and grandchildren. More often than not, my conversations with both were about family.

Jeremy extended that family to our shared Fett family and extended Fett family of Mandalorians and Star Wars fans generally. As all know, in his Tooting home he had a large collection of Boba memorabilia collected over the years. Some years ago, when I still accepted unsolicited fan letters, I allowed that I had saved every letter in a trove that perhaps numbered in the hundreds. Jeremy said that he too had saved each and every one. Except in his case, it was well into the thousands.

Jeremy will ever be beloved. When the legacy of Star Wars was only kept alive in books and such by Tim Zahn, Mike Stackpole and others in the 80s and early 90s, it was Jeremy, Kenny Baker, David Prowse, Peter Mayhew, Warwick Davis and Michael Carter that took to the road with the “Men Behind the Mask” tours that gave life to the legacy and knitted together the people of the worldwide fan base until the re-releases and Episode One finally reignited the flame that still burns bright today.

Jeremy, God bless. Bespin Boba salutes you. For you indeed were one gentleman who truly gentled our condition.

John appeared as Dak, Luke Skywalker’s back-seater in the Battle of Hoth in The Empire Strikes Back. He also appeared in the film substituting for Jeremy Bulloch as Boba Fett on Bespin, when Boba utters his famous line to Darth Vader, “He’s no good to me dead.” Follow him on Twitter @tapcaf. His original music track, “Boba’s ‘Greedo’ Demo,” can also be found exclusively here on BFFC.