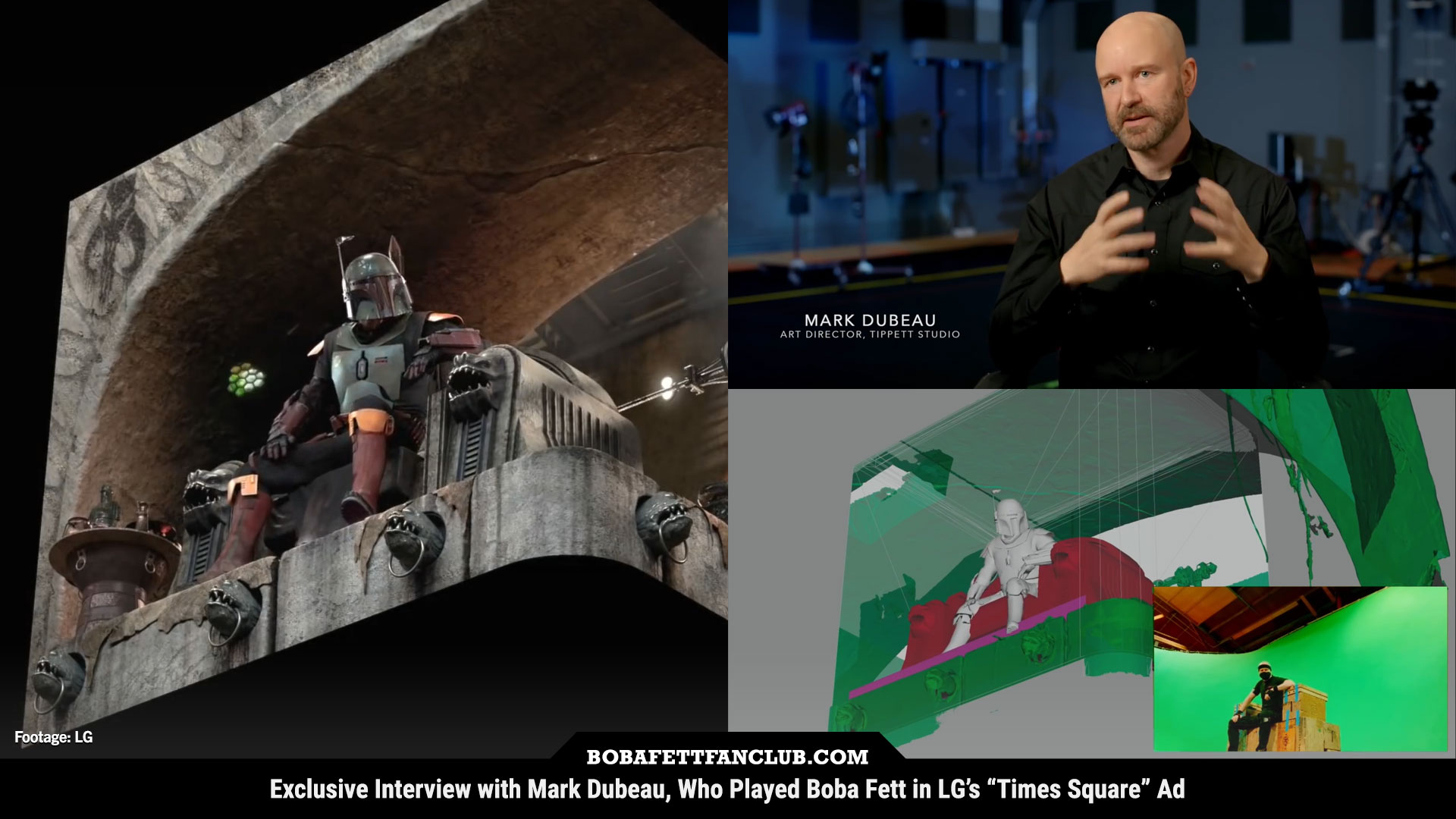 If you looked up while in Times Square in New York City in April 2022, you may have caught a glimpse of Boba Fett as the Daimyo of Tatooine on his rancor-decorated throne. The super high definition video was part of a collaboration between ILM and LG Display to show off LG’s OLED billboard in Midtown Manhattan. 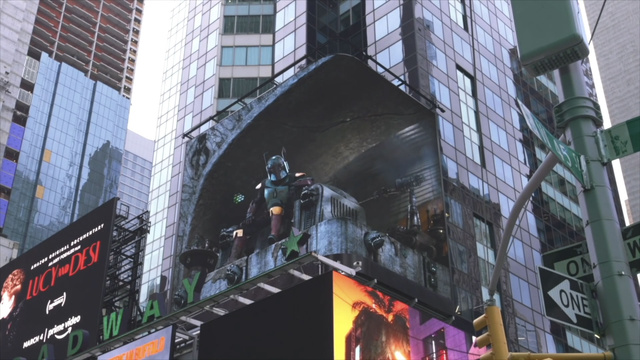 But it wasn’t Temuera Morrison under the helmet this time. That honor went to Mark Dubeau, senior art director at Tippett Studio, who donned motion capture (mocap) gear and acted out the role of Boba Fett on an improvised throne of apple boxes in front of a green screen.

We chatted with Dubeau to get insight into why he volunteered for the role and what it was like to see himself as the iconic Boba Fett.

Boba Fett Fan Club: What is your role at Tippett Studios?

Mark Dubeau: I’m the senior art director at Tippett and do most of the concept art here. I also manage and design our stop motion puppets that we have used on Star Wars projects such as The Mandalorian.

BFFC: What made you want to volunteer to do some of the motion capture for the LG billboard?

MD: I had done a wee bit of acting in the past, and because I’d spent some time in and around mocap in the visual effects industry, I just… volunteered. 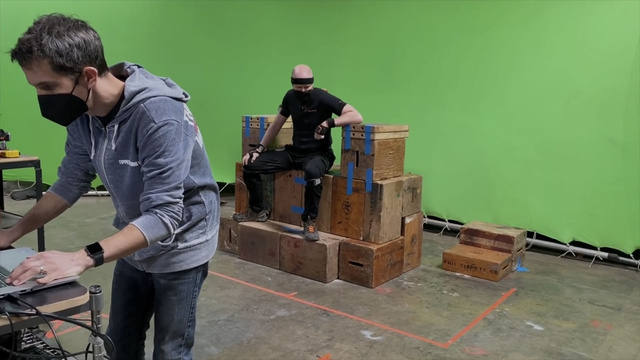 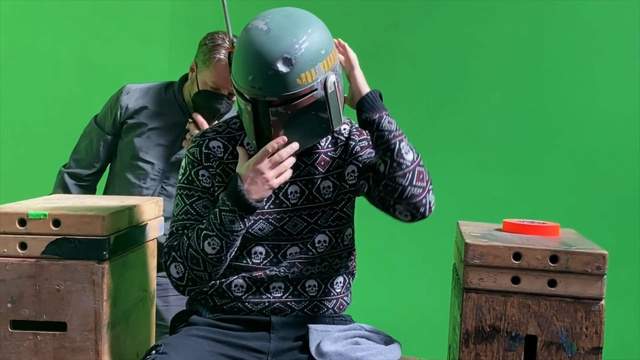 BFFC: Did you do anything specific to prepare for your role?

MD: I spent a lot of time watching pretty much anything with Boba in it, and was striving to convey not only the ‘new’ performance from Mr. Morrison, but also how we perceive him in the initial films. He has a way of surveying the world around him, it’s unhurried and very chill. You feel quiet menace. He’s got a bit of swagger.

BFFC: What was the process of doing the mocap for the Times Square billboard like?

MD: The process starts with squeezing into a very tight vest and having markers placed in select spots on the body. There was a set built with apple boxes that approximated his throne, the steps, everything he’s meant to interact with. Once the markers were on me and they were calibrated and dialed in, I went over the ‘theater’ of the shot with the VFX supervisor, in this case, Chris Morley (affectionately named CMO), and I ran various takes, doing different movements. The idea was he was surveying his domain, so I needed to look out in a sort of regal manner, unrushed. It’s a bit tricky as you have a finite amount of time but have to perform in an un-rushed way. Later we chose the best variant and proposed it. I was more than happy to be involved.

BFFC: What was it like seeing Boba Fett matching your movements in the finished piece?

MD: It was a bit surreal seeing myself as Boba Fett, once the mocap was applied. One thing I’d like to point out is mocap is great for performances, BUT it’s always combined with the hard work of an animation team. There’s a lot of work that needs to happen. A lot of the extremities, fingers, etc., needs to be hit by animators… but often they tweak the performance as well, just massaging it into the best possible fusion of the two worlds. They are just as integral to the process. After the fact, sometimes we get performance notes and they have to go in and tweak. They’ll speed things up, turn the head a tad more, etc. But I still ‘see’ myself in there. I’ll never be one to say, “That’s all me.” I’d love to perform Boba again. Maybe Lucasfilm will call! Ha! 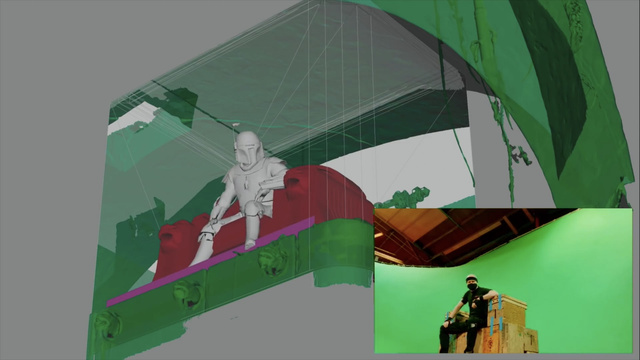 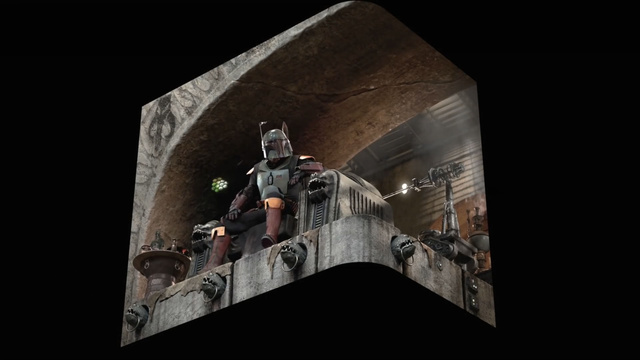 BFFC: Did you ever get a chance to check out your work in Times Square?

MD: I’ve only seen the billboard online, not in person. I performed as Vader for the “Obi-Wan” billboard as well… and didn’t get to see that in person either!

BFFC: Do you have a favorite Boba Fett moment?

MD: It’s funny, my favorite Boba moment is a subtle one, from “Empire,” where he just glares and nods. There’s a lot of implied menace there… potential. At the time, I was a kid when I saw that, and thought, “Who’s THIS guy, he’s so cool.” Well, he’s STILL cool, all these years later.