My name is JC, I go by JC Fett and cosplay Boba Fett. Only a handful of select people know my true identity, mainly fellow Mando brothers and sisters. 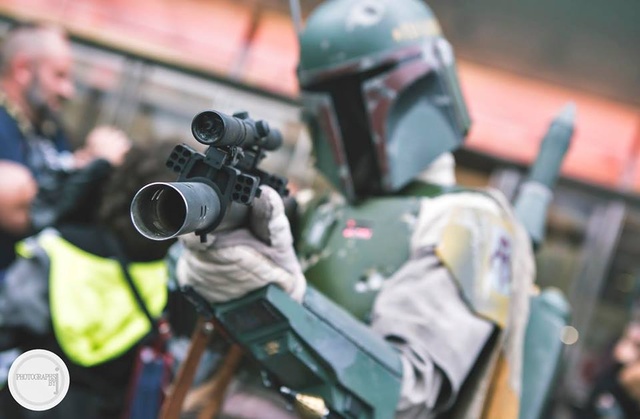 I try to take “being” Boba Fett to the next Level. I feel those who fell in love with Star Wars through the original trilogy as I did, would agree the mysteriousness of Boba was one of his strongest qualities. Just who is this expressionless Bounty Hunter? Taking off the helmet and revealing myself completely ruins this. If you look at my Instagram feed you’ll see… never a shot of who I am.

I’ll go all day with my helmet on at a convention. This past NYCC I arrived at 7am for the East Coast Cosplay Championship and was there until almost midnight when winners were announced — took first place in TV & Movies category btw! — and I only took my helmet off for like 20 minutes in a discrete location to eat a hot dog, macaroni and cheese and some soda. Haha. 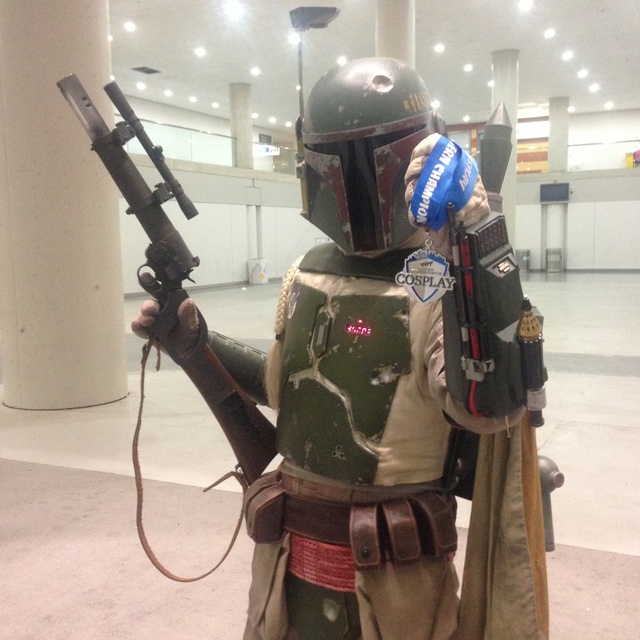 I have to thank big time my wife — she cosplays a female mandalorian by the name “La Fett” — and my buddy Geo who accompanies me and helps support me on these troops! I think a fellow TDH member said it best… people always ask questions like.. “Don’t you get hot? Don’t you have to pee? Aren’t you hungry?” But the truth is once you put the armor on and the helmet is on YOU ARE Boba Fett, and Boba Fett doesn’t need to do those things. He is just Boba Fett.

I go by “JCFETT” on all the sites I’m at, my first forum I registered at was TDH. It’s the most knowledgeable and helpful Fett fan site there is. I’m on a few other sites as well, like therpf.com, which is a great costuming/props site that encompasses everything and they have some tremendous builders on there.

I also run my own social media pages — instagram.com/jcfett and facebook.com/jcxfett (had to add the x since jcfett was taken!).

Currently I’m not “in” any professional costuming group, but I do get some contracts from and troop along with the 501st ECG and the Falco Clan of the Mando Mercs. I have a lot of awesome friends in both and would highly recommend either or both to anyone interested in organized Star Wars trooping. I’ll be joining the ranks soon myself. 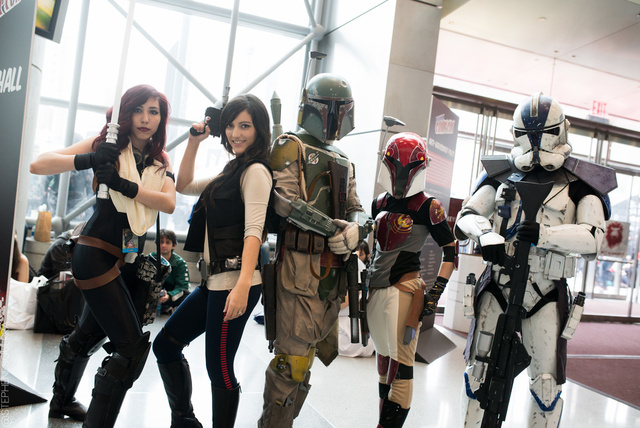 My big brother raised me like his apprentice on Star Wars. He grew up in the 70’s, and I’m an 80’s baby so I was early on influenced by his enthusiasm for it and his huge original vintage collection. He basically had everything. So for a boy growing up around speeder bikes, the Millennium Falcon, X-Wing fighters, etc., it would be impossible not to be fascinated and completely immersed in this magical universe.

Many years later, we continued to collect when the figures and movies re-released, played a lot of Pod Racing on N64 etc and one day he turned to me and was like… Bro, we should build life size Stormtroopers. I was like yeah dude of course. That makes complete sense. And so we did.

We ordered some kits off the internet and spent a few long winter months in our basement building some awesome stormies. We trooped around town and for Halloween, just local stuff. For my small town on Long Island, New York, the response was tremendous. Kids to grown ups treated us like superstars and were so excited to see us walking around bothering Traffic Control Officers etc. That was like 2005, and that’s when JC the cosplayer was born.

It’s hard not to enjoy how much people enjoy your cosplay. The huge smiles, people are just so happy. It’s hard to describe. It wasn’t long before I decided to tackle my favorite character in the universe, Boba Fett, I registered on TDH, received a warm welcoming — some which came along with warnings haha — but I knew the road wouldn’t be easy and I wouldn’t have wanted it any other way.

After a few years and lots of help from amazing talents such as Christian from Man of War Studios and Lou Darth Vorhees of Fettwerks, JC Fett was created. My cosplay Fett was initially finished by 2008, though even today I’m upgrading and adding cool new features, but it wasn’t until New York Comic Con 2012 that I made my con debut. It was one of the most amazing experiences and continues to be. I love the NYCC atmosphere, it’s a great convention I recommend anyone interested in comics, toys or cosplay to come check it out. I met some really awesome people from there who are now really close friends of mine, and not just from the Star Wars universe, from Marvel cosplayers to Comic and Toy collectors and vendors themselves. It’s a real positive thing, and it’s definitely a passion of mine. To go out and be Boba Fett and bring excitement to people. It’s an honor really. 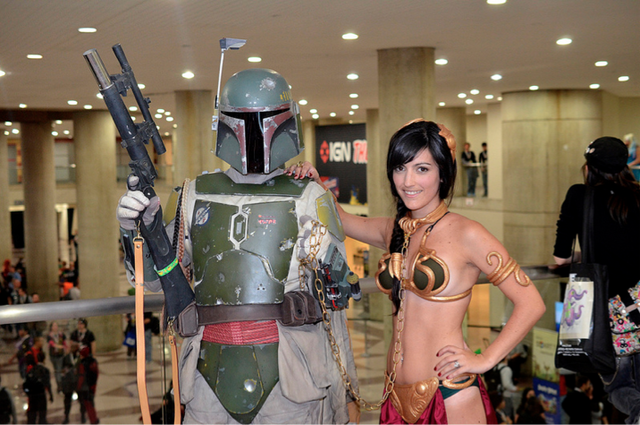 My favorite part of my costume is my helmet. I just love all the details and colors. And I’ve spent a lot of time making the inside as much of a home for my head a possible haha. I have integrated fans and self contained voice amp and speakers inside, as well as the wireless remote activated range finder which always gets people excited! 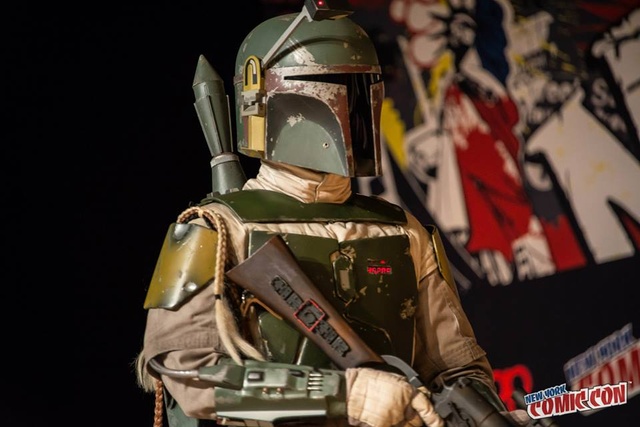 My favorite memory is always changing. I just like when kids come up to me as if I couldn’t possibly be real, but I am. And you can see it in their face, they’ve just teleported to another galaxy. This includes grownups sometimes too, ha!

I think my day to day challenges with the costume itself is the gauntlets. They tend to hurt at the wrist after a while, especially when you’re carrying a heavy EE-3 with real brass grip, metal and wood stock etc. So that’s tough. I lose feeling in my thumbs sometimes. The jetpack also tends to be heavy due to all the components and things I have in it. Other than that I can’t really complain. 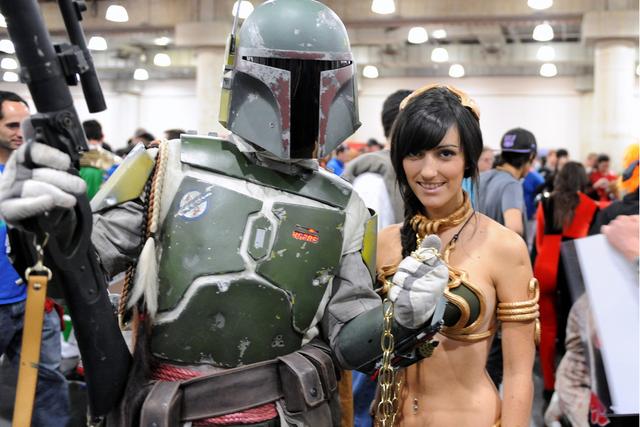 From my time as a Stormtrooper I can say Fett is much more manageable, but there are a lot of pieces to him that can go wrong so if you just do a lot of test fitting and test trooping you should be ok. I’ve had my mishaps of shin tools flying out or my gauntlet hose just dropping off my gauntlet before I learned better ways to fasten them.

HAVE FUN! Do it because it’s something you enjoy! Don’t let other people get you down or hold you back. Cosplay is for everyone and everything. Unleash your creativity and let nothing stop you! Your imagination is limitless. 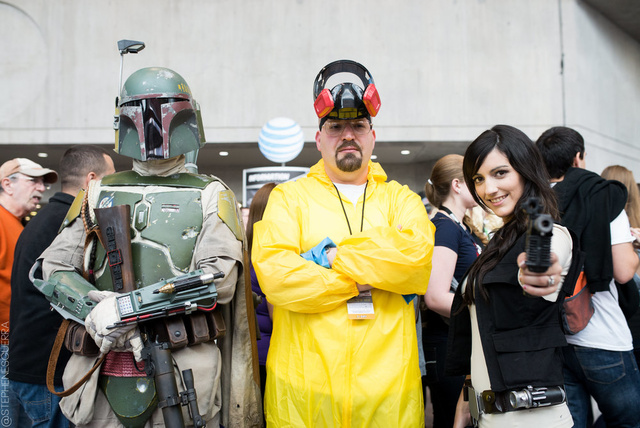 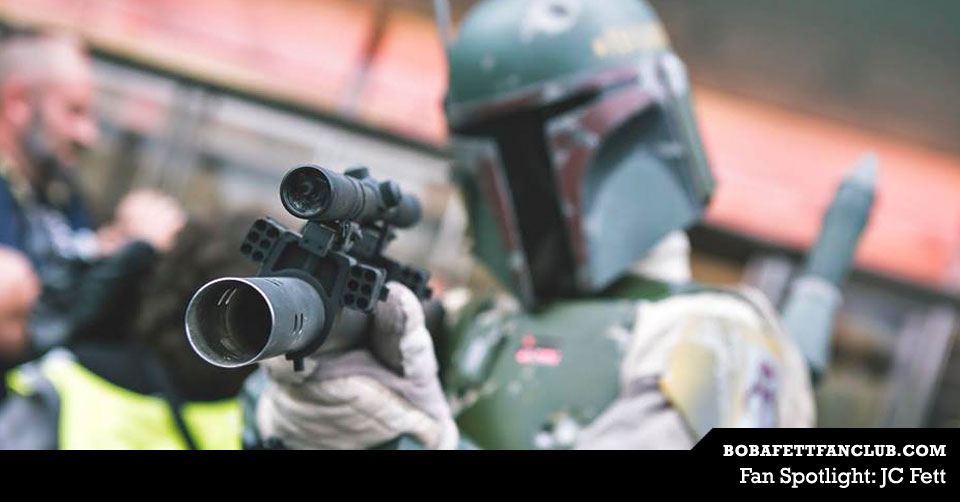