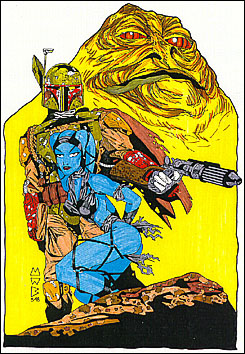 “He’s a ghost, he’s a man, he’s a guru, he’s a God.” I’m sure Nick Cave wasn’t talking about Boba Fett when he wrote “Red Right Hand”, but it fits the character better than anything I’ve heard. There are many misconceptions of the Mandalorian Armour Clad bounty hunter. The foremost being that he is evil. In fact, he is a mercenary. Plain and
simple. He’s neither good, nor evil. He is in it for the money…”Bounty Hunting For Fun And Profit”. I have attempted to explain this to people, but he has embedded himself in the minds of most as “The man who took down Captain Solo”. I heard him referred to as the last man of mystery in the Star Wars Trilogy, and I think that applies.
After all, we’ve seen the Dark Lord himself unmasked and revealed as nothing more than human. The Emperor’s origins have been fully explored in novels and comic books fairly extensively, as is the case with the Emperor’s Royal Guard. So little is know about Boba Fett that we are left wondering just what his story is. We know he is a human-like
creature, whose name is Jaster Mereel, but surely he can’t be human. He’s lived since the Mandalorian Wars, and is still alive to meet Captain Solo’s children in Shards of Alderaan, Diversity Alliance, Delusions of Grandeur, Jedi Bounty, and The Emperor’s Plague. Surely no human could remain in such prime physical shape for such an extended
period of time. Perhaps he’s a droid you say? Unlikely. The whole idea behind Star Wars, as I see it is to bring a message of “Man Will Always Triumph Over Technology”, and having one of the main characters defeated by a droid would defeat the purpose. Also, in a recent interview, writer Kevin J. Anderson told us that he suggested that Boba
Fett would be a droid, which is why he was able to escape the Sarlacc, but George Lucas refused the idea flat out. Perhaps George has a new surprise in store for us in the prequels… perhaps he has another “gift to the fans”, as he did in the special edition of “A New Hope”, but only time will tell. Personally, I hope we are always left guessing.