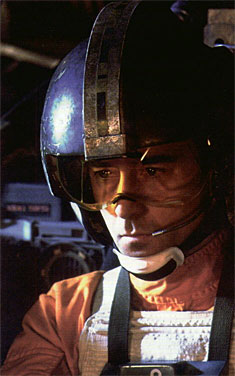 I suppose it’s natural for people to speculate about someone whose past
and origin is as mysterious as that of Boba Fett. As we speak, there’s
someone out there arguing that he’s Han’s mom’s uncle’s estranged
brother. There have got to be at least 20 sites dedicated to discussing
whether he wears boxers or briefs. (Interesting question… Note to self:
Next article–Boba Fett: Boxers or briefs?) There was one particular
site that has some very legitimate points; it’s Joe Carlson’s The Boba Fett Internet Archive. One area of the site, Serious Geeking, is dedicated to fans, such as myself that enjoy frequently asked questions. Some of the ideas I’ve come across lately are
absolutely absurd.

BOBA FETT IS HAN SOLO’S BROTHER. Boba Fett was first noticed on a planet called
Concord Dawn. General Han Solo is a Corellian. That should be enough to
end this discussion, right? Nope. ‘Cause right now there’s someone
reading this saying: “Yeah, but Luke and Leia are from different planets
too!” And that’s absolutely right. Probably the best evidence is that
George Lucas isn’t Jerry Springer, and having Han and Boba Fett as
brothers wouldn’t really serve any other purpose than sensationalism.
All we know is that Boba was accused of being a stormtrooper and Han was formerly an
Imperial officer who stood up for what he believed in. This probably
caused a lot of respect in Fett’s eyes but, from then till the time when the bounty was put on Solo’s head, he had changed that. In addition, in the Holiday Special, where Fett was “helping” Luke, Solo,
and the rest, he was actually trying to capture them for the bounty
from Jabba. R2-D2 and C-3P0 thwarted his plan.

BOBA FETT IS REALLY WEDGE ANTILLES. All right, it’s confession time. I don’t
know that much about Wedge. So it was to the books I went. They told
me a lot about him, but not really anything that could prove or disprove
this one. I believe that all of these rumors will end up like this,
because of Fett’s total lack of a past. So, it all comes down to logic
again. If Fett was Wedge, he had a lot better chances to capture Solo
and his friends that would prove a lot less dangerous to Fett.

BOBA FETT IS A THIRD SKYWALKER. First, there are those who would say,
“Vader or Luke would have felt his presence.” But, didn’t Vader almost
destroy Luke’s X Wing? And all he had to say was “The force is strong
with this one.” If I found out that I had a kid who was destroying the
empire’s greatest weapon, I think I might have a bit more of a reaction.
And Luke spent god knows how long with Leia, and he needed Ben and Yoda
to tell him. Leia says, “Somehow I’ve always known.” is that why you
were making out with him in the infirmary? But Yoda and Ben would have
known. And the Emperor would have known. They’re the strongest with
the force in the Star Wars Universe, and when it comes down to it, it’s
my opinion that the Emperor is the strongest. He would have exploited
that for his own purposes.

Now, I’ve had people come to me and I am, by no means, an expert on
Fett. But they’ve asked some very interesting questions. The best one,
or at least the most interesting to me is the idea that Fett is the last
surviving member of an Imperial cloning experiment, similar to the Nazi’s
Ubermen. The idea came from William Kivlen, and his argument was this:
The possibility of Boba Fett being a clone? After all isn’t he a veteran
of the clone wars? Could Boba Fett be the last surviving member of an
Imperial cloning experiment, something similar to the Nazi’s Ubermen?
Seems to me that would explain the Jedis being nearly extinct from that
war (from possibly almost meeting their match). Also that would explain
his seemingly agelessness (sic), the measure of respect that he receives
from Vader, his close workings with the Hutts, known Jedi killers, and to
me personally, what would a specifically trained special forces soldier
do after the war is over? The hunt must go on.

This is totally possible. Again, from what I’ve read, it can’t be
proved, or disproved.