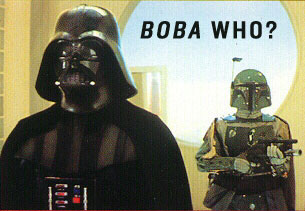 Well, there are two respective definitions of Boba Fett. The first:

In Polish, Boba means “trapper”. Fett is a variation of the English word “fetter”, which means to restrict or confine. This combination seems to describe Boba Fett quite well – his personality and otherwise. He is a bounty hunter that traps people, after all, and his emotions are nothing but restricted and confined – to himself.

Now, the second meaning is more comical. Boba is the Spanish word for “stupid”, while in German, Fett means “greasy, oily, and fat”. Is Boba Fett stupid, fat, oily, and greasy? Hardly.

The former definition seems to more accurately depict our infamous bounty hunter, whether or not Lucas meant for this to translate so precisely, or whether it was just a coincidence, I have no clue.

It’s kind of scary when you take a look at the colossal amount of attention Fett is receiving, mainly because of the comparison between his popularity and his screen time. Now don’t get me wrong – I’m not implying that the key to building a popular character is to give him/her less screen time. The lack of screen time is merely a factor that contributes to Lucas’ unique overall construction of this particular character.

Want me to put that in Laymen’s terms? Ok, let me explain character construction a bit more clearly. There are five types of characters, which I will explain using the slope of a line – the descending line, the ascending line, the straight line, the jagged line, and the dot.

The descending line speaks of a character with a significant role at the beginning of a movie, but who slowly fades away near the end. An example of this would be Grand Moff Tarkin, who goes from being an arrogant bastard to being space dust.

The straight line is a stable character who maintains a fair amount of importance throughout the whole movie. R2D2 is an example – this cute, resourceful, and efficient little machine does not advance too much as far as characterization goes, but maintains an important presence throughout the trilogy.

The jagged line is a character that is built to have an unpredictable and sometimes wild effect on the storyline – in simpler terms, an individual that is useful at times, and useless at other times. Chewbacca is an example of the jagged line character. He’s either helping Han shoot up mynocks, or doing his Wookie barks and being a pain in the arse.

The dot refers to the useless characters that are stuck in the storyline to connect more important lines together. After they serve that purpose, they are deleted. So in A New Hope, Luke’s Uncle Owen plays the role of a “dot” character. He links C3PO, R2D2, and Luke together, then he becomes a flaming heap of flesh. Yup.

Finally, the ascending line. Luke Skywalker is a classic example of the ascending line – we know nothing about this farm boy at the start of the movie, but he gradually develops as a character, and ends up being a Jedi and the son of a Sith Lord. Oops, hope I didn’t spoil that for you. Heh.

Fett is a strange combination of lines – we know little to nothing about him throughout the entire trilogy, even though his role increases with each passing movie. If we tried to draw Boba Fett in a line, we’d probably end up with something that looked like a tornado. That’s the type of character Lucas meant for Fett to be, and he built Fett accordingly. So what is Fett’s character composed of?

He doesn’t give any first impression – just one, cold gaze at the camera in A New Hope. He wears the hardcore armor, with dents and scrapes that tell so many stories – stories that are not even hinted at in the movies. He defies the Dark Lord of the Sith in The Empire Strikes Back. He doesn’t say cheesy one liners – he says very simple one liners. But he says them with a mysterious quality in his voice – just by listening to him speak through his distorted helmet filter, we can tell how cold, emotionless, and calculating he is. It’s not just any mechanized voice, however – not menacing like Vader’s, or prissy like C3PO’s. It’s the voice of someone who no longer has a purpose, but has a mission. His voice is the grim voice of someone who has felt Death’s gentle touch.

Lucas carefully builds Fett so that he’s not just a background character like Greedo, but not a main character like Luke. The camera always focuses on Fett when he’s there. When he’s there. Lucas implies so much about Fett, yet shows so little. He uses Fett almost as a tool to bring attract the interest of fans outside the movies. Which brings us to sites such as this one, to find out more about what Lucas never told us, but wanted us to know about.

I always wondered about Fett’s death. That scream seemed so out of place. Because it sounded so…well, human. There was emotion in that scream, and emotion and Fett are like Pinky and the Brain – they’re always there together, but one just doesn’t belong.

Lucas used the scream to show that there was, in fact, more to learn about Fett – no, he was not just some emotionless freak that went around killing people, there was someone behind that mask. And it was up to us fans to figure out who.

Fett’s death also left the option for us fans to just forget about him. It was all part of the experiment – after all, George didn’t want to leave a mess if the experiment failed. And since you’re reading this article, I think the experiment was a complete success. So successful, in fact, that the next Star Wars movie will have quite a large focus on Fett. Will this ruin Fett’s mysterious qualities? Will a large dose of Fett on the wide screen become a turn off? It’s a possibility, but highly doubtful – I’m just asking these questions cause it’s the media’s job to try to ask pointless questions to make people worry.

Another frequently asked question of me is who’s side Boba Fett is on. Well, let’s take a look. Is he a hero? It’s highly doubtful, since throughout the movie he is seen working against our heros, by capturing Solo and guarding Jabba. So does that make him a bad guy? That seems to be the general consensus of people who do not know Fett too well. I was reading through a Hasbro Star Wars collectibles magazine, and I couldn’t help but smirk when I saw Fett on the villain’s list. That’s not quite right, because its clear that he’s just being hired – he jumps from working for Jabba to working for the Empire. And yes, he is the only person to defy Vader and have his throat in one piece, other than Luke himself. In The Empire Strikes Back, after Boba directly objects against Solo being carbonite frozen, Vader actually listens to Fett and reassures him that he will be “compensated by the Empire” if anything happened to his bounty.

Now, if you are a true Fett fan, you should have already formed the same conclusion that I have formed. Fett is not a good guy, nor is he an antagonist. He is who he is. He is the deadliest bounty hunter in the Star Wars universe. He is Boba Fett.

“I bow to no one and serve only for cause.”
– Boba Fett, The Last One Standing