[Editorial] Not Too Dark 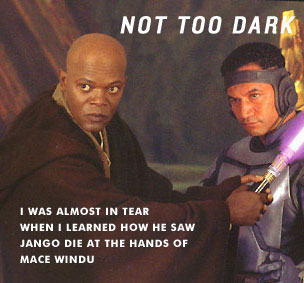 I have been a fan of Boba Fett for a long time. His
past was dark and you had no idea where he came from.
From the looks of him he would give you no hint to his
dark past. I was almost in tear when I learned how he
saw Jango dies at the hands of Mace Windu. I guess it
would have been quicker then in the belly of a
sarlacc. However is Boba Fett as dark as we see him? I
mean you are not looking close enough. The small
details on his armor give away his past. Boba Fett’s
armor looks nothing like Jango’s maybe there is a
reason for this.

My point is Boba Fett has little clues to his dark
past. You may think I took a lot of time to think this
crap up. I assure you I came up with while drawing a
Mandalorian I role-play with. It took me only moment
to figure this out and let me tell you I have a heck
of an imagination. I was just taking the design off
the a Boba Fett action figure.

This is what I came up with. One Boba Fett’s shoulder
pads there is the famous Mandalorian skull. No biggy
right? Think really hard about what that look like.
The Reek, with his huge horns that curl around it
head. I know it missing the horn on the top of his
head but there is what looks like a crack in the
skull. There’s the third horn.

You still don’t believe me that Boba was giving hints
to his past? Fine then. On Boba’s right breast plate
is the a small planet with what looks like a wreath
around it. This small planet is very similar to the
planet Geonosis. The very planet where his father fell
on to the Jedi. The ring around the planet is well the
ring the Slave I about destroyed Obi Wan.

I know, I know. Kind of cheesy. But It’s still a good
theory if you ask me and they do look like the Reek
and Geonosis. I wonder is this was a mistake or if
Lucas did it on purpose? However, I’m going to say
that is a way for Fett to let us know of his dark past
that’s not so dark any more.