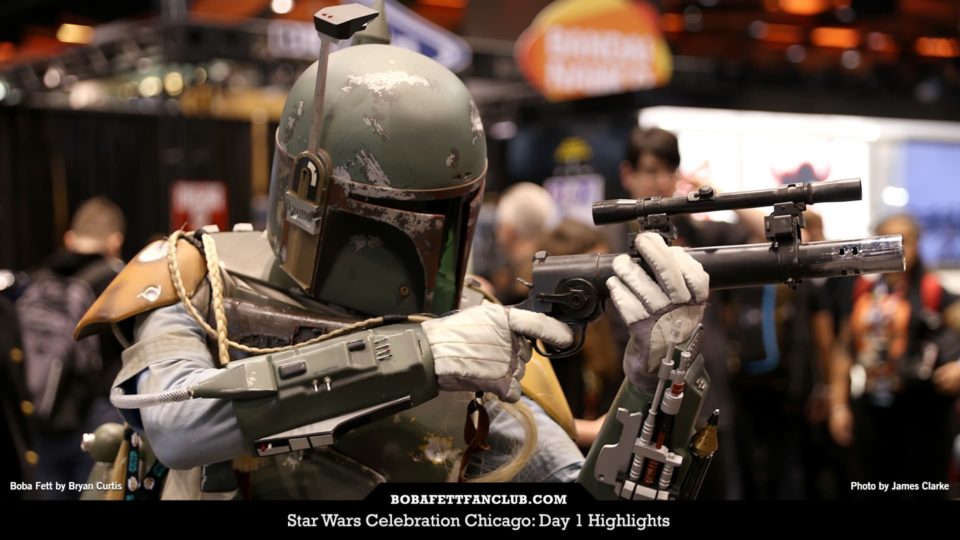 Before the lines opened, EFX opened up pre-orders online for their 1:1 screen-accurate, wearable Boba Fett helmet. Sold exclusively in the U.S. through BAIT, and internationally through Amerang, the factory-made helmet is selling for $379. In person, the EFX booth had one on display. The production paint job was pretty impressive.

Close up of the new EFX #BobaFett, now available for pre-order: https://t.co/fOr8nAtVXn

This is the helmet they manufactured in bulk, not the demo prototype anymore on display; the factory paint is great for a production run

Many fans admired the big mural at the opening of the convention. It was nice to see Jango Fett and Boba Fett represented, although the “Empire Strikes Back” panel featured a “Return of the Jedi” Boba Fett:

#SWCC: The saga banner! Anyone else notice the ROTJ #BobaFett on the ESB panel?

Stance also revealed their Ralph McQuarrie Boba Fett socks, available at the show in limited quantities but also easily available on their website. This was a welcome change, as usually their convention-timed Boba Fett socks are exclusives, but this one is not the case.

Funko has their “Blue Chrome” Boba Fett, available through a lottery system, which fans either loved or hated. The gold version was also released at about 9pm Pacific on Box Lunch, the exclusive U.S. vendor, for just $15.

We caught up with cosplayer Bryan Curtis aka “ESB Fett” and got some fun photos and videos with him, including this GIF moment:

This happened today at #SWCC. pic.twitter.com/q78MNlsQ4l

Even though Fett isn’t expected in “The Mandalorian,” we like following the fellow Mando. The logo for the show was revealed along with its November 12th release date. It will air exclusively on the new Disney+ streaming service, which will cost $6/month.

Logo for #TheMandalorian revealed moments ago by Disney's @RobertIger, as part of the first look and flagship show for Disney+. pic.twitter.com/2m0rzFs9Rd