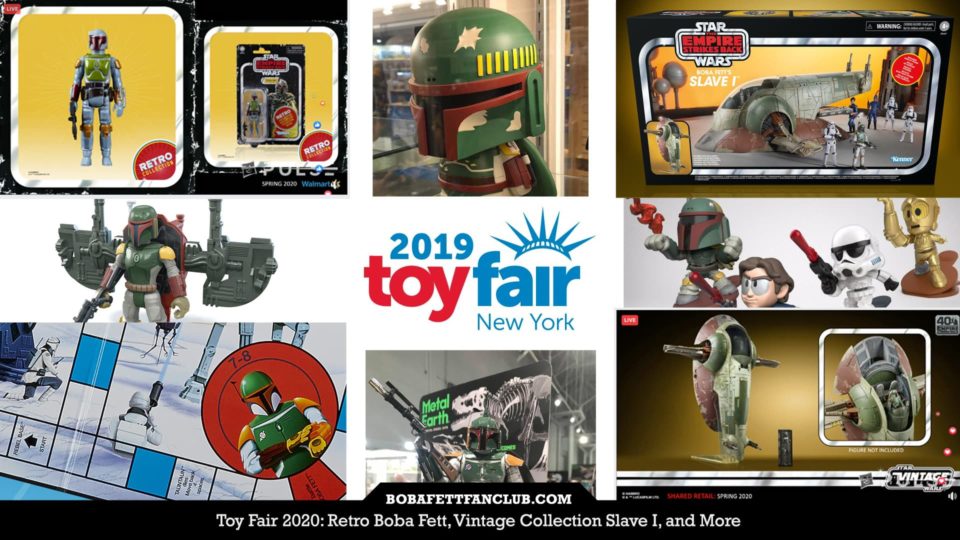 Toy Fair 2020 is under way and Saturday brought forth a lot of Boba Fett reveals.

During their panel, Hasbro featured their 40th anniversary of “The Empire Strikes Back” offerings, which included the “Retro Collection” Boba Fett (sold out at Walmart after 45 minutes but in stock at Zavvi for a few bucks more; use code FANCLUB for free shipping) and a re-done “The Vintage Collection” Boba Fett’s Slave I (pre-order now on Hasbro Pulse). This was the first time seeing the new Slave I, which has been rumored for a while now.

Hasbro also showed off their Battle Bobblers line, which includes a Boba Fett vs. Han Solo two-pack. (Thanks to Jedi Temple Archives for taking the screenshot.)

They’re also re-releasing the 1980 Hoth Ice Planet game, which includes cool vintage Boba Fett art on the board. It’s already up for pre-order on Amazon.

As of that’s not enough for Saturday, Hasbro also had the new Galaxy of Adventures 5″ scale Boba Fett on display. Fantha Tracks took a great photo of him with Vader.

Yesterday, we also got our first look at a new Mission Fleet series, which includes Boba Fett.

Following the success of their Slave I and Boba Fett helmet models, their booth showed off a new Boba Fett figure model.

Special thanks to Collector’s Cantina for the photo.

Part of a series of coin banks for many characters including The Mandalorian, Monogram showed off a new Boba Fett bank.

Special thanks to Fantha Tracks for the photo.