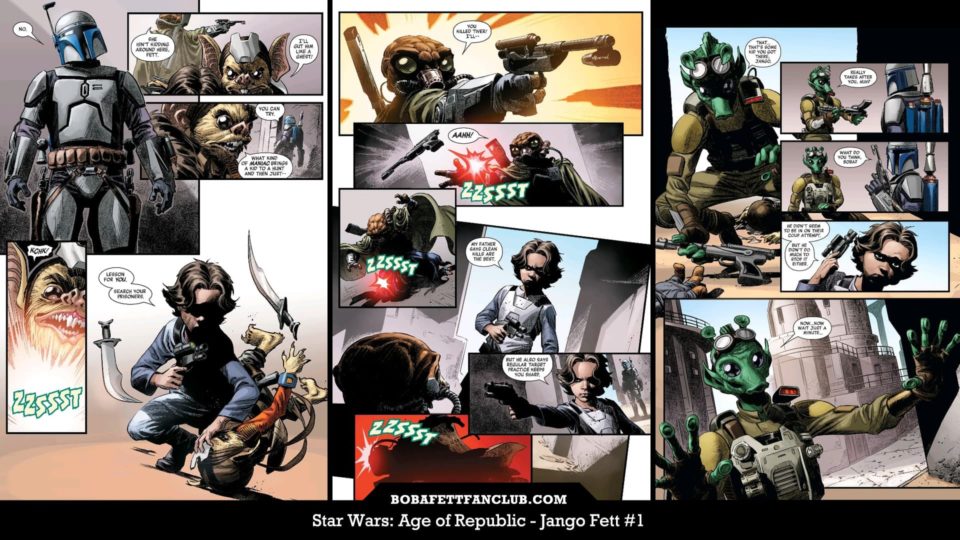 Star Wars: Age of Republic – Jango Fett #1 is the latest entry in the aforementioned comic book series, and our first glimpse into the new canon lore for Jango Fett. We start out with a ragtag group of bounty hunters discussing an easy job they were hired for. The hunters are joining forces with Jango Fett and are puzzled as to why he would accept a mission that is far beneath him. Rumors circulate concerning what we know to be the Clone Army project: that Jango has found steady work with one client and that they are rich enough to be his only client. As Jango joins them, it is revealed that he is accompanied by a young Boba Fett. Jango explains that this mission is part of his training and the hunters depart.

Aboard Slave I, Boba wonders why they can’t work with bounty hunters that they already know. Jango Fett explains that Boba must learn to deal with the “unknown factor.” Boba Fett asks if his father can’t simply take the jobs he wants. Jango explains that although he can, it took a long time to reach that point.

It’s here that we get our first flashback. It is the meeting where Darth Tyranus recruits Jango Fett to be the clone template of the Grand Army of the Republic. They meet on one of the moons of Bogden; in fact, we knew this ever since Jango told Obi-Wan as much during Attack of the Clones. Sadly, this is also where the new canon continues to phase out the Expanded Universe (aka “Legends”). In the video game, Star Wars: Bounty Hunter, Jango Fett was hired to capture a Dark Jedi named Komari Vosa. This ordeal is orchestrated by Tyranus in order to find the best template for the Clone Army. This time around, it seems that Jango Fett’s reputation alone is what draws Tyranus to recruit him.

Back in the present, the bounty hunters have located their target, a runaway woman who sought to be with her lover. However, he immediately ditches her when the hunters surround her. She ends up stumbling off a balcony, only to be caught and stunned in midair by Jango. Boba and the Rodian bounty hunter Neelda are amazed; Tiver and Rinn not so much.

As they head back to their ships, Jango tells Boba that he knew her fall was a possibility because “desperate people make stupid decisions.” This foreshadows the next immediate event: Tiver and Rinn betray the Fetts and ambush Boba. Pressing a sword against his throat, they demand that Jango relinquish the bounty to them in exchange for Boba. To their surprise, Jango refuses. As Tiver begins to question what kind of “maniac” would bring their child to a hunt, they are suddenly shot by a blaster. Jango had given Boba a backup weapon; it had remained hidden because the hunters did not think to search him. Boba shoots down Rinn and holds Neelda at gunpoint. Jango tells Boba that it is up to him whether to let Neelda go. Boba decides to do so because the Rodian was not in on the betrayal. However, because he didn’t do much to stop it, he must forfeit his share of the bounty.

As they fly away, Boba wonders if he made the right decision. He says he let Neelda go because he wants others to know what happens when they cross Jango Fett. “When they cross either of us, you mean,” replies Jango. Although the hunters got the drop on Boba, Jango gives him credit for his retaliation. This is summarized in the last quote of the comic: “You shot well. You trusted your judgment. And you’ve started building your reputation. A father couldn’t ask for a better start for his son’s legacy.” 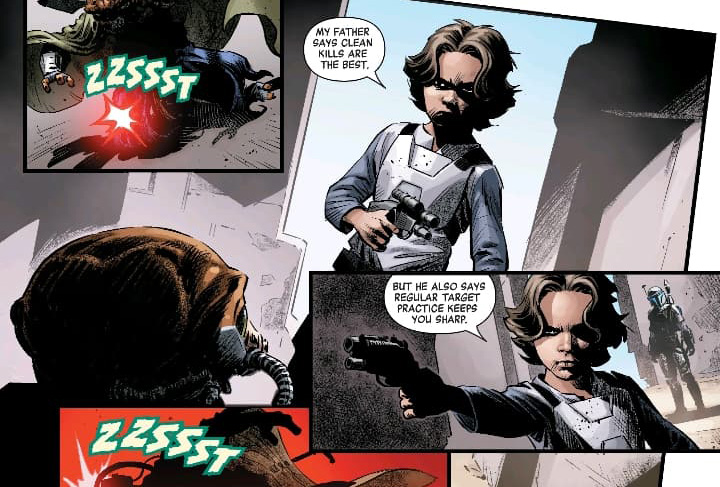 I must admit that I was fairly skeptical going into this comic. Jango and Boba Fett are not always portrayed well in the Star Wars universe. They are sometimes misunderstood or portrayed less effectively than they should be. However, this story did right by both Fetts. Jango is shown to be an excellent mentor who trusts his successor, Boba, to apply what he has learned. Boba unexpectedly had his moment in the spotlight and this foreshadows the legendary bounty hunter he will become by the time of the Original Trilogy. It seems that the Fetts also exhibit a moral code: they are merciful to Neelda since he didn’t betray them and thus do not needlessly kill him.

We are also given insight into the way Jango Fett thinks. In a brief flashback on Kamino, we see that Jango is not very proud of the clones. He sees them as “livestock bred as cannon fodder.” In contrast, he raises Boba as a son and teaches him what is needed to survive as a bounty hunter. As far as Jango is concerned, Boba is his true legacy.

The artwork has a crisp, basic look to it. For a short comic such as this it’s acceptable, but I prefer the more lush work done by Chris Scalf on the comic Star Wars: Blood Ties. The overall writing for this comic is better than I expected and could have told a longer story if needed. Whether intentional or not, it still leaves much about Jango Fett unanswered, such as how he acquired his Mandalorian armor.

Star Wars: Age of Republic – Jango Fett #1, a one-shot issue with six variant covers, is a solid entry in the maxi-series of comics currently produced by Marvel. They cover three eras: Age of Republic, Age of Rebellion, and Age of Resistance, which take place during the prequel, original, and sequel trilogies respectively. Eight characters are selected for each era: four heroes and four villains. Boba Fett will be featured during Age of Rebellion in a short story such as this one. With cautious optimism, I look forward to it.