So there’s two parts to this. First, my critique of the Disney Store, and second my review of the figure.

Let me start this by saying the staff at my local Disney Store have always been amazing. My family has participated in many special events there beyond that of just their Star Wars events. I know this was orchestrated well above them on national/international scale.

When all the new Star Wars stuff dropped back in September I hit up the Disney Store as part of my rounds checking out the new stuff. They had out their TFA Elite Series die cast figures, and I was handed a brochure for OT and PT figures that had staggered release dates. This one is laid out differently but it’s single sided so easier to share. 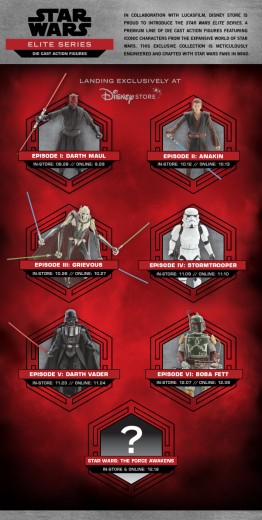 I briefly considered getting all 7 but given the $25/ea. price and knowing I had a couple of open pre-orders that would be hitting soon I decided to just wait for Boba. After putting a reminder in my phone I pretty much forgot about anything related to these for 2 1/2 months.

Fast forward to December 7th. I had deliberately arranged my schedule to be working later in the evening to pick up a couple of Boba’s and run some family errands. At about 5 after 10:00a I walk into the Disney Store looking for him. Not on the shelves… Not behind the counter… “Excuse me, do you have the Elite Series Boba Fett?”

This is where I got really annoyed and confused. “No, I’m sorry, they don’t come out until 1:00p” (OK…) “But you can come back at noon and put your name in.” Huh? Now I’m wishing I had brought that brochure with me.

“Oh, OK.” So off I go to breakfast with my wife. Now what? I’m supposed to be somewhere at noon. So I spend breakfast wrestling with what to do. Do I really want it? How badly? It’s online tomorrow but will I get one that way?

Finally I say screw it. I get to my noon appointment early and cut it short to go back to the mall. I walk back into the Disney Store and see an associate with a clipboard. She must be who I need to talk to. “I’d like to put my name in for Boba Fett…”

“OK, can I see your ID?” (WTF?) “sure…” I hand her my license to surprised and confused to do or say anything else.

“Because you have to wait for the drawing.” (*%^%!!!) This is a raffle? Are you for real? “So limit 1 per?” Yep. I look at the slip she handed me with my license explaining the rules and sure enough, drawing at 1:00p. “Was this advertised at all? The brochure I had picked up didn’t say anything about this…” “Well we’ve done them all this way.” -_- “OK, thanks.”

So I spent the next 45 minutes on a bench outside the store surfing the web on my phone looking for ANYTHING that would have told me it was a drawing. Now I’m not the best at web searching on my phone, desktop preferred, but I couldn’t find anything on these figures being a limited release, let alone a drawing. (2 weeks later still haven’t found any official thing from Disney about these figures being raffled away.) I’m also wishing I hadn’t had to drop my wife off to double my chances.

So I head back in at 1:00p to find the associate with her box of name slips and hang out for the drawing. Fortunately my name is the 3rd one drawn so I don’t have to sweat it out. The associate hands me a slip with my name on it and I head to the check out behind the first two winners. I get to the cashier and hand her my slip. “Can I see your ID?” Again? Is this for real? I hand over my license. She checks it off and grabs Boba from behind the counter and places it next to the scanner. 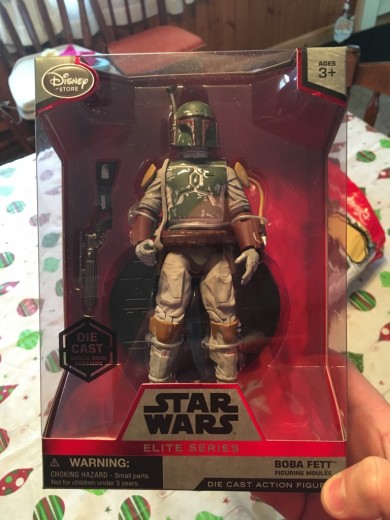 I look at it and the first thing I notice is that his antenna stalk is bent. Are you kidding me? Now I’m really thankful I didn’t try for them all. I briefly consider asking for a different one but that just means someone else in line behind me gets screwed. I realize I’m completely over this whole mess and just buy the one they gave me. When I get home I pull out the brochure and sure enough there’s NOTHING about the figures being limited or raffled. Better yet, I look at the picture of Boba again and guess what. The antenna stalk is bent. IN THE BROCHURE PHOTO! They’re all like that. Are you kidding me?

I didn’t open mine but I did find a really nice video review of the figure unboxed by TheCollectorsHutt.com. Click HERE for the video review. The biggest gripe I have with the figure is that his gauntlet hose connects right to his jetpack instead of disappearing up his sleeve. I want to be mad about the bent antenna stalk but all the promo material shows it bent so I guess joke’s on me there. Also his shoulder pads look like they’re about to pop off because of the sculpt.

Compared to the other TFA elite figures on the shelf at the store (and due to it being die-cast metal) sure, this is a $25.00 figure. But for a limited release item, and having to go through a raffle (or stay up until 3:00a or whenever Disneystore.com rolls over) Disney should have put a little more effort in. For a limited release raffle prize I would have paid $50.00 no problem for a better looking figure. I guess I’m saying the reward doesn’t match the effort. Not just the effort I made to acquire it, but the effort Disney (didn’t) put in to this promotion. No advertising or publicity regarding it being raffled? I wonder how many other people showed up at Disney stores at opening just to find out they had to kill three hours just to get a shot at getting one (for any of the figures).

Now I’m in a relatively small market. Our store got 16 Boba Fett figures, and conservatively 3 people walked away without one, and that’s after there were a couple of no shows. So in hindsight I’m relatively confident I could have managed to get all 7. But how many people trying to do the same missed out on a complete set? It just doesn’t seem like Disney really thought this one through completely.

(Re-published with permission. Originally published at The Boba Room.) 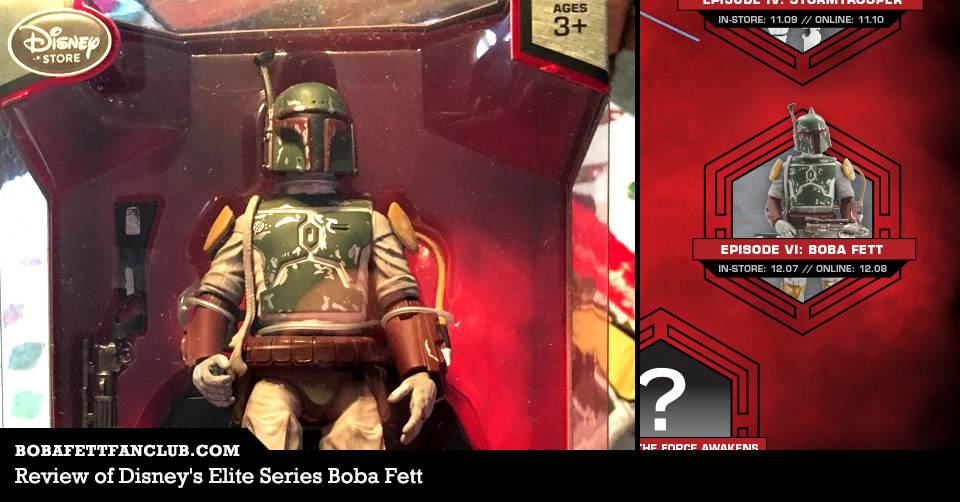