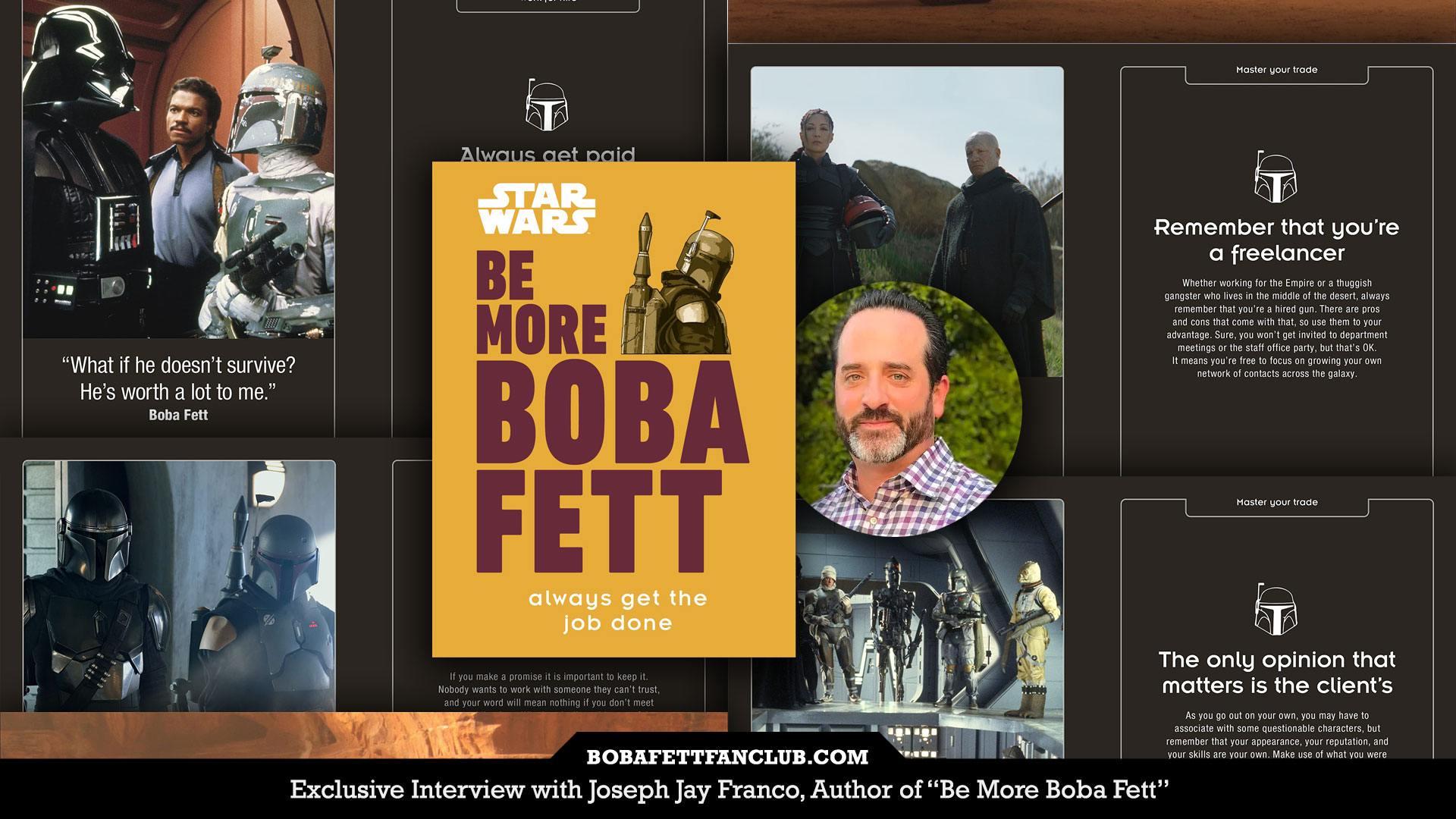 Before the Sarlacc, Boba Fett spent most of his life as a hired gun, working for others while still being his own boss. And while most freelancers aren’t beholden to clientele that could feed them to a Rancor (although it may feel that way), as the new, pocket-sized book “Be More Boba Fett” shows us, Fett’s story can teach us how to be a successful independent contractor. Boba Fett Fan Club got the chance to talk to author Joseph Jay Franco about his devotion to the galaxy’s greatest bounty hunter, his writing process and why it’s important to always have a contingency plan.

Boba Fett Fan Club: Tell me about your background – have you lived the freelance life?

Joseph Jay Franco: I’ve worked in book publishing in NYC for the past 25 years or so. But there was a period back in 2007 where I lost a job and decided to freelance for a few years. I relied on my wide contact base to find work, scrape together deals and make myself indispensable — I did it for about 3 years. It’s a hustle life. 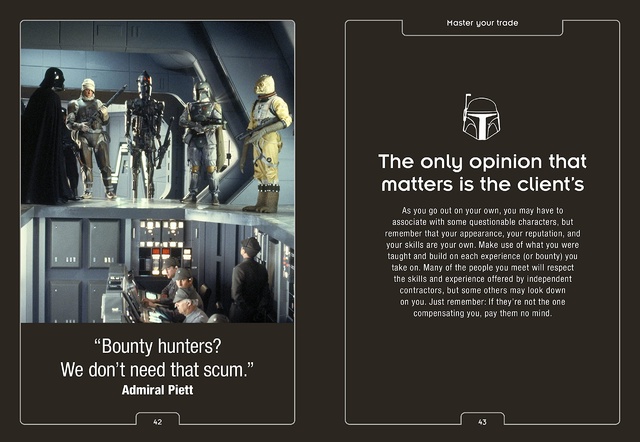 BFFC: Why do you like Boba Fett, and why should people aspire to be more like him?

JJF: I’ve always thought Boba Fett was awesome. At first it was his armor, weapons, even his gloves I loved. Then it was the way he carried himself, even amongst the other bounty hunters you can tell Boba Fett was different. He shows that no matter your field of work, you can carry yourself with pride and confidence to do your job well.

BFFC: What is your favorite Boba Fett moment?

JJF: My favorite scene is when he flies off Jabba’s skiff to confront Luke. Others cower at the thought of facing a Jedi, but not Boba Fett, he directly confronts him, and I love that look on Luke’s face as he lands. I can argue all day about how that fight unfolds but I love his fearless attempt to confront Luke in this scene.

BFFC: What was the inspiration behind writing “Be More Boba Fett?”

JJF: I love the “Be More” series of books from DK, and I worked there in Sales at the time, so when I heard they might do one of these books focusing on Boba Fett, I knew I had to take my shot at this, as he’s always been my favorite Star Wars character. I submitted my proposed outline and a chapter sample immediately. The rest is history. 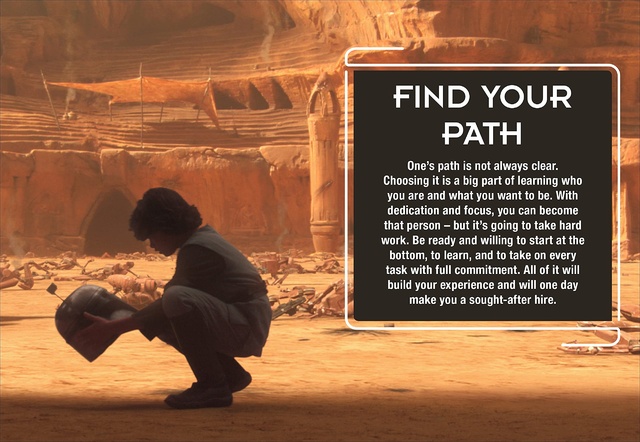 BFFC: What was the research and writing process like?

JJF: I worked as closely as I could with my editor in the UK who suggested starting by thinking of quotes and scenes before writing the text. You need to work backwards on a book like this, as the scene and quote guides the text. Also with Boba Fett having so few lines in the original trilogy there were some challenges, but having access to The Mandalorian and The Clone Wars content really evened things out.

BFFC: As you were writing, were there any Boba Fett scenes that really stood out in your mind?

JJF: I really liked going through the Cloud City scenes in Star Wars: Episode V The Empire Strikes Back. Boba Fett is present at the meal when our heroes are surprised by Vader, and makes his case to Vader staking his claim for Han Solo. He’s in the carbon freezing chamber weapon at the ready, and I love how he lures Luke along toward the trap and he makes his escape with “…Capt. Solo in the cargo hold.”

BFFC: Did you have ideas for the art and quotes that accompany the text?

JJF: I suggested all of the images and quotes for each of the spreads and wrote the text to go along with each of them. There may have been a few small tweaks and changes to the images or text but most of what I submitted made it into the final book. 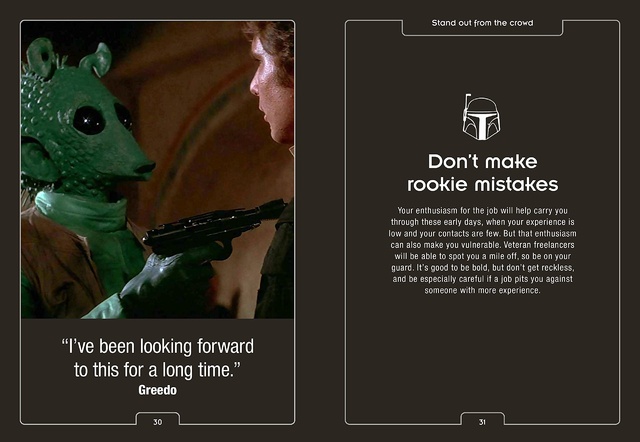 BFFC: What is your favorite piece of advice from the book?

JJF: My favorite piece of advice from the book is, “Have a contingency plan.” It was the first image I put in my draft, that shot of Luke cutting Boba Fett’s carbine in half (that scene still upsets me). This adage is so true in life, things go wrong, you get knocked down (even if not always into the Sarlacc) and it is important to have a backup plan. You may not always need one, but it’s real handy when you do.

BFFC: Is there any advice that didn’t make it into the final version of the book?

JJF: Hmm… I had an alternate idea or two to use, but it was a rough idea that I didn’t end up needing (see, having a backup plan is always a good idea). It had something to do with avoiding smugglers at all costs, because they’re just trouble, or something like that. In the end it wasn’t needed, but it was an idea I could have fleshed out if needed.

BFFC: Who should pick up “Be More Boba Fett” and why?

JJF: I think any Star Wars fan would enjoy this book. In addition to the classic and newer Boba Fett quotes and scenes, there are memorable quotes from C-3PO, Darth Vader and even the Imperial officers. There is practical advice on how to stay sharp and hone your skills that can be applied in any field; it’s a fun book. And although I’ve always known we’d see the legend Boba Fett return, it’s an exciting time to see the rest of the world see it too. Long live Boba Fett!

Be More Boba Fett: Always Get The Job Done
2021AVAILABILITY

115 clicks
Affiliate marketing disclosure
When you make a purchase through clicking on a vendor link at BFFC, we may receive a small commission. We hand pick links for official merchandise to vendors with great reputations with their costs, shipping, and customer service. We are independently run and make our own decisions — nobody tells us what to do. Best of all, there is no extra cost to you. All proceeds go towards our costs to be online. Thanks for your support!
Enjoy this post? Consider sharing it on Facebook and Twitter or adding a comment below.
You can easily share this page with this short URL: