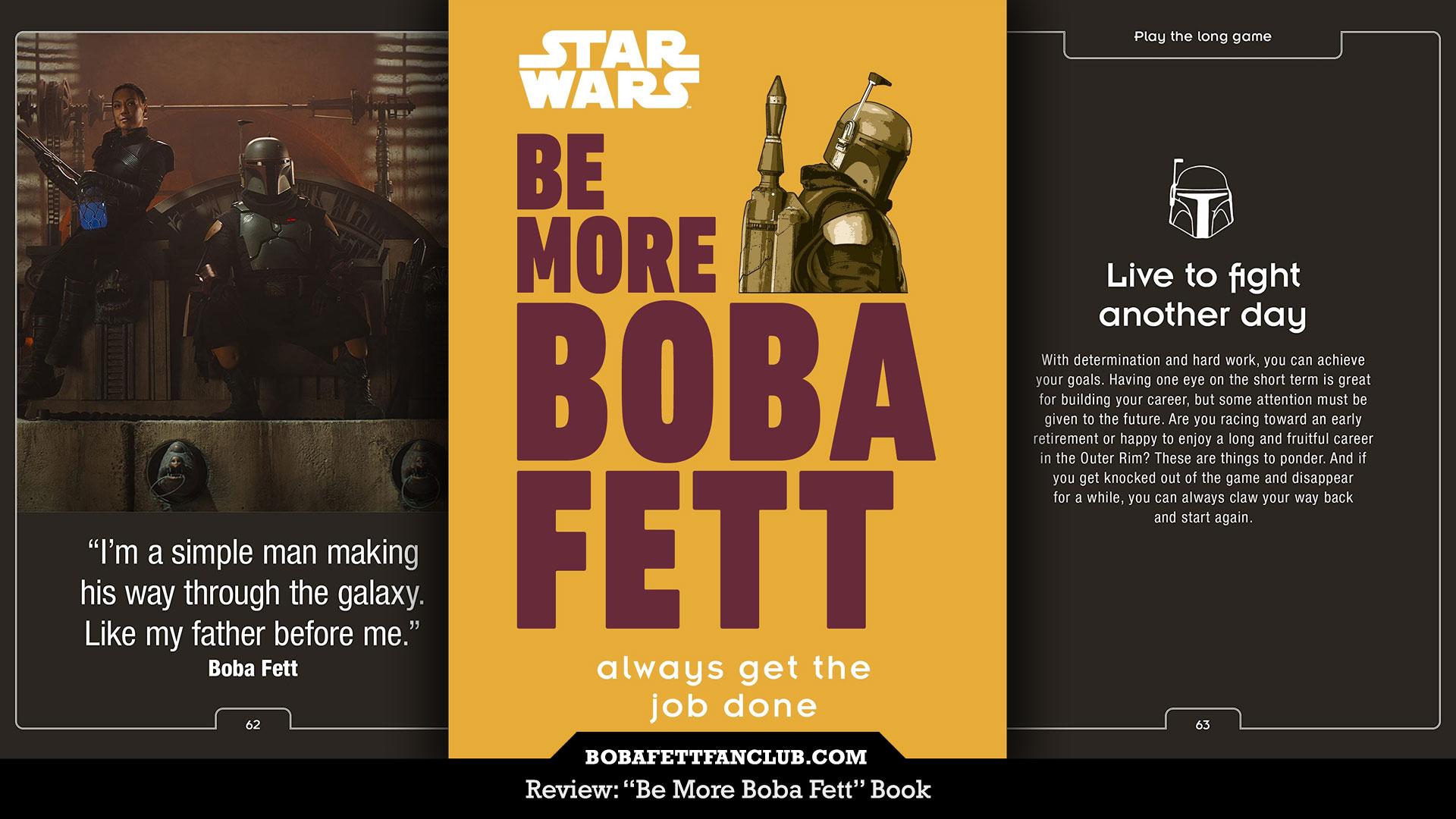 “Be More Boba Fett” is the latest in DK’s “Be More” pocket-sized line of books (also available for Vader, Leia, Lando, Yoda or Obi-Wan), and this installment delves into how to “always get the job done” as a freelance by taking advice from the galaxy’s most infamous bounty hunter. While the book itself is short, author Joseph Jay Franco – whose “devotion to the return of Boba Fett has never waned,” according to his author bio – has written a funny, easy-to-read, Fett-reference-filled guide to being a successful contractor. Get your IRS Form 1099’s ready and let’s jump in.

The full-color hardcover book features scenes and quotes from a variety of Star Wars media, including the prequels through the original trilogy films, “The Mandalorian” and “The Clone Wars” animated series on one page and advice on successful contracting inspired by Boba Fett on the opposite. The quotes come from characters like Jango Fett, Bossk, Aurra Sing, Din Djarin, and of course, the man himself, and, for the most part, illustrate each point Franco is trying to make well.

It includes five sections on topics like “Find your path,” “Work for hire,” “Stand out from the crowd,” “Master your trade” and “Play the long game.” 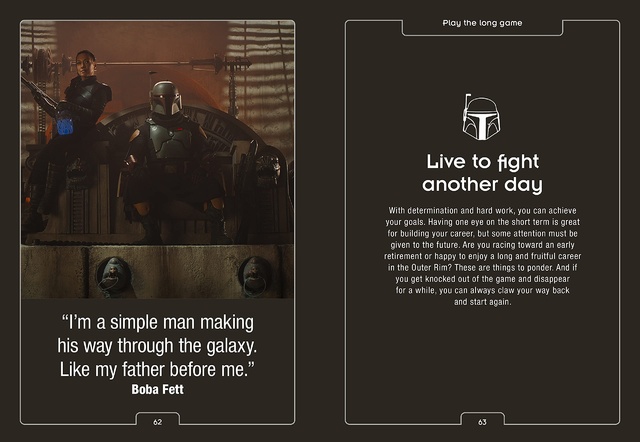 The intro to the “Find your path” section begins with the heartbreaking still of young Boba holding Jango’s helmet after the First Battle of Geonosis from “Attack of the Clones.” It really hammers home the reality for many who are at the beginning of their freelance journey — it’s often lonely and you may feel discouraged at times. But cultivating mentors and business partners can help in the process until you’re ready to really go solo. 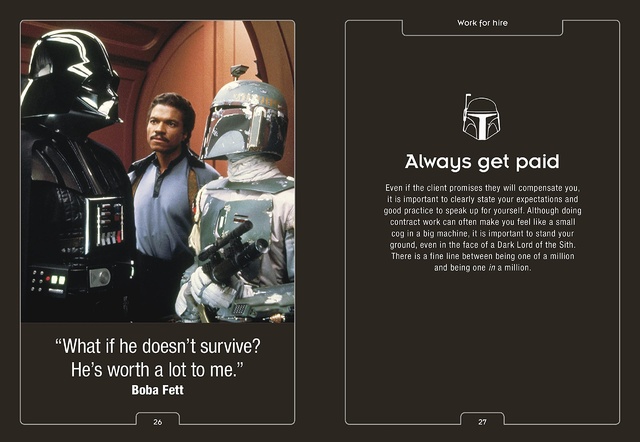 As a freelancer myself, I personally connected to the advice that “The only opinion that matters is the client’s,” as well as “Always get paid.” One of the first things I learned as a freelancer was that you’re being paid to make the client happy, even if you disagree with some of the choices they make. And I don’t want to get into how many times I’ve had to chase after payment because my invoices have been ignored, although, to be fair, I wasn’t working for anyone as particular as Darth Vader at the time. 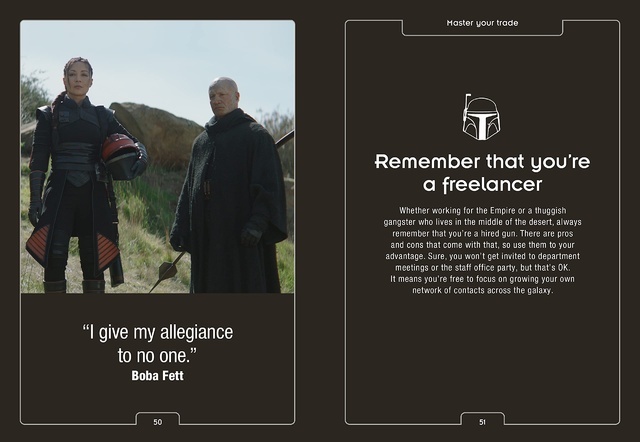 I laughed out loud when I came to the “Know when to subcontract” page, which was accompanied by an “Attack of the Clones” still of Jango telling fellow bounty hunter Zam Wessell, “We’ll have to try something more subtle this time, Zam. My client is getting impatient.” After all, the attempted assassination of Senator Amidala was a masterclass in the practice, with Jango subcontracting the job out to Wessell, who essentially subcontracted the job to an ASN courier droid and the deadly Kouhun worms.

“Have a contingency plan” was another highlight. “What if a half-blind smuggler slammed your jetpack into malfunction, causing you to get eaten by a giant, pit-dwelling monster?” Franco writes. “Would you know what to do next?” While I’m still waiting for The Book of Boba Fett to hopefully answer that in a canon-compliant way so I’ll know what to do, the point stands.

One criticism I have, as I alluded to above, is that some of the quotes and images don’t necessarily revolve around Boba Fett’s experience, but rather, another character’s. For example, on the page opposite to advice about “outfitting yourself with the right gear,” the image is a still of Paz Viszla flying outside the Razor Crest with his jetpack, along with Din Djarin saying, “I gotta get one of those.” While the Mandalorian Chapter 3 quote does illustrate the point, it would have been great to instead include either a moment in which Cobb Vanth is in Boba’s armor or a moment after Boba gets his armor back.

All in all, if you know a Star Wars or Boba Fett fan who’s tired of dealing with 9 to 5 corporate culture and ready to strike out on their own, you should definitely get them this book. It just might help them with any metaphorical Sarlacc pits they encounter on their journey. As Franco concludes, “If you get knocked out of the game and disappear for a while, you can always claw your way back and start again.”

Be More Boba Fett: Always Get The Job Done
2021AVAILABILITY

106 clicks
Review disclosure
BFFC was provided with a free product in return for an honest review. All thoughts and opinions expressed herein are those of the author and not influenced by the manufacturer and/or its affiliates in any way.
Affiliate marketing disclosure
When you make a purchase through clicking on a vendor link at BFFC, we may receive a small commission. We hand pick links for official merchandise to vendors with great reputations with their costs, shipping, and customer service. We are independently run and make our own decisions — nobody tells us what to do. Best of all, there is no extra cost to you. All proceeds go towards our costs to be online. Thanks for your support!
Enjoy this post? Consider sharing it on Facebook and Twitter or adding a comment below.
You can easily share this page with this short URL: