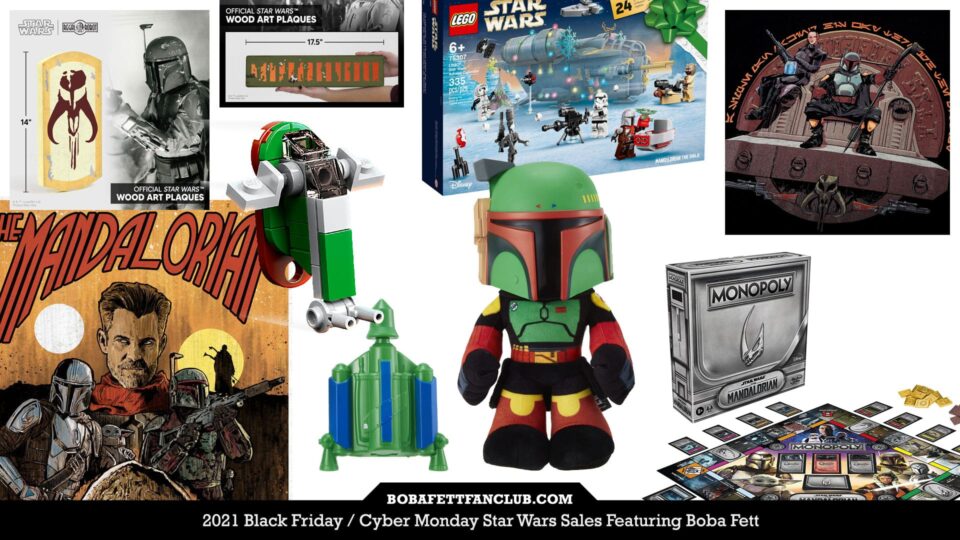 Shopping for yourself or a friend/fan/lover? This round-up can help. We also have a separate holiday guide and holiday ornaments list.

Note: the boxed image/link goes to more info within BFFC (where we catalog all official Boba Fett collectibles) whereas the named vendors or adjacent product names go right to the off-site shops.

It took some recon but we know now there are two versions of the new “The Book of Boba Fett” Boba Fett plush.

One has a voice changer and it’s not easily available. (It’s supposed to be at Walmart.) The other just has the rocket firing jetpack and it’s 25% off at QVC.com.

Each day this week, shopDisney has had a different coupon code style sale on ShopDisney.com. Check it out to save a little.

As of Monday, the Hot Toys “Glow in the Dark” Cosbaby Boba Fett is available to pre-order from shopDisney. Use code CYBER for a discount.

You can sign up to get email updates on their Black Friday sale on their website. While they recently revealed a diorama, it was accidentally put up on shopDisney before it was supposed to, and a different figure was sent to those customers instead – a re-packed Fett.

The new Beast Kingdom Jango Fett is 10% off via Sideshow Collectibles. Use code BF21 at checkout. It also includes free U.S. shipping.

Use code THANKS25 for 25% off on AcmeArchivesDirect.com. The sale ends Monday, November 29 at 11:59pm Pacific.

The Star Wars artist, who recently did “Bounty Collected” featuring Boba Fett’s ship Slave I, is doing 50% off all fine-art prints and canvas on Oktopolis.com. There’s also free shipping for orders over $30.

Starting Wednesday 11/24 and running through to next Wednesday 12/1, you can subscribe to the official Star Wars magazine on their website and save 44%.

You’ll get 8 issues for just $44.99 USD (newsstand price is $79.92) and that includes free delivery plus an exclusive subscriber cover every issue!

The Black Friday sale at Heroes & Villains has already started with all of their official Boba Fett merch now on sale on HeroesVillains.com.

Wednesday, November 24th is the last day to get up to 50% off select Star Wars styles on HerUniverse.com. They’re also doing free shipping with $75 purchase online and before taxes, shipping, and handling. Other terms and conditions apply.

For other days through Cyber Monday, they have different sales. The last one ends on November 29th at 11:59pm Pacific.

“Protect #Grogu from Imperial Enemies.” The official “The Mandalorian” Season 2 version of Star Wars Monopoly is currently 52% off on Amazon. Boba Fett is a piece in the Hasbro board game plus featured on the board itself.

You can get 20% off the LEGO Star Wars Advent Calendar right now at Walmart.com. The set includes everyone’s favorite starship, Boba Fett’s Slave I.

Update: Walmart sold out before the end of Cyber Monday.

As part of Lucasfilm’s “Bring Home the Bounty” campaign, released at 6am Pacific on November 23rd, Regal Robot revealed two great new Boba Fett inspired wood art plaques – Fett’s iconic Mythosaur symbol and the “kill stripes” from his helmet as a nearly stealth geek bit of decor! They’re both debuting at a sale price of $24.99 (reg. $29.99) through Monday, November 29, and they have limited quantities to ship in time for the holidays so folks should get their orders in early.

Are we missing something cool? Let us know in the comments.