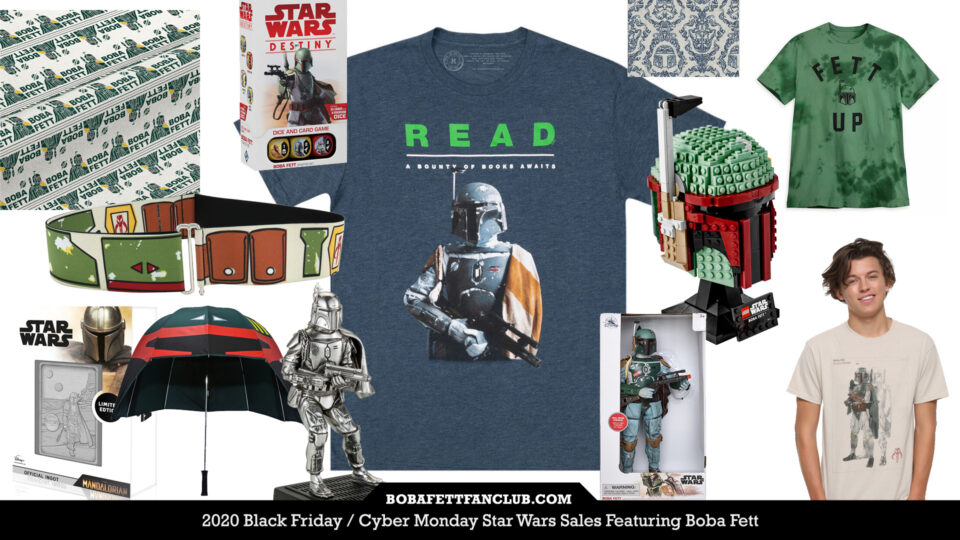 Shopping for yourself or a friend/fan/lover? This round-up can help. We have a separate holiday guide and holiday ornaments list.

Note: the boxed image/link goes to more info within BFFC (where we catalog all official Boba Fett collectibles) whereas the named vendors or adjacent product names go right to the off-site shops.

“Inspired by the vintage READ® posters by the American Library Association during the 80s and 90s,” and where “each purchase helps to fund literacy programs and book donations to communities in need,” Out of Print has two sales: 1) buy one, get one Star Wars tee free November 27-28 and 2) get 30% off your order, including Out of Print’s Star Wars collection, from November 29-December 2. They have the Star Wars Read Boba Fett t-shirt in unisex fitted and women’s relaxed fit styles.

This company has Boba Fett crew socks, a lanyard, a lapel pin, patches, a backpack, a t-shirt, 360 crew socks, and more. They’re doing 20% off select Star Wars items from November 24-30.

Originally a Heroes & Villains item, the Boba Fett umbrella is available through Her Universe now, where they have up to 50% off November 19-27, and November 29-December 1.

These two were SDCC exclusive, but you can easily get both the first one and/or the pop art raglan.

They also have the Boba Fett cinch belt with the same sale noted above.

BoxLunch originally had the Boba Fett utility seatbelt belt, but now Her Universe carries it on sale.

This shop is doing a Black Friday sale as well, featuring many of the same designs as Her Universe, plus more like this woven shirt.

Deal Price: $79.99 • Street Price: $99.99
The Hasbro Black Series “Prototype Armor” #BobaFett helmet can also be found for 20% off, which ends up being $20 off at GameStop. This is their biggest sale yet. Back in September, they only did 15% off for a short bit before going back to the full MSRP. [UPDATE: Sale is now over.]

Deal Price: $55.99 • Street Price: $79.99
Announced on Saturday, Amazon is doing a 30% off discount, so not as good as GameStop, but an option if you’re more comfortable/familiar with them.

The Star Wars: Destiny starter set featuring Boba Fett is on sale: 36% off on Amazon.

Not Fett, but the LEGO Mandalorian Battle Pack set (75267) with non-descript characters from Season 1 is $3 off on Amazon.

You can also get 10% off on the Royal Selangor Boba Fett Tumbler at Sideshow plus get free U.S. shipping.

You can get 20% off sitewide from November 25-27, although currently both the Slave I Ship with Boba Fett and the Talking Boba Fett Figure are on steep markdown already.

They’re also having a deal in their Fett Up shirt and their screen art shirt: get 25% off with code PARKS25.

One of the Boba Fett icon designs is on sale at Amazon. PopSockets’ official site is also doing a similar sale.

The “Dark Side” and the “Saga” rugs by Ruggable both feature Boba Fett. You can get 20% off Ruggable’s Washable Star Wars Rugs from November 27-30 with code STARWARS or BFCM20.

From now thru Black Friday (11/27), you can get free shipping on these officially licensed, limited edition Star Wars ingots (including one more featuring The Mandalorian) from Zavvi with code FANCLUB at checkout.

The magazine is doing subscriptions for 44% off, which is 8 issues for $44.99. Get the discount on their Titan’s unique landing page. Offer ends 12/2.

Well-known officially licensed Star Wars artist Joe Corroney is doing his annual Dark Side Friday sale from 11/26 to 11/29. He’s doing 40% off all items and a free Star Wars print with purchase. Use code SITH at checkout.

Many metal posters to choose from at Displate, all officially licensed with unique designs not often seen elsewhere (if at all.) They have three variant sales: buy 1 or 2 for 33% off, buy 3 or 4 for 37% off, or buy 5+ for 41% off. Use code BLACK at checkout. End date not published besides saying “soon” on their site.

Our 9 anniversary designs will be on sale for Black Friday on 11/27 and again on 11/30 in our TeePublic shop. All classic t-shirts will be $13 and everything else up to 35% off.

This year Regal Robot is starting Black Friday on 11/25 and going until 11/30. They’re doing 20% off select Star Wars decor as well as all Star Wars directors chairs and cafe tables, plus a few select items for 25% off.

StarWars.com has an annual list, but we’ve combed through it for Fett merch. If you’re collecting other characters, be sure to see what they’ve got in general.

Are we missing something cool?

Let us know in the comments.