The year’s “Force Friday” has three Boba Fett items unique to the marketing event that can be found in stores like Target:

Hot Wheels’ Boba Fett / Bossk two pack, which was initially released last year, is a re-pack for “Force Friday.” It’s the same product now with the cardback for “The Last Jedi” wave. Variant collectors, this is for you.

Hasbro’s Boba Fett / Han Solo two pack is unique for “Force Friday,” although it showed up in stores well before the embargoed date of September 1. We got to see this one up close unboxed at San Diego Comic-Con.

One of Hot Wheels’ Slave I releases is also getting the re-pack treatment, again with the white backdropped “The Last Jedi” cardback instead of the prior, darker look shown here.

Regal Robot’s New Mandalorian Skulls now come with a plaque, pewter finish, or with a display stand. They are new additions to the existing release of a large one and a small one. See their announcement for info. Get 10% off site wide with discount code REGAL10.

Yellow Bulldog’s Boba Fett sweater, which was made extra famous when Jeremy Bulloch wore it, is on sale today. See their website for details and use FORCEFRIDAY15 at checkout for 15% off.

Released earlier in the week, but lumped together with some “Force Friday” posts such as one at StarWars.com, Spencer’s has a new line of Japanese-inspired apparel. Boba Fett appears on some of the designs. See our exclusive review of some of those products.

Check out Entertainment Earth for several exclusives only available through them, plus many “open” items.

Note that this is the second “Force Friday” event after a debut in 2015 in advance of “The Force Awakens.” The following year was called “Go Rogue,” which was the same sort of thing, tied in with “Rogue One.”

In both cases, Lucasfilm and their licensees hope to make it a big reveal, usually with some new characters we’ve yet to see in an upcoming film (e.g. Porgs). Also in both cases, images and the toys themselves often get revealed early, leading to a tug-of-war with fan sites reporting details and DMCA takedown notices to often unsuspecting fans just sharing their fandom.

One thing that’s been lacking with the official released is a formal checklist. Even the official post on StarWars.com, while illustrated with great press photos, selects certain items and skips a thoroughness that leaves a lot to be desired.

Fortunately, popular fan site Yakface toils over the news and even holds onto the list until all of the formal embargoes are lifted. His downloadable cheat sheet is a real treat for seeing what toys are actually being released, both for completists to see the full line but also treasure hunters like Boba Fett fans to see what:

Not included in the list are things like apparel and books. Who wants to take on that challenge for next year? May someone rise the occasion. 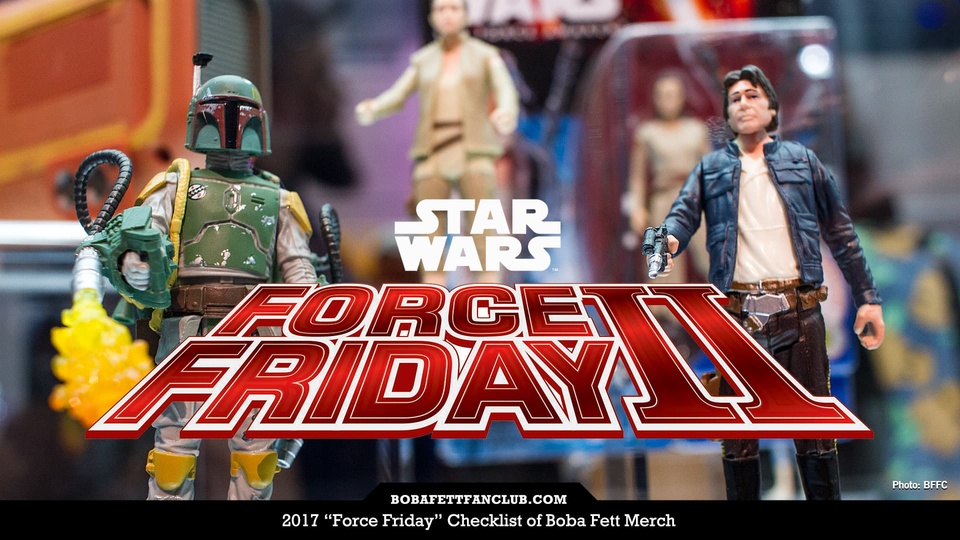