Jon Hamm (“Mad Men,” “Baby Driver”) is confirmed to be the audiobook voice of Boba Fett for the new canon Star Wars book, “Star Wars: From a Certain Point of View.”

The Boba Fett short story is called “Added Muscle” and is written by Paul Dini.

According to the press release, others on the audiobook include “Neil Patrick Harris, Jonathan Davis, Ashley Eckstein, Janina Gavankar, January LaVoy, Saskia Maarleveld, Carol Monda, Daniel José Older, and Marc Thompson.” You can pre-order the audiobook on Amazon.

Past audiobooks have had great actors like Ed Begley Jr., Alan Rosenberg, Joe Hacker, and Tim Glovatsky as Boba Fett’s voice. The 1980 film has the late Jason Wingreen voice Boba Fett and, in 2004, that was dubbed over by Temuera Morrison for assumedly more prequel continuity. For other voice actors, including video games, see our Behind the Mask” Fettpedia page.

“From a Certain Point of View” in hardcover and audiobook form are available October 3. The giant collection of short stories has a total of 496 pages.

The book includes the first piece of written fiction in the new Disney canon with Boba Fett (excluding some Marvel comics and the references to Mandalorian armor outside the Sarlacc in the Aftermath trilogy, which never named Fett).

According to the author, the Fett story is about this: “What a bounty hunter thinks while he’s holding a gun on a couple of deadbeats.”

One quoted used to promote the Fett story is this: “I’d be lying if I said I didn’t enjoy the whispers of surprise when I walked onto the scene. That’s right, boys. Fett’s here.”

Fan reaction to the quote has been mostly negative. This sounds like Robot Chicken Fett, not the original Boba Fett. Some fans even joked that it sounds like Jodo Kast, Boba Fett’s nemesis (in “Legends”).

We shall see (and hear) soon. 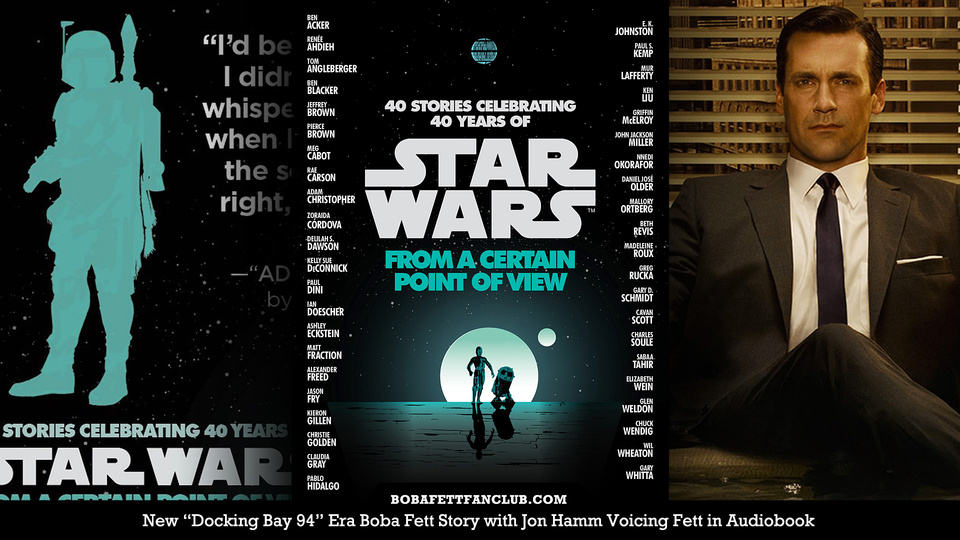