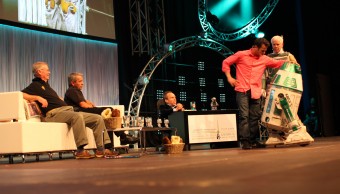 Jeremy wore the Boba Fett costume that he’s been wearing with the “Caravan of the Force” effort. On Twitter, Empire Magazine found this especially awesome:

Ha – Jeremy Bulloch has emerged for the Boba Fett panel in full costume, helmet and all. Are you listening, JJ Abrams? He’s still got it!

Quite a long drop. Dickey Beer says the fall into the Sarlacc was about 40-45 feet, though it was more of a roll than a clear fall. In addition, he was also performing the stunts for Luke Skywalker and Barada in the scene.

Make my day. When John Morton stood in for Jeremy Bulloch during Empire, he received one direction: to think “Clint Eastwood.”

Daniel Logan didn’t really know Star Wars when he got the part. He was really only aware of Yoda and lightsabers, so he thought he was auditioning to be a Jedi. When he was told he would be a bounty hunter, he replied, “What’s that?” And he didn’t know who Boba Fett was. But when he attended Celebration II, he saw what the character meant to people. “I’m the biggest Star Wars fan now.”

Did Boba Fett really go to that big cloning facility in the sky? Not according to Bulloch. “He didn’t die. He gets out of the Sarlacc pit,” the original Fett says.

Boba Fett vs. Wicket. Warwick Davis played a clip from a never-released short film made during the making of Return of the Jedi about his audition process. In the scene, Wicket gets lost on the Death Star and is spotted by Boba Fett, taking a shot at the Ewok who narrowly escapes.

Father/sons reunion. Temeura Morrison, who played Jango Fett, made a surprise appearance for a recreation of the Boba-picks-up-Jango’s-head scene from Attack of the Clones.

The Ewok Fett short film, which was included as an “easter egg” on an early Star Wars DVD release and also starwars.com once hosted on their site in 2008 (but no longer hosts it), has been seen before and we have some still frames in our image galleries.