Premiering December 19, 2010, the third Robot Chicken Star Wars episode will feature an even more flirtatious Boba Fett. The series is from Seth Green, actor/director, who’s known for being a big Boba Fett fan. The show is 44-minutes and is intended for somewhat more mature audiences and airs at 11:30pm on Adult Swim.

Also, IGN.com has an interview with Seth Green and the writer/producer Matthew Senreich, who mentions it’s a new Boba Fett puppet: 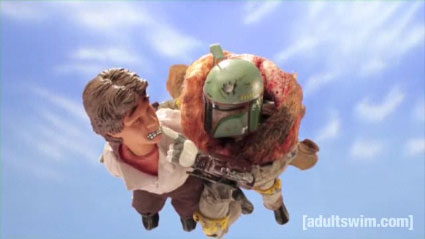