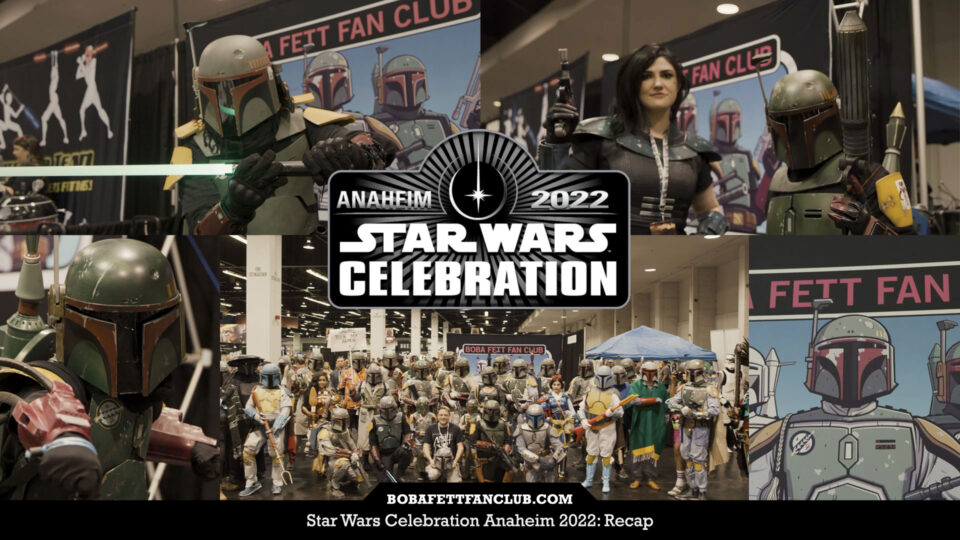 Hundreds of Boba Fett fans stopped by our first-ever booth at a convention, which came to be to help celebrate 25 years online. Our volunteer team happily powered through all the hours across all the days (BFFC Admin, Shiatis, BobaFettTea), plus some assists from even more volunteers (MiggsFett, Gustavo_Perez) — one of which was Boba Fett actor Mark Austin (star of the BFFC fan film series, “No Disintegrations,” soon to dive into Season 2). Our limited edition, convention exclusive (and officially licensed) BFFC stickers were a huge hit, going to just 100 new and old members who logged into our site while at our booth. Our trivia contest delivered a dozen prizes out: 10 socks from Rock ‘Em Socks, one Din Djarin from Gentle Giant, and one Cobb Vanth (chase) from Funko. We also debuted new artwork from Jason Goad in the form of an 8×8 backdrop, which was awesome to get done for this — and maybe other events in the future.

As exhibitors in the fan table area, we were able to load in the day before, set up, and get the lay of the land. It was a treat to run into multiple Lucasfilm employees, one of which knew about our stunt for Saturday at 3pm: getting as many Boba Fett cosplayers together as possible for a shot. He said “we’ll be there” (and they followed through).

Cosplayers rebel_rae_cosplay (IG) and commander_cody_cosplay (IG), josh.tee.ran (IG), and hutchhutchens07 (IG) stopped by. We spoke with Daniel Logan, capturing some of his autograph line. We also documented the Fett offerings from Sideshow Collectibles, DC Shoes, and Kotobukiya.

Cosplayers LoganDominicCosplay, Joey, Hvacdon, FantasticFett, Meganeth66, and a Jango all made it into our recap video. We also showed off a special look at the Fett products from Diamond Select Toys / Gentle Giant, who let us look up close and behind the glass.

In the official stream, you can catch Joe Johnston in the “Light & Magic” panel, although Boba Fett isn’t mentioned. In the Summer of LEGO panel, there are just some small Fett reference, like he’ll be voiced by Dee Bradley Baker in the upcoming “Summer Vacation” special.

With Mark Austin at our booth, and Don Bies stopping by as well, we coordinated the day and time for Boba Fett cosplayers to come together at our corner of Celebration for this moment. We also filmed individuals on their own including Instagrammers no_elrey, lego_fett18, MaycolFett, ShaquilleOatmeal2TheShaquel, WellRoundedBill, JillenniumFett, AmberArden, jaig_eye_hunter, mandalore_the_lego, and turoseeker. Thanks to the many more who participated in the group shot!

The official stream covered the “Behind the Scenes of The Mandalorian & The Book of Boba Fett” panel. Daniel Logan also did an interview on stage; he was joined by his young kiddo (Kayden Brad Logan) in Young Boba Fett apparel, hand-crafted by his wife Kady. Doug Chiang’s “Designing The Mandalorian” panel is also shown.

Cosplayers who stopped by the Boba Fett Fan Club booth on the final day of the show included gomcse, krisgn_cosplay, i_am_ernie_v, Andrew Mayhugh, and 14killstripes.

On the official stream, Temuera Morrison did an interview. It’s also part of the Day 4 stream, too.

The official “Mandalorian Experience” exhibit by Fairview Portals was tough to get into by reservation or stand-by, but we were able to document the Slave I animation (shown above) and screen-used “The Book of Boba Fett” costume on display (coming soon).

Rancho Obi-Wan’s exhibit was almost entirely about Boba Fett. We’ll share more of that in a separate video (coming soon).

We’ll also have some panel reporting from chelseybcoombs, who got into multiple panels.

Rock ‘Em Socks also is interested in keeping things going with an online trivia contest for all those who couldn’t attend Celebration.