The Associated Press photo made the "Most E-mailed" list today at Yahoo.
Update 6/11 - Performance now showing on YouTube.
Update 6/12 - Danger mouse (half of Gnarles Barkley) spoke recently at the Hammer Museum in Los Angeles. He revealed that the costumes were originals, sent over by Lucasfilm 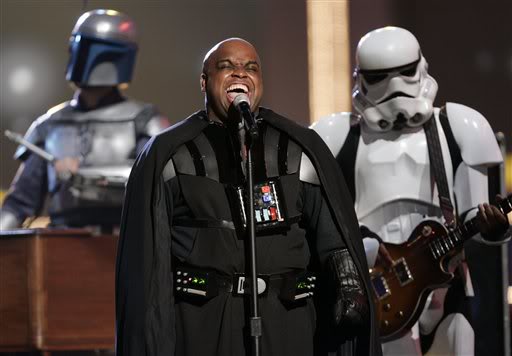 Producer Danger Mouse and rap artist Cee-Lo make up Gnarls Barkley. In April, their first album, St. Elsewhere, was released and available for download on iTunes. The hit song is called "Crazy," which hit #1 in the UK, Ireland, Denmark, Australia, and New Zealand; it's highest point thus far is #35 in the U.S.

At the 2006 MTV Movie Awards, Hayden Christensen won for "Best Villain." Hayden vs. Ewan McGregor lost to -- what a surprise -- Angelina Jolie vs. Brad Pitt in the "Best Fight" category. McGregor was also nominated as Obi-Wan Kenobi, but lost to Christian Bale (Batman Begins) for Best Hero.