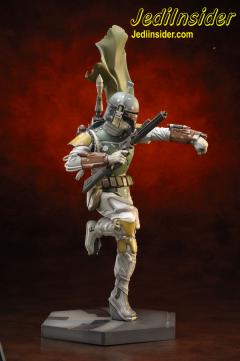 Kotobukiya, in a press release today, shared details on the new ARTFX series in 2008 that includes Dengar, 4-LOM, Zuckuss, Bossk, IG-88, and Boba Fett. JediInsider.com got their hands on pictures.

A KOTOBUKIYA Japanese import! The acclaimed series of Kotobukiya ARTFX Statues expands with the addition of the highest requested characters from the Star Wars universe: THE BOUNTY HUNTER SERIES!

From the darkest chapter of the saga, Episode V: The Empire Strikes Back, Darth Vader has summoned mercenaries from across the galaxy to help him capture Han Solo, thereby luring Luke Skywalker into a deadly confrontation. Six of the fiercest hunters are assembled: Dengar, 4-LOM, Zuckuss, Bossk, IG-88, and legendary BOBA FETT.

The enigmatic Boba Fett stands 11 3/4" tall in a dynamic combat pose, simultaneously flying and firing his flame thrower. His distinctive Mandalorian armor has been replicated with stunning accuracy, with detailing based upon the costume used in Episode VI: Return of the Jedi. Each of the Bounty Hunters will include special bonus parts for you to collect. Once all six Hunters have been released, you will be able to assemble the bonus parts into a brand new, full size Darth Vader ARTFX Statue! A free $100 value given at no additional cost! Fett will include Darth Vader's left arm!

In addition, each of the Hunters will include a unique hexagonal base, which can be linked together on any side, creating a variety of display options for the full series of characters. Line them up as first seen in Empire, or use the Darth Vader as a centerpiece to assemble the bases to create the symbol of the Galactic Empire!

That is a lot of bounty to be hunted, so let's review...

With its large scale and impeccable paint applications, this ARTFX Statue is a snap-fit kit that can be easily put together in seconds without glue or modeling skill. Look for a new Bounty Hunter each month, with the next release scheduled to be IG-88!

See JediInsider.com for 5 other angles.