Q: Your new piece, “Mandalorian Mettle,” iconically shows Boba Fett outside the Sarlacc, which is always an off-screen fan favorite. How did that concept come about?

I was sketching up some ideas just for fun, and had always wanted to get down on a solid Boba Fett image. Anyone who grew up in 80’s likely had a pretty big fascination with that character.

I originally had him just with a plain Tatooine background, but when I showed it to my buddy Chris (also an awesome artist) he suggested I put the Sarlacc in the background, maybe with a tentacle around his leg. I still owe Chris a beer for that one.

Q: Was it an issue to use a non-canon “legend” moment, e.g. showing Fett having escaped the pit? (For a backstory, Fett fans, see our Fett Fact Check on Boba Fett being neither dead nor alive in the new canon.)

It was not! As I mentioned I originally thought of it as just a plain background, so when I painted it up I also kept a plain version of the background intact on another layer. As you can imagine, when submitting work for approval from Lucasfilm they have pretty high standards, and they pour over the work to make sure things aren’t messing with cannon. It can be intimidating, but it’s also an honor to have your work judged at that level. So I knew it would be a risk to add an element in the image that wasn’t already established in the franchise — but they never even mentioned it. They even made notes to help me keep the scale of the Sarlacc accurate- which was really cool. I think that’s proof they’re open to interpretation of his fate that day.

Q: Now that we’re serious geeking here. His ship, Slave I, in the background: autopilot or hijacked? ;-)

Autopilot for sure. I like to compare it to that scene in the 89 Batman when he called for his Batmobile. I like to imagine Boba has Slave One just a retrieval signal away. 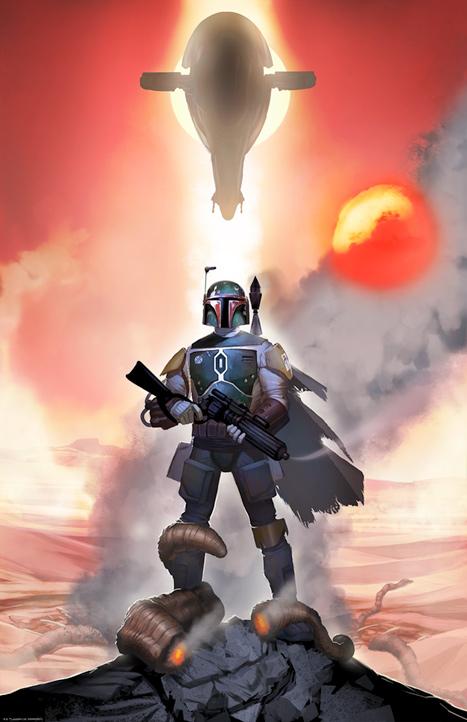 Q: What was your creative process like with sketches thru to the final product?

As I mentioned I just sat down one day and tried some ideas for fun. Sometimes I sit down with an agenda in mind, but usually when I’m just trying to have fun with no pressure I get some pretty good results.

I often start sketches in black and white because it simplifies things, then move on to color when I want to take it further. 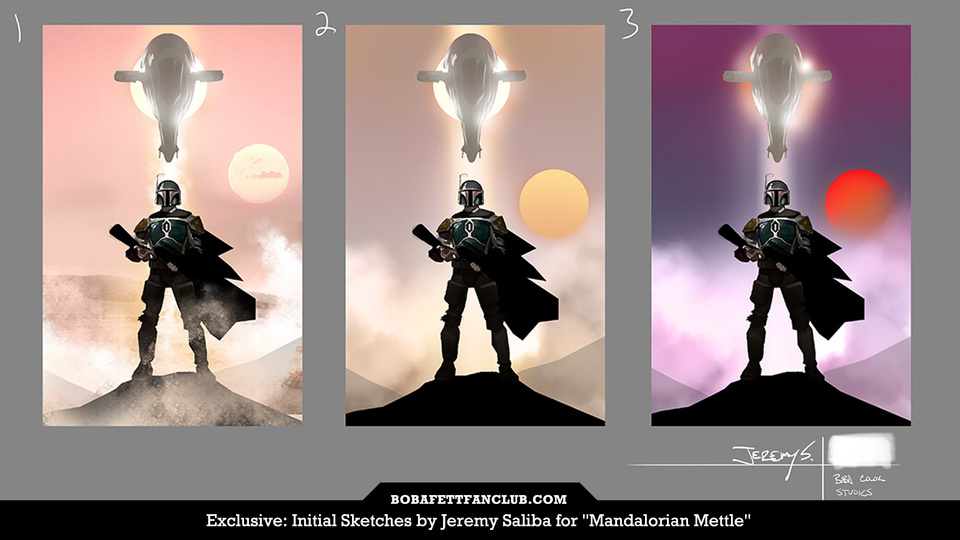 After getting some feedback and some ideas from good friends, I started messing around with color. I looked up some images of Tatooine to get a really clear idea on the color palette there, and it has a wide range- depending on the time of day for example. So I submitted some options and the red/pink hues were a favorite right away.

Q: You’ve also done a series for Image Comics called Black Jack Ketchum, which embodies a gunslinger influenced aesthetic. Some of your other illustrations often show caped, disguised, and other mysterious characters. Was it a perfect fit to bring that to an officially licensed Boba Fett print?

Yes indeed it was. I grew up on super hero comics and grew into a guy who loves westerns. In my mind when you add all that up (and put it in space) you get Boba Fett. He’s the ultimate “Man in Black” gunslinger front those old westerns. Quiet, deadly, and the biggest threat to the heroic gunslinger. Han really feels inspired by a western gunslinger himself, even down to his DL 44 blaster holstered at his hip, and Boba was the one guy who was able to track him down. (Boba’s gun even makes me think of the old Winchester rifles from the old west.) I still dream of a day when we can see them duel it out in some sort of saloon… and with all these new movies, maybe someday we will!

Q: As a long-time Star Wars fan, and having already done “Vengeful Pursuit” and “Lurking Lineage” prints featuring Darth Vader, how is it to do more Star Wars pieces for Acme Archives / Dark Ink Art? How about specifically with the cool new “Rancor’s Wrath” print?

It’s a dream come true. I’m really hoping to get the chance to touch on as many of the big characters as I can while I’m getting to play in this sandbox. I would love to do a Yoda, a Han and Chewie, Leia… all those characters that dominated my childhood growing up.
But with Luke and the Rancor I get to paint one of my favorite themes, which is “David vs Goliath.” I think that theme is a big part of the appeal of Star Wars in general, but it’s something that resonates with everyone. Stories like that also help to inspire me personally; if I’m having a really rough time at any point in my life. If I’m up against something that seems impossible to overcome, I try to dig deep the same way I’ve seen the characters do in all my favorite stories. 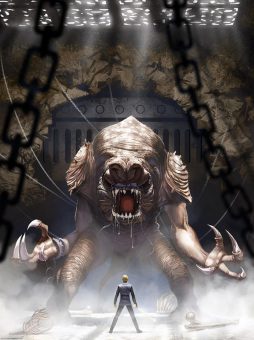 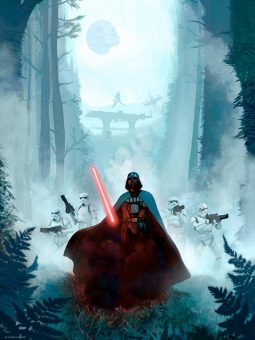 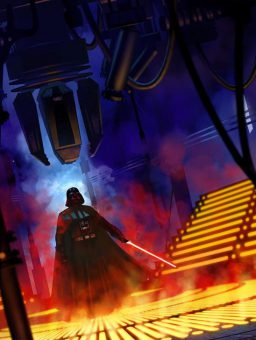 Oh yes! I’m always tinkering with ideas. My approach is to try and find moments in between the scenes of the movies and expand on them, and it’s such a huge universe filled with characters there’s limitless potential.

But I’m working on finishing up a new piece right now that I’m hoping is my best one yet — and I can say it’s another “David vs Goliath” themed image. Hopefully people dig it.

Thank you, Jeremy! Fett fans, be sure to pick up a print of “Mandalorian Mettle,” available right now in limited quantities at Dark Ink Art. 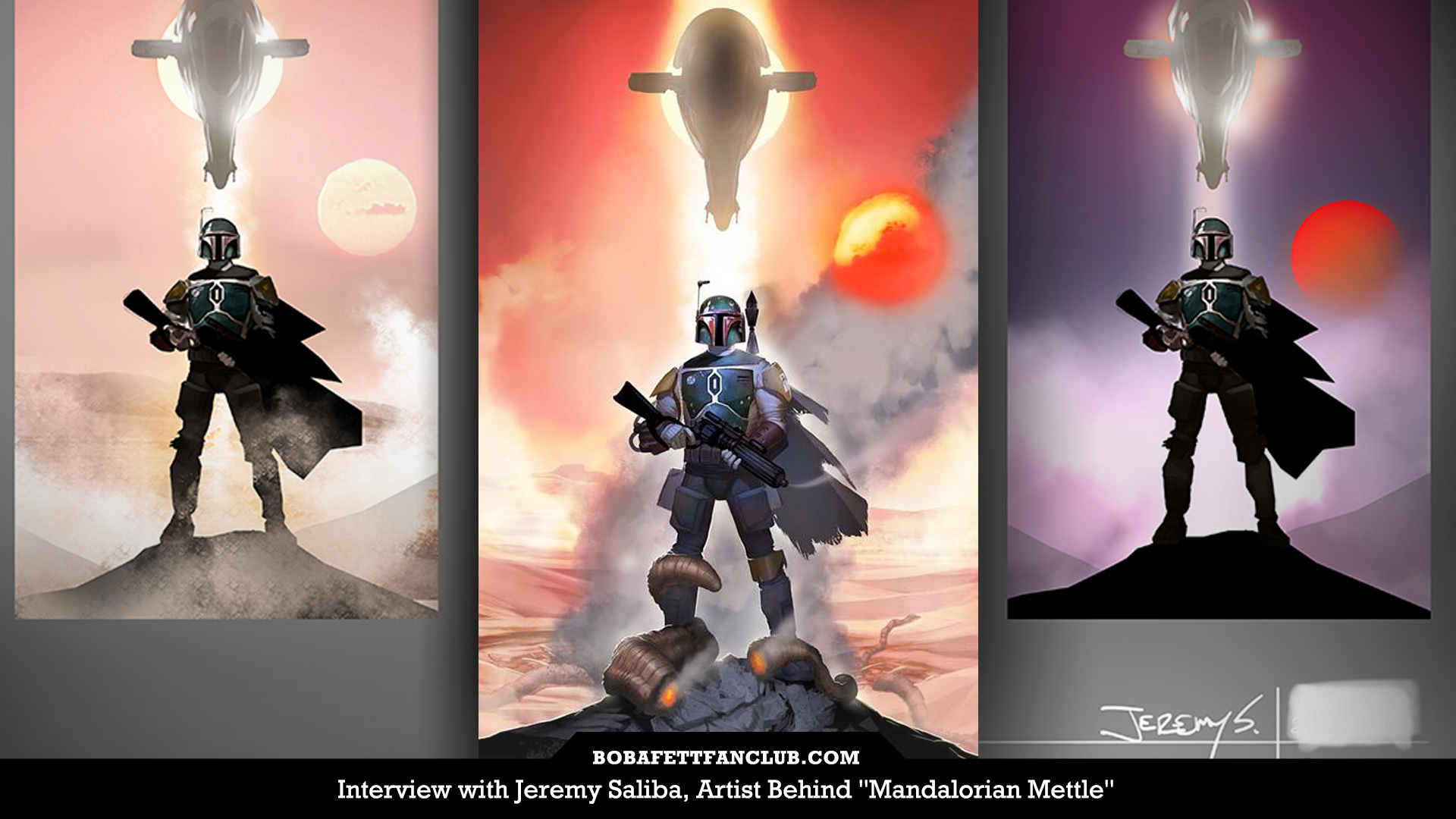