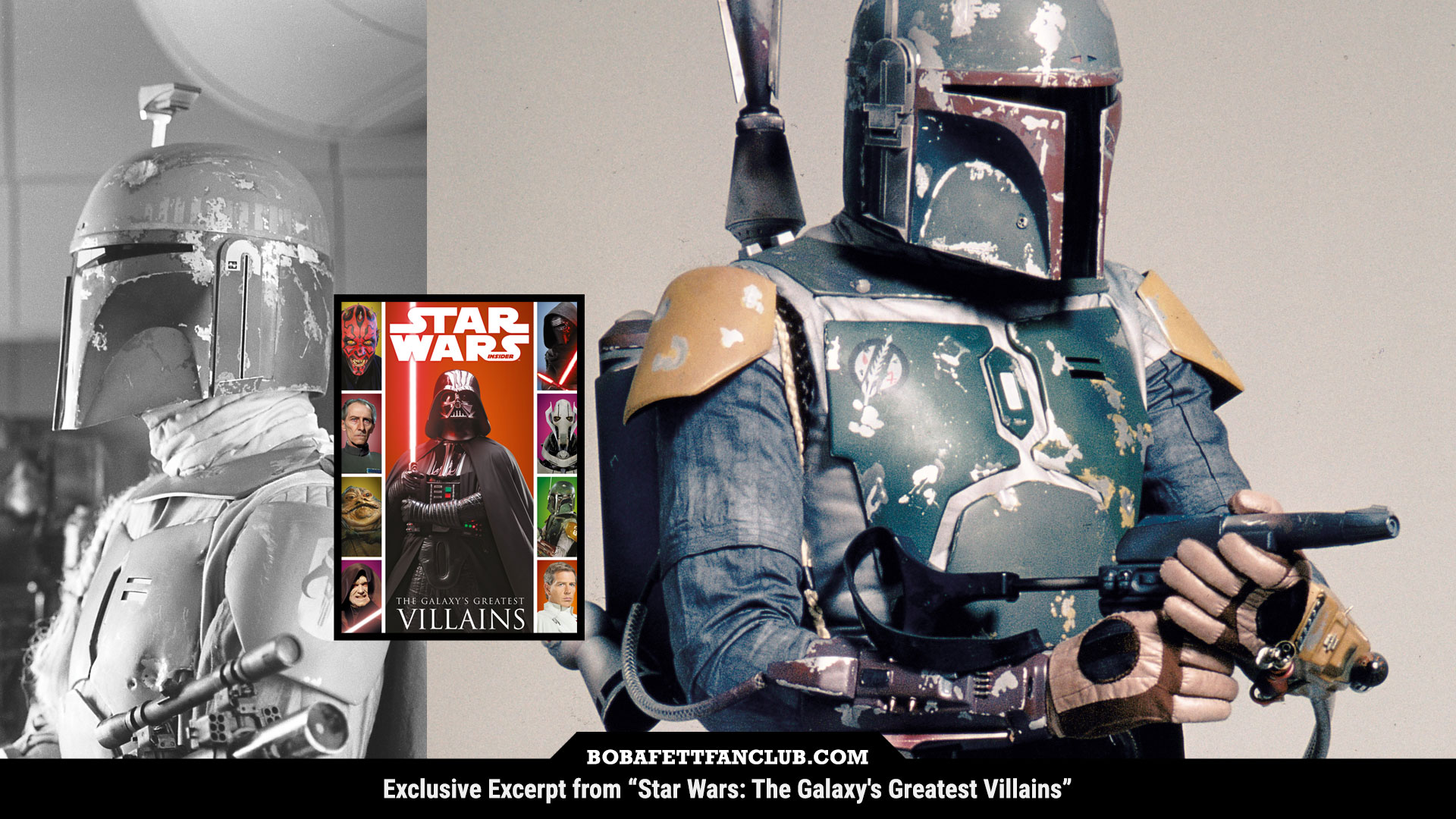 Coming at last on August 30th now September 13th from the publisher of Star Wars Insider, we’re honored to be given an official sneak peek for you to see and read part of the Boba Fett section in advance. Clocking in at 176 pages, “Star Wars: The Galaxy’s Greatest Villains” is truly full of greatness. There’s a massive chapter with Boba Fett including many images — some of which are quite rare. Here’s a little preview:

The bounty hunter Boba Fett made his unforgettable live-action debut in The Empire Strikes Back (1980), where he was played by Jeremy Bulloch. The actor reprised the role for Return of the Jedi (1983), while Daniel Logan later played young Boba in Attack of the Clones (2002).

Before Bulloch played him, the character of Boba Fett was introduced as an animated character in 1978’s Star Wars Holiday Special.

Jeremy Bulloch: I saw the cartoon that Boba Fett appeared in that was part of the show. It was nice to see the character. One of the reasons that Boba Fett became popular is that you could send off for a Boba Fett figure if you bought a certain amount of other figures. You couldn’t initially buy him in the shops. I remember being shown a plastic toy of Fett and I hadn’t even finished the film! I thought that was rather amazing. In those days you didn’t know what the memorabilia meant at all. The amount of stuff that’s been made of Boba Fett is probably second only to Darth Vader. It’s quite extraordinary. 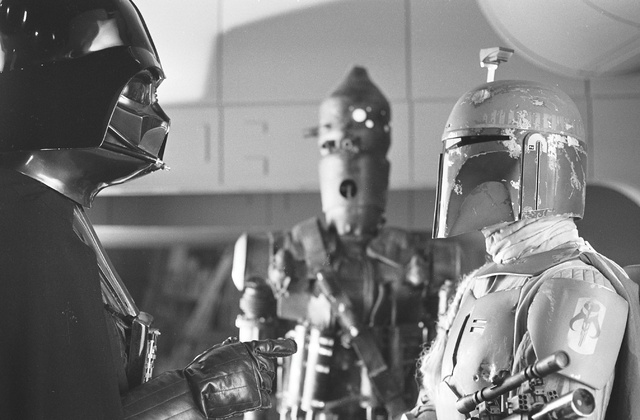 To bring the taciturn, costumed character to life, Bulloch knew he had to perfect Fett’s movements and attitude.

Jeremy Bulloch: Perhaps I put myself down a bit, but when fans say, “I like the bit where you turn round or the way you press a switch,” I say, “Well, I was probably falling asleep at the time!” I was working in the theater at night and luckily as a masked character you couldn’t see that I was tired! I used to stand in a certain way, tilt my head and use small, specific movements. Fett loved his weaponry, so I would cradle the gun in my arms and do things in the hope that the audience would notice.

In Jabba the Hutt’s Palace, as the camera pans across, I would move my head a small amount. As you are doing that, you are working with the camera. The strength of Fett is not action. It is standing totally still, with just the odd movement.

There is a scene in the Special Edition of Return of the Jedi with the dancing girls where he tickles one of them on the chin. I don’t think that’s something he would do. They might hit on him, but he would always be on his guard. There must be many people and aliens after him and he wouldn’t want to be caught with his trousers down!

Daniel Logan: My agent called me. She was literally screaming, and said to me—out of breath, like she’d been running—that she’d gotten me an audition for Star Wars. I didn’t have a clue what StarWars was. At that time I’d been booked for every job I was going for, so I said, “Well, send me the script and I’ll get this one too!” That’s when she humbly replied, “No Daniel, you don’t understand. This will change your life and your career. You’re most likely not going to get this job, but I will forever be able to sell you as the kid who auditioned to be the kid who was in Star Wars.”

That’s when I did a little bit of research. Most people don’t know that I was brought up in New Zealand, and we only had three TV channels. I was 13 years old, growing up in the period between Star Wars: Return of the Jedi (1983) and Star Wars: The PhantomMenace (1999). There had been a 16-year gap with no Star Wars.

I watched The Phantom Menace, so I figured I might be a Jedi. The casting director, Robin Gurland, asked me a bunch of questions, one of them about what I knew of Star Wars. Out of everyone that auditioned, I think I was probably one of the only kids who replied that I’d never really seen Star Wars. That might’ve been the thing that helped me get the part—the fact that I was a fresh, new person with no preconceptions. That I was a clean slate. 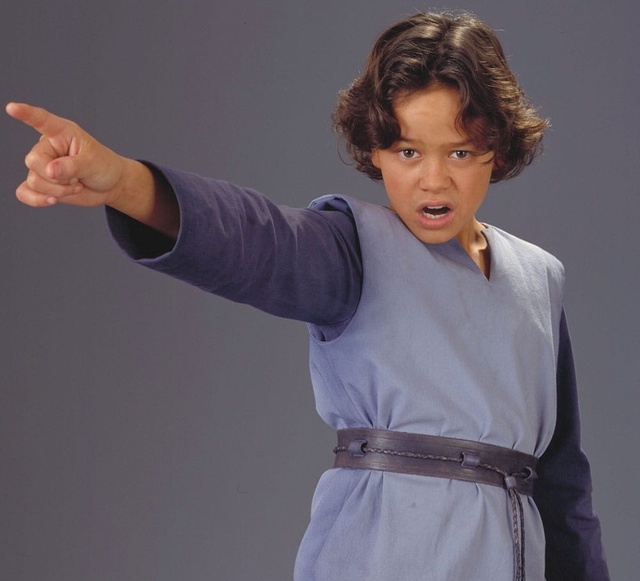 Behind the Scenes: Daniel Logan as Young Boba Fett

Logan had just one audition for Attack of the Clones, where he told casting director Robin Gurland about his “special talent.”

Daniel Logan: I told her a little white lie and said I knew, professionally, how to use the Taiaha — a traditional weapon which is a stick that’s been carved to use in one-on-one combat. Then she insisted that I show her how to do it, without having a stick. Obviously it was Star Wars, so we used our imagination and creativity. She had me imagine that I was a little Darth Maul character, and I ran around a hotel room pretending I had a double-handed lightsaber, as she moved the camera around and filmed me… I’ve never seen it, but I’d really like to.

Curated from the pages of Star Wars Insider, go behind the scenes to discover how the most terrifying Star Wars villains were brought to the screen in this incredible collection of in-depth interviews and articles. The actors and filmmakers behind 15 of Star Wars’ most popular villains discuss the process behind creating some of the most iconic characters in cinematic history. Includes David Prowse (Darth Vader), Ray Park (Darth Maul), and Ian McDiarmid (Emperor Palpatine), with input from George Lucas, Lawrence Kasdan (writer: Star Wars: The Empire Strikes Back (1980), Star Wars: Return of the Jedi (1983), and Star Wars: The Force Awakens (2015)), J.J. Abrams (writer, director: The Force Awakens and Star Wars: The Rise of Skywalker (2019)), to name just a few.

50 clicks
Affiliate marketing disclosure
When you make a purchase through clicking on a vendor link at BFFC, we may receive a small commission. We hand pick links for official merchandise to vendors with great reputations with their costs, shipping, and customer service. We are independently run and make our own decisions — nobody tells us what to do. Best of all, there is no extra cost to you. All proceeds go towards our costs to be online. Thanks for your support!
Enjoy this post? Consider sharing it on Facebook and Twitter or adding a comment below.
You can easily share this page with this short URL: