The Empire in retreat, Luke Skywalker is on a quest to rebuild the Jedi. But before he can revive that elite corps of protectors, he must first rebuild himself! He has spent time as the Emperor's thrall, and the taint of the dark side still tugs at his subconcious. Can he pull together the Jedi, can he pull himself together, before the New Republic loses the upper hand, or will the Empire take root once more?

The long-awaited second chapter in the biggest Star Wars series of all time is here! Tom Veitch and Cam Kennedy, the creative team of Star Wars: Dark Empire, have reunited to take you through the action-packed events immediately following those in the first trade paperback! This 168-page trade paperback features all your favorite players, from Luke, Han, and Leia to Lando, Threepio, and the bounty-hunting Boba Fett! Dave Dorman has put together an out-of-this-galaxy painting for the cover of this collection, and all 12 of the paintings featured on the covers of the original two series are included within! When you pick up your copy of Star Wars: Dark Empire II, you'll want to strap yourself in for the experience of a lifetime!

2nd Edition (2006) $29.30
More from these vendors
Affiliate marketing disclosure
When you make a purchase through clicking on a vendor link at BFFC, we may receive a small commission. We hand pick links for official merchandise to vendors with great reputations with their costs, shipping, and customer service. We are independently run and make our own decisions — nobody tells us what to do. Best of all, there is no extra cost to you. All proceeds go towards our costs to be online. Thanks for your support! 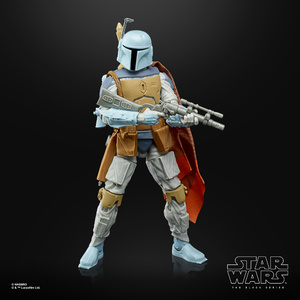