The latest Boba Fett fan film, “Boba and Chess,” made its debut online earlier this week, starting with a thread posted by the filmmaker on Reddit. But the timing couldn’t be better: Boba Fett is trending on Facebook (thanks to a bogus rumor) and “The Force Awakens” is just a couple months away. Take a look at the craftsmanship for this 40-second short film:

Who are you and where do you call home? What made you want to do this project? And what did you enjoy the most during the process?

My name is Miran Dilberovic and I’m from a lovely city on Mediterranean coast, Dubrovnik. Last year I got my Master’s degree in animation and I’m currently working as a freelance animator. When opportunity comes I work as a floor runner on a shows and commercials like Game of Thrones, Dig and just recently Game of war.

As we all know, the new Star Wars movie is almost here. With my 3D career being inspired by these movies, I just felt I had to make something. Didn’t need to be anything big; I just need to get it out of my system.

I had 5 days to do something. Last Monday I was doodling in my sketchbook and, while listening to Lessons by SOHN, an idea just came and I drew the storyboard as a quick sketch. (This song helped me a lot, so maybe it will help someone else.)

One of my favorite parts of the process was getting to the rough animation and animating the camera. I had all the action — now I can take my camera and direct. I just love 3D for that. My virtual camera has everything I need and my actors and stunts do whatever I need them to do … without whining. It’s very rewarding.

We noticed you’re referencing the Millennium Falcon in “The Force Awakens.” How did you come up with the plan to connect a story with that moment or visa versa?

We know that Falcon chase is gonna be big set piece in Episode VII. The idea that Boba is somehow just relaxing on the dunes of the Jakku and the Falcon and TIE Fighter fly over him — disturb his “quiet” time — was interesting for short story form. And it’s very personal for him, seeing that ship after all this time.

Why did you have Boba Fett playing chess with a droid? It’s quite funny! What are your thoughts on the backstory in this world you created? Were there other deliberate choices made, like why he’s sitting there in the desert waiting (especially with 30 years having had passed in the official storyline since “Return of the Jedi” and “The Force Awakens”)?

I have two friends that get together almost daily and play chess. They watch a chess program on TV — I didn’t know that existed! They brag about which move is better, more daring, who’s more clever… like two old men. That stuck with me and I thought that Boba playing chess with an astromech droid — the unbeatable, logical droid in the desert — could be funny and visually interesting.

How is Boba there, after all these years? Well that’s easy. Kaminoans said that he was unaltered clone of Fett, right? Well, my thinking is that he was the only altered clone of them all. His embryo was altered to slow his aging process, all other embryos where created with fast aging, therefore “normal.” So when Boba hit the puberty, sh*t hit the fan and his aging process slowed way down. So that my theory why he’s still alive and kicking after all these years. And surviving the Sarlacc… nothing special, he just lost his small cape and broke some ribs.

Your animation is outstanding. It looks like a big change from your other animation work. What was your process for making this? Which apps did you use? Did you build or skin the 3D Boba Fett model — or work off of any existing 3D models?

Thank you, but all I can see now is the mistakes I’ve done. After finishing storyboarding, I went looking for the models on scifi3d.com, the site that has been my amazing mesh library for the last decade — an amazing site! I took the droid from Staffan Norling, re-textured it a bit, the Falcon from Iven Connery and the TIE Fighter from Al Meerow. I found on tf3dm.com the Jango mesh but without a rig. I re-modeled and re-textured him, added bits and pieces and rigging him with basic bones.

Setting everything up took me one day, animating took three days, and compositing/sound effects took one day. I’ve enjoyed it so much so the work would be 16-17 hours per day. I’ve used Maya and Vray for rendering and After Effects for compositing. The comp file was so messy — full of layers — that I was scared of opening it. Since I’ve exported the Maya camera into the After Effects, I could insert anything and play with it as long as I had time, so there were at least 30 layers in the end.

Instead of making this about a Boba Fett spin-off film, you tied it nicely into Episode VII, which is now just a few months away. You’ve also done a Croatian version, too, which is a nice touch. Where else do you hope this project will go or take you?

“The Force Awakens” is now two months away and I can feel the same excitement that I felt 10 years ago. We have great Star Wars community here in Croatia, especially the forums, where I’ve spent a lot of the time waiting for the Revenge of the Sith. It’s still active and they are prepping for the premiere, which is on December 17 — a day before the US! So while making it I’ve contacted the guys that run the site and asked them if they would use it for promoting the premiere. They like the idea and yeah, that’s it.

I just hope that people like it, that they have something small to see while waiting for the new trailer and release of the Episode VII. I’ve brushed my skills with this project, and I’m already looking for the new one, with our favorite bounty hunter.

Thank you for taking interest in my small project. I love and admire what you do with the community, and I hope we all have great time on December 18th! (Or the 17th for me!) 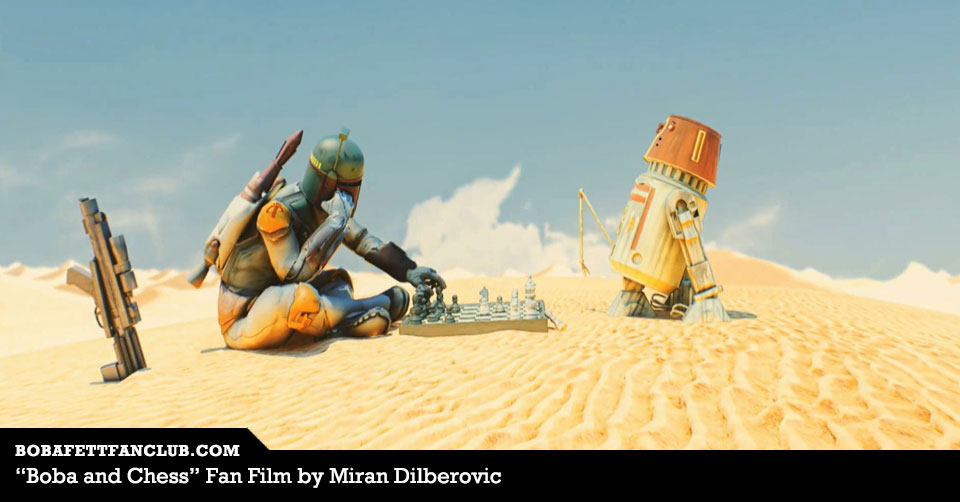