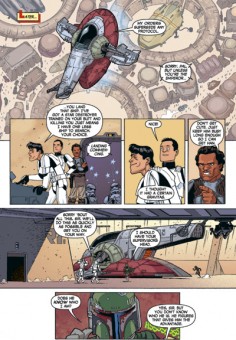 And what an occasion it is. Fans jonesing for more side-splitting Star Wars shenanigans will thrill to the new misadventures of this hapless pair, members of the Rebel Alliance,who have somehow stumbled past the worst Imperial perils with their limbs intact. In The Return of Tag & Bink-Special Edition, the duo set out to rescue a certain smuggler trapped in carbonite-with the help of Lando Calrissian! One thing leads to another, and they manage to subdue the deadliest bounty hunter in the galaxy on their way to infiltrating the Hutt palace. Star Wars fans know what comes next, and there will be guest appearances of favorite characters on the way to the Sarlacc pit, the Death Star, and Endor! This issue will conquer the world!

You can take a peek at Boba Fett's role in this, thanks to the famous DarkHorse.com previews.

The origin story of our hapless heroes begins on their respective planets, Alderaan and Corellia. These future soldiers of the Rebel Alliance are sized up for Padawan potential, and we are treated to a rare inside look at the rigorous mental and physical training undergone by aspiring Knights in the Jedi Temple! Mace Windu, Yoda, Obi-Wan Kenobi, and the elder Fett each have a role in the miseducation of Tag and Bink, but despite all this schoolin', the two decide that spying on Padme and "the Chosen One" is a pretty good idea . . .

Check out the 4-page preview at DarkHorse.com.