First seen at the “Star Wars Collectibles Update with Lucasfilm’s Brian Merten and Dolly Ahluwalia” panel and later at the ANOVOS booth, no additional information was shared such as price or release date.

The Wookiee Gunner attended the panel and saw some additional information on these packs:

According to Art Andrews, founder of The Dented Helmet and The Replica Prop Forum, here’s more info about this pack and it’s history:

I can’t tell you how excited I am about this piece. I remember, years and years ago, when someone at The Dented Helmet obtained ONE generalized measurement from an original pack and how their replica was touted as the “PERFECT” pack due to that single measurement… and here we are, almost a decade later with a pack from ANOVOS that came directly from a 3D scan (thousands and thousands of very precise measurements… thanks, technology!) of the most well-known original pack (no… not the ESB.. stop it). This pack had MINIMAL cleanup meaning much of the original asymmetry and wonkiness still exist in it and is, without a doubt, as close as any of us fans are ever going to come to owning an original. Not only is the pack fantastic, but this is one of the, if not THE most precise paint job of the SE pack we have seen to date (no, I didn’t paint it)! Thanks to the opportunities afforded by ANOVOS (and one private collector), I have researched 9 original packs in person, likely more than anyone I know outside Skywalker Ranch, and after all that study, I can tell you with extreme confidence, if you want THE pack… this is the one to get.

ANOVOS also showed off a Sabine helmet. TheWookieeGunner also captured a photo of the panel slide, illustrating what’s what. 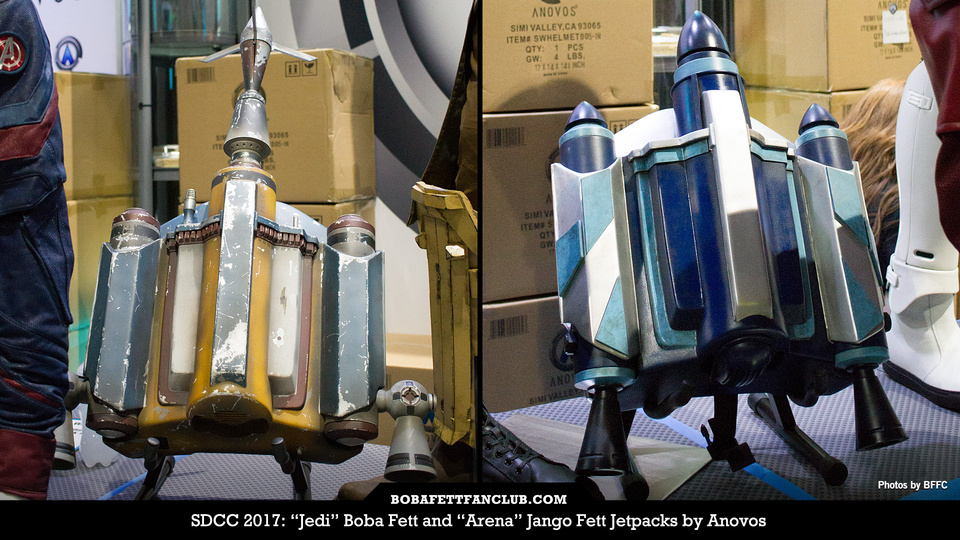