Bagged with Tom Cruise in a supplement October issue of Empire Magazine, The Empire Strikes Back is revisited with an article which features Boba Fett’s role in the carbon freezing chamber of Cloud City. 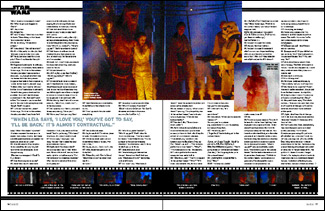 In case you hadn’t noticed, George Lucas’ original Star Wars trilogy – A New Hope, The Empire Strikes Back and Return Of The Jedi – is released on DVD on September 20. So, to celebrate, we didn’t want to do the clich’d, hackneyed thing of simply retreading the making of three of the greatest movies of all time. We wanted to do something special – and so we have. Star Wars: A Celebration is a 36-page supplement featuring new interviews, (Hamill! Fisher! The Bloke Who Played Boba Fett!), features (George Lucas’ Star Wars Scrapbook! Eavesdropping On The Set Of Empire! The World’s Biggest Star Wars Fan!) and fan articles (Kevin Smith! Weta’s Richard Taylor!) galore. Oh, and there is a Making Of’ in there, too, but it’s not quite what you’d expect. We think it’s the best thing since Nien Nunb. We hope you do, too.

Boba Fett was originally played by Jeremy Bulloch. More information on how to pick up the magazine at the official Empire Magazine web site, which provided the preview scan above. This magazine has a tendency of mentioning Boba Fett lately.